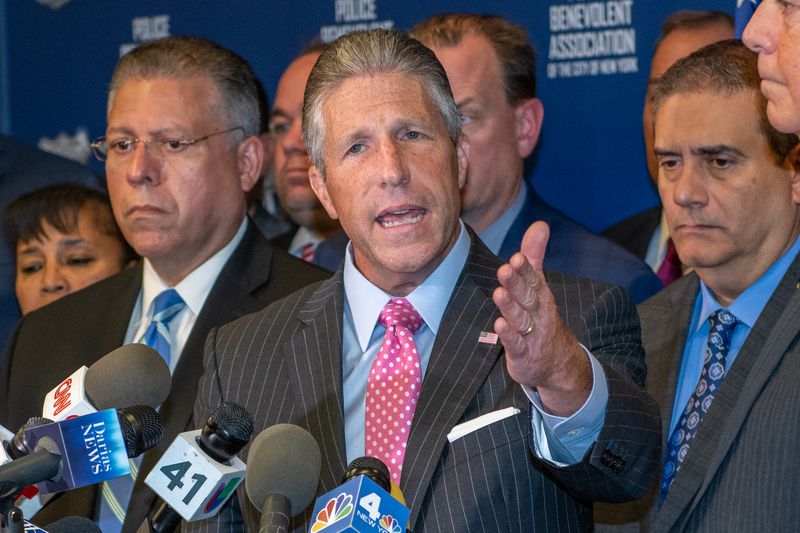 “We have a public safety emergency in New York City," Lynch said.

"The double-digit increases in shootings, robberies, burglary and thefts aren’t the product of any single law or policy. They are the result of failed leadership and a political culture that denigrates and devalues the work police officers do.”

De Blasio, speaking at a news conference in Harlem, slapped back by saying Lynch’s comments were politically motivated.

He said the union is “wishing for New York City to fail — and that’s for their own political reasons.”

Both de Blasio and Police Commissioner Dermot Shea put some blame for the crime boost on a new state law that eliminates bail for more than 450 crimes, including more than 250 felonies. Shea has also raised concerns about judges not having discretion to keep behind bars those with a history of violent behavior.

The reforms are a problem, de Blasio said — but he insisted the NYPD is up to the challenge.

Lynch, however, said the crime jump is not just about bail reform, but also the result of the “lack of support for law enforcement” by the mayor and other elected officials.

"And these terrible statistics show that the criminals of New York have heard that message, loud and clear,” he said.

Asked later about protests Friday by activists who vandalized several subway stations as they called for free transit fares and fewer cops on the system, both de Blasio and Shea sharply condemned those who broke the law.

“Spewing vile at police does not help any cause,” de Blasio said.