New York City's private businesses will no longer have to require their in-person employees to be vaccinated beginning on Nov. 1, Mayor Eric Adams announced on Tuesday, marking an end to one of the strictest COVID-19 mandates in the country.

But during the same announcement at City Hall, Adams said the city would continue its vaccine requirement for municipal workers, which began under the de Blasio administration last year. As of July, more than 1,750 municipal employees had reportedly been fired for refusing to get the shots, according to the New York Post.

“Vaccinated workers have carried out their jobs and they stepped up when the city needed them the most,” Adams said. “We think it's imperative to send the right message and lead by example.”

In another shift, the mayor also said student athletes would no longer have to show proof of vaccination to participate in organized sports. That policy takes effect immediately. Despite recent updates to its guidance, the Centers for Disease Control and Prevention still considers contact sports to carry a high risk of “getting and spreading the virus.”

The moves reflect a broader effort by state and federal officials to begin easing some of the restrictions put in place during the height of the pandemic. Earlier this month, Gov. Kathy Hochul said public transit riders, including those on subways and buses, no longer had to wear masks. She also allowed her pandemic emergency powers to expire.

On Monday, President Joe Biden went as far as to declare the pandemic “over.”

Citywide, 80% of residents are considered fully vaccinated, according to the city’s health department, while only 40% are boosted. Dr. Ashwin Vasan, the city's health commissioner, emphasized the need for people to seek out the new updated boosters. 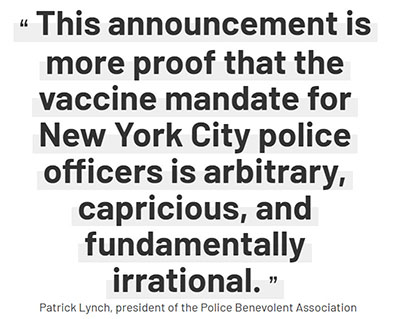 “One of the biggest critiques of the original formulation of the vaccine is that while it continued to protect against severe illness and death, over time its effectiveness at blunting transmission lessened,” Vasan said. “That’s why I’m so excited about this new bivalent booster. Because if adopted widely, not only should it continue to protect against severe illness, it should actually start to blunt transmission.”

A high plateau of COVID cases this summer in New York City has steadily dropped over recent weeks, from a seven-day average of more than 4,800 cases to under 2,000.

But the latest data from the CDC and New York State Department of Health shows case rates are starting to rise again. As of late last week, about 750 city residents were hospitalized with the virus, and hospitalizations were beginning to rise in colder parts of the state.

Although Tuesday’s news was welcomed by the business community, the lifting of the vaccine mandate on private employees will result in few practical changes in the city’s approach toward enforcement. In June, the mayor’s office acknowledged that city officials had not been checking to see if private employers were following the requirement as former Mayor Bill de Blasio had pledged to do.

Asked Tuesday by a reporter if the city had been tracking how many private employees had been vaccinated, Adams responded that the city had no such data.

Rather, the decision’s immediate impact was felt in the response from municipal unions, who argued that the city is unfairly imposing a double standard. As of late August, the city government continues to face new lawsuits from municipal employees over the vaccine mandate.

Harry Nespoli, the chairman of the Municipal Labor Committee, which represents a group of city worker unions, protested the mayor’s decision in a letter to his administration on Monday. He called the policy an “overreach” by city government and pointed out Adams’ decision earlier in the year to carve out a vaccine exemption for professional athletes.

“If New York City is moving past the COVID-19 pandemic era, it must do so for all of its workers,” Nespoli wrote.

“This announcement is more proof that the vaccine mandate for New York City police officers is arbitrary, capricious, and fundamentally irrational,” he said in a statement.

Lynch added that the police union would now seek to settle its pending lawsuits and obtain back pay for members who were fired.

The city’s firefighters unions said that about 200 FDNY employees are facing termination for refusing to get vaccinated.

The United Federation of Teachers, the city’s teachers union, notably did not address the vaccine mandate.

“Vaccination has kept millions of New Yorkers safe and healthy throughout the pandemic, and we encourage every eligible New Yorker to get vaccinated and boosted,” said Alison Gendar, a spokesperson, in a statement.

Following what some criticized as a slow rollout, the city plans to launch a booster shot campaign next week across various media outlets, Adams said.

To kick off that effort, Adams received the latest bivalent booster shot in front of reporters.

Asked how the shot felt, Adams replied, “You’ve done it? I thought it would be something more dramatic.”