Only two people have been busted in connection with the chaotic, cop-hating protest that rocked Downtown Brooklyn — as New York’s Finest kept a low profile Saturday elsewhere in the borough where an angry mob treated them like trash.

Despite official vows of “additional resources” in the wake of the disgraceful treatment cops and their cruisers received in Brownsville Halloween night, uniformed officers near the dumping ground — East 95th Street and Clarkson Avenue — were hard to spot.

“Cops are hesitant — they’re second guessing themselves,” Sergeants Benevolent Association president Ed Mullins told The Post. “These anti-police protests are growing,” he said, but “cops don’t want to engage. Because they fear that if it goes bad, the NYPD is not going to back them.”

The raucous crowd threw trash, boxes and eggs at a patrol car — and then taunted arriving cops, “Trick or treat, motherf—rs!”

No arrests had been made in connection with that vandalism by evening. 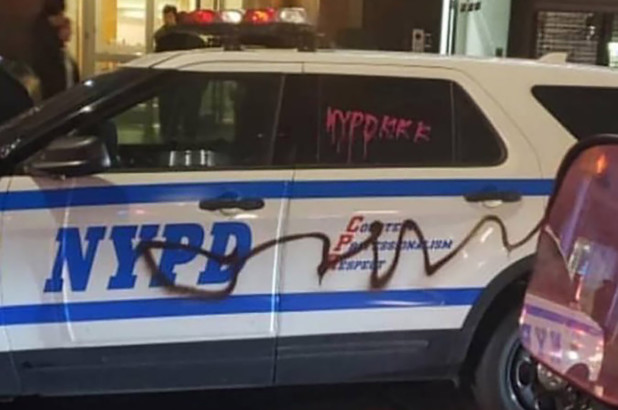 Official NYPD vehicle shown with graffiti alongside driver side doors.

Hundreds marched through Downtown Brooklyn to protest what they described as continuous brutality by the NYPD. (Michael Nigro/Sipa USA)

“What are they mad now? It’s not like somebody slashed their tires,” shrugged one passerby, who gave his name as “Jeffrey W.”

“Just move the boxes and leave, it’s not that serious.”

The holiday hell-raising, which led one police source to rage, “the inmates are running the asylum,” was followed Friday night by a thousand cop-scorning protesters rampaging through Downtown Brooklyn.

“Punch that cop!” read one sign, an apparent reference to a recent, controversial, caught-on-video melee in which a cop was seen punching a 15-year-old boy at the Jay Street-Metro Tech station.

Cop-cursing lawbreakers jumped en masse over turnstyles at the Hoyt-Schemerhorn station in what some called a protest of a planned NYPD crackdown on fare evasion.

Protesters drew anti-cop graffiti on the station walls, including a scrawled image of a pig with “X’s” for eyes, while above ground, more police cars were defaced with graffiti reading “F–k NYPD.”

Just one alleged graffitist, Sarah Autz, 25, — who allegedly scrawled “PIG” on a cop car, was arrested; she was awaiting arraignment Saturday night.

A second protester, a 22-year-old man, was issued a summons for allegedly spitting at officers, police said.

“It doesn’t surprise me that some of the community [members] have some hatred towards us,” Lou Turco, president of the Lieutenant Benevolent Association told The Post.

Turco, Mullins and Police Benevolent Association President Pat Lynch were unanimous in blaming the surge of hate in large part Mayor de Blasio and other politicians and community leaders — for failing to condemn the anti-cop mobs.

“These are the people who are driving public safety policy in our city. They are who our elected officials are pandering to at the expense of safe streets. Their goal isn’t ‘justice.’ They want violence against police officers & the end of all law enforcement. It’s time for our elected officials to support our police the way honest working people from the neighborhoods do,” Lynch said.

“Stop pandering to the criminal element.”

“They’re being silent on this,” Turco agreed. “I don’t hear nothing,” he said of civic and community leaders.

Mullins and Lynch additionally blamed the silence of NYPD brass.

Meanwhile, cops on the street are dreading what will come next if the anger continues to escalate unstopped.

The fear, Mullins said, is that cops are going to end up injured — or worse.

“I see it coming, and we all say it. I see the violence toward police officers getting worse,” Mullins said.

“I see it getting to the point where another police officer is going to get killed, just like with Ramos and Liu — I see it coming.”

Mullins referenced a crazed cop-hater’s 2014, point-blank shootings of NYPD martyrs Wenjian Liu and Rafael Ramos as they sat side-by-side in their marked patrol car in Bedford-Stuyvesant.

Investigators attributed the Ramos and Liu shootings to the gunman’s sick quest for revenge for the death of Eric Garner and the police shooting, in Ferguson Missouri, of unarmed teenager Michael Brown.