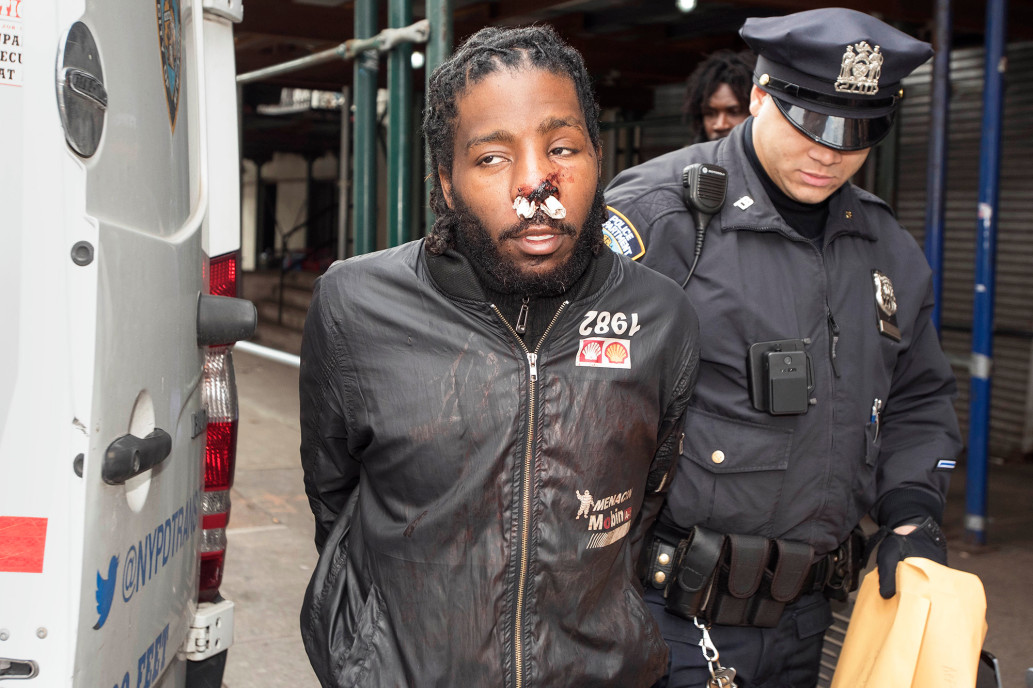 A man with a long history of run-ins with the NYPD said Wednesday that cops clubbed him “like I’m Rodney King” during a caught-on-camera arrest in Upper Manhattan.

The incident, in which another man was also struck with batons and arrested, is under investigation by the Internal Affairs Bureau — and Mayor de Blasio called the video recording “really troubling.”

Aaron Grissom, 36, told The Post a group of cops “almost killed me” on a Washington Heights street Tuesday afternoon, and left him with three broken ribs and “five staples in my head.”

“I got beat down like I’m Rodney King,” Grissom told The Post, referring to the victim of an infamous 1991 police beating in Los Angeles.
Grissom also claimed he was the victim of racial profiling by cops.

“This was on purpose. They’ve been going at me for the past two, three months … Call me bitches, n—as and everything,” he said while leaving the NYPD’s Transit District 3 headquarters in handcuffs and ankle shackles.

“Who the two black men getting locked up? For standing for their rights?….My lawyer gonna get all of this.”

Grissom didn’t have any visible marks on him, but pal Sydney Williams, 37, who was also arrested, had a large scab on his nose and tissues shoved up his nostrils as he headed for arraignment.

A six-minute cellphone video shot by a passerby shows two unidentified cops squaring off with Grissom and Williams in the intersection of Broadway and West 169th Street around 2:30 p.m. Tuesday.

Someone says, “Back up!” and a cop with a shaved head snaps open a collapsible baton, then swings it at Williams, who blocks the strike with his arm.

Another cop, wearing a hat, then reaches over from the left and smacks Williams in the face with a baton, prompting Grissom to advance and chase that cop west on 169th Street.

When the camera pans left, Grissom and the cop are wrestling in the street next to a parked, black SUV.

The cop with the shaved head then runs over and begins swinging his baton as two other men in civilian clothing join the melee.

The two uniformed cops swing their batons at Grissom least 16 times, including at least three times while he’s on the ground.

Another man, his right hand near his hip, also rushes across 169th Street and apparently tells Williams, who is off-camera, “Get on the ground! Get on the f–king ground!”

The NYPD identified the three men in civilian clothing as two detectives and an off-duty cop.

A law-enforcement source said the cop who struck Williams in the face appeared to have violated NYPD guidelines, noting that “headshots are totally wrong.”

“They teach you … The head is red zone. You don’t hit anyone in the red zone. Waist, knees, thighs. Head? No,” the source said.

“You could have killed him. The cop could get arrested for this. If they don’t find video of that guy swinging at the cop, he should be done. He was wrong.”

De Blasio said that “very preliminary” information suggested “that the individuals involved were creating a real problem for neighbors” and may have resisted arrest.

“But that being said, the images I saw in that video were really troubling. And we need to know a lot more,” Hizzoner said during an unrelated news conference at City Hall.

“If people are on the ground and yet there is still physical action being taken, that concerns me. So I want to get some answers and I want to quickly hear from the NYPD on the investigation.”

The man who shot the video said it doesn’t show how Grissom and Williams were the aggressors and the cops were “just defending themselves.”

Neighborhood resident Michael Gonzalez, 32, said he was walking with his aunt when they saw the incident unfold.

“I noticed this cop approach two guys on the corner. He politely approached them and said, ‘You guys can’t stand on this corner.’ He told them, ‘Come on, guys, move on.’”

“They gave the cops attitude. They started cursing, ‘F–k you, get the f–k out of here.’ They actually followed [the cop] and the two individuals actually lunged at one of the officers.”

“I pulled out my camera and you start seeing the cops being aggressive, when they were just defending themselves,” added Gonzalez, a social worker.

The video, a clip of which Gonzalez posted on his Instagram account, also features narration by his aunt, who uses Dominican slang to describe the incident to passers-by.

“They flew at the police, those two troublemakers,” she says in Spanish.

“[The cops] were telling them to move from there and they didn’t want to, and in between the both of them, they flew at them. Here in the middle of the street.”

The aunt also says that “it’s good that [the cops] did that.”

“They told them to get out of here. … Now beaten and off to jail,” she says.

The NYPD said the incident began when the uniformed cops responded to complaints that Grissom and Williams were smoking and blocking a stairwell to the 168th Street station on the A/C/1. 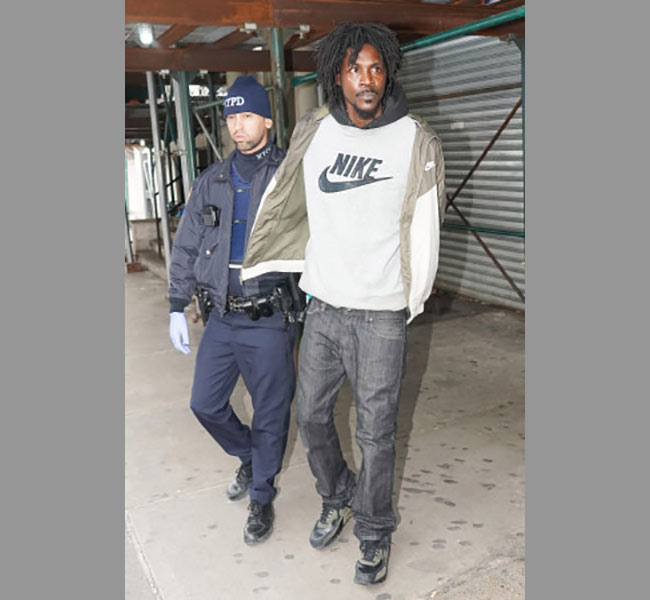 One of the cops said Grissom tried to punch him, and when his partner went to intervene, Williams attacked the second cop, according to the NYPD.

Grissom and Williams were both charged with felony assault on a police officer, resisting arrest, menacing, disorderly conduct and loitering.

On Dec. 5, both men were arrested inside the subway station when Grissom was accused of taking a swing at a cop and Williams approached another cop while swinging a wooden bat.

Grissom was allegedly carrying 17 zipper bags of synthetic marijuana, also known as “K2,” and Williams allegedly had 14 bags of the drug, and court papers said they made threats including, “We are going to get you. You’re going to get what’s coming to you.”

They were each released without bail, according to the Manhattan DA’s Office.

Patrolmen’s Benevolent Association President Patrick Lynch said, “What the video doesn’t show is that these perps — one of whom has been previously arrested for assaulting a police officer — threw a haymaker at the cops once they got above ground, necessitating the use of force to bring them into custody.”

The PBA also released a Facebook video that shows Williams boasting on camera about how cops “don’t like me, but they can’t touch me.”

“Every case I got, I beat. Who you know snuff cops and come home the next day? I do this,” he says.”

Williams also warns, “Keep f–king with me police, I’m gonna show you what it is.”

“These hands, these hands work,” he says while shaking a fist at the camera.

The video was recorded in August by Grissom, who also posted it on Facebook, according to the PBA.

Williams’ last known address is an apartment in Brooklyn where the landlord’s daughter, Shantelle Mitchell, 26, called him a “loose cannon” and said that her mom had “asked him to move out.”

“The cops came a bunch of times. They’d come when he’d get into fights with his baby’s mother. He got arrested three times that I know,” she said.

Grissom lives at the Jerome Avenue Men’s Shelter in The Bronx, which provides housing for mentally ill drug abusers and where residents said he’s known as “Dread” because of his hairstyle.