PBA is in arbitration with the city over new labor agreement 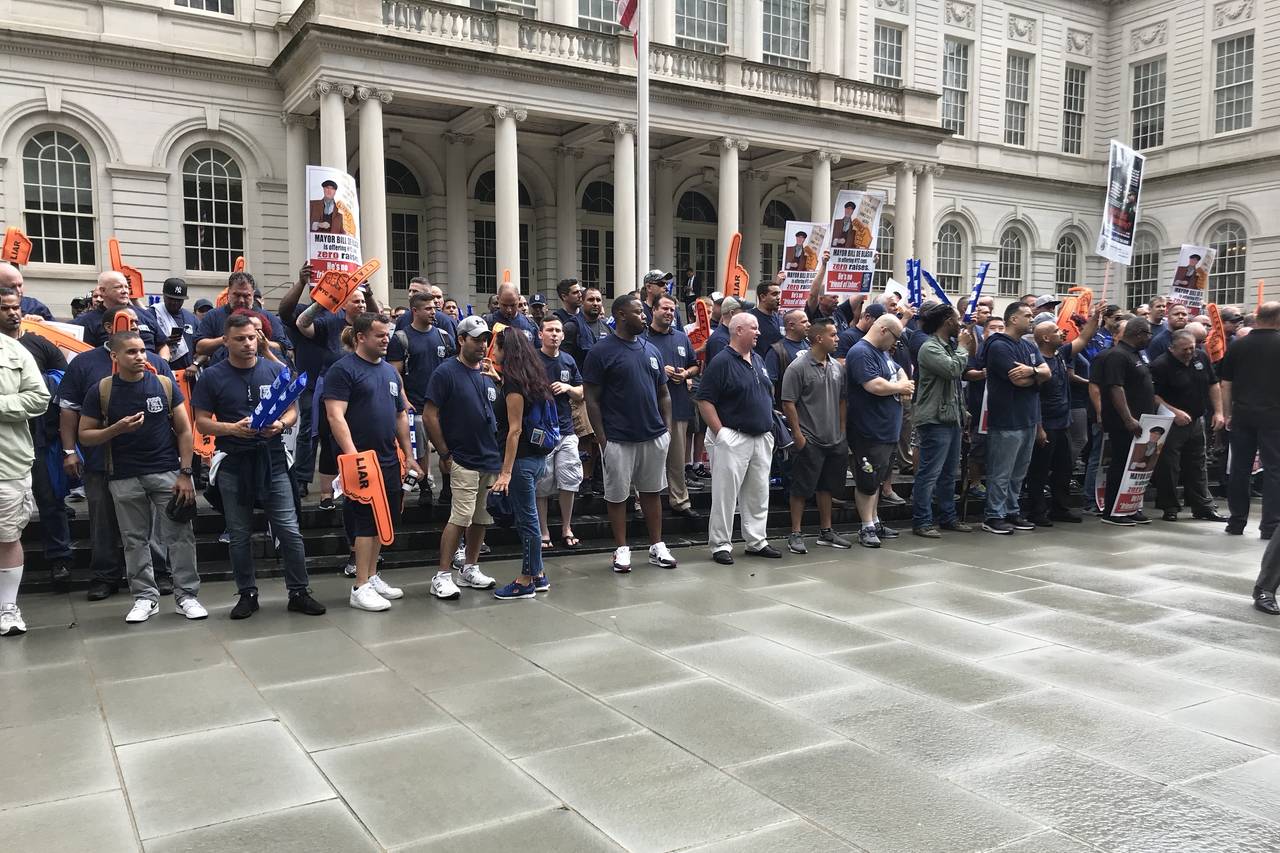 Members of the Patrolmen's Benevolent Association rally for a contract on the steps of New York City Hall on Wednesday. PHOTO: KATIE HONAN/THE WALL STREET JOURNAL

Scores of New York City police officers rallied on the steps of City Hall on Wednesday, holding up signs and orange foam fingers that said “LIAR,” to mark a year since they’ve been working without a contract.

The rally, organized by the Patrolmen’s Benevolent Association, targeted Mayor Bill de Blasio, a Democrat and frequent foe of the union, which represents 24,000 current police officers. Their last contract expired July 31, 2017, and the PBA is currently in arbitration with the city over a new labor agreement.

The demonstration outside City Hall was the union’s latest effort to draw attention to the expired contract. Labor leaders have also organized protests outside Mr. de Blasio’s gym and favorite bakery in Park Slope and at Gracie Mansion. A truck parked outside City Hall with a photo of the mayor in bed urged him to “wake up” and “do your job” to settle the contract. The vehicle had also circled around a Manhattan courthouse where the mayor had jury duty on Wednesday.

The PBA also planned to send a group of police officers to New Orleans this weekend, where the mayor plans to attend a conference for progressive leaders and activists, a union official said.

Pat Lynch, the union’s president, blasted the mayor’s travel and urged a contract—and higher raises—for officers. The starting salary for police officers is $42,500 for the first year and a half on the job, which the PBA has said for years trails behind the starting salaries for officers in other cities.“While he’s booking a flight to New Orleans, we’re out doing the job we’re paid to do,” Mr. Lynch said at the rally. “Do your job and stop the stalling tactics on contract.”

A spokesman for the mayor’s office, Raul Contreras, said the PBA sought arbitration instead of bargaining with the city, and that the city would work to ratify a fair contract for officers.

“We’ve been working in good faith with the PBA to come to an agreement that is fair to police officers and taxpayers, as we did last year when we reached the second agreement between the City and PBA since 1995,” the spokesman said.

The PBA went through a similar arbitration in 2015, later agreeing to a five-year retroactive contract in 2017. That contract included nearly 12% in pay increases and covered 2012 through July 31 of last year.

Part of that deal included a lower starting pay for new officers, which was voted in by current PBA members.