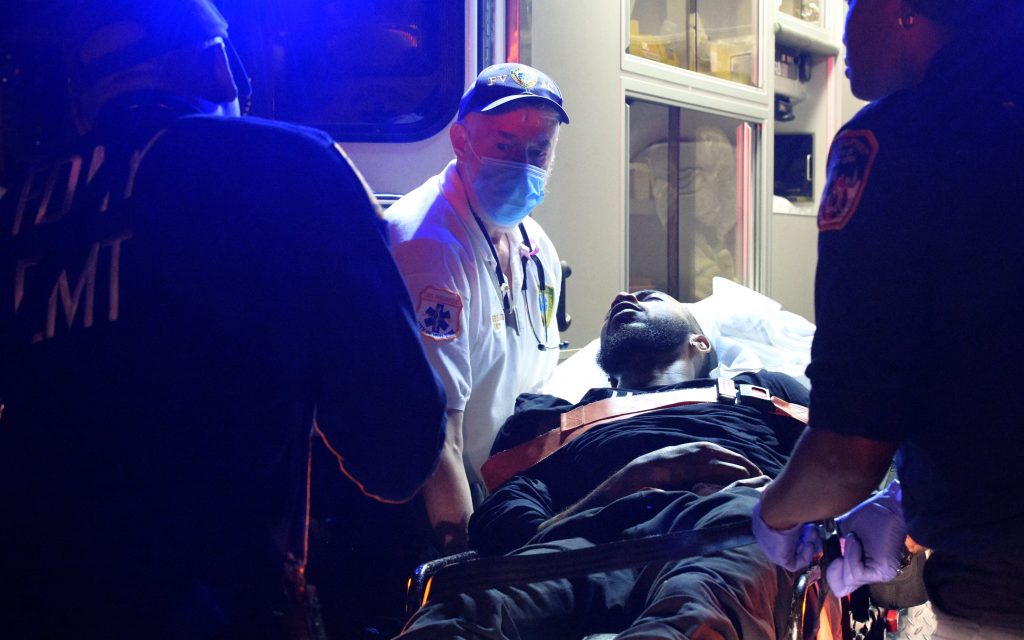 A man was shot in the arm and stomach at a high school graduation party after the gunman crashed the bash Tuesday night. (All photos on this page by Todd Maisel)

As the City Council and the mayor work on cutting part of the NYPD’s $6 billion budget, police officials and officers fear the potential comebacks come at the worst possible time — as shootings have dramatically increased throughout June. 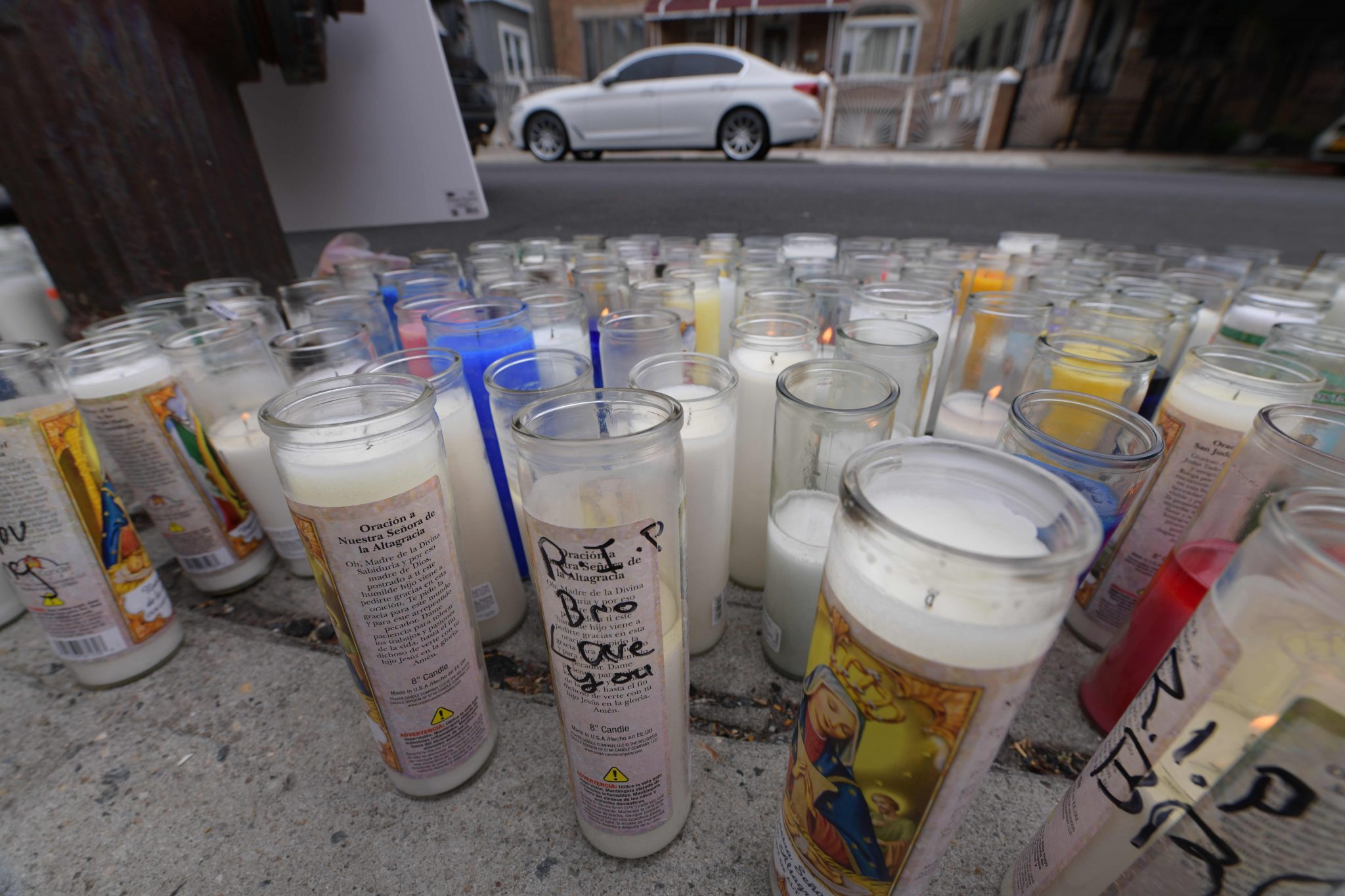 A memorial was set up for DJ Trouble, shot to death on recently on East 49th Street in East Flatbush.

Despite the rise in violent crime, Mayor Bill de Blasio said he supports a billion-dollar “defunding” of the NYPD budget. The mayor would not say if the cut is for a single fiscal year or if it would resemble the proposed cuts made by Comptroller Scott Stringer that would reduce the NYPD budget over four years, allowing for a phased reduction in manpower.

The mayor’s office would not specify whether the cuts were for FY2021 or spread out further, saying they will address it after the budget is passed.

The NYPD currently has more than 36,000 uniformed and civilian employees, including about 5,000 school safety officers and 10,000 other civilians. A billion-dollar cut, according to some law enforcement experts, would result in a dramatic cut in manpower, response times, and investigative abilities.

The average base pay for officers was nearly $69,000, but with overtime and additional pay, they could take home more than $90,000, The New York Times reported. For some higher ranks, total pay reached more than $200,000. 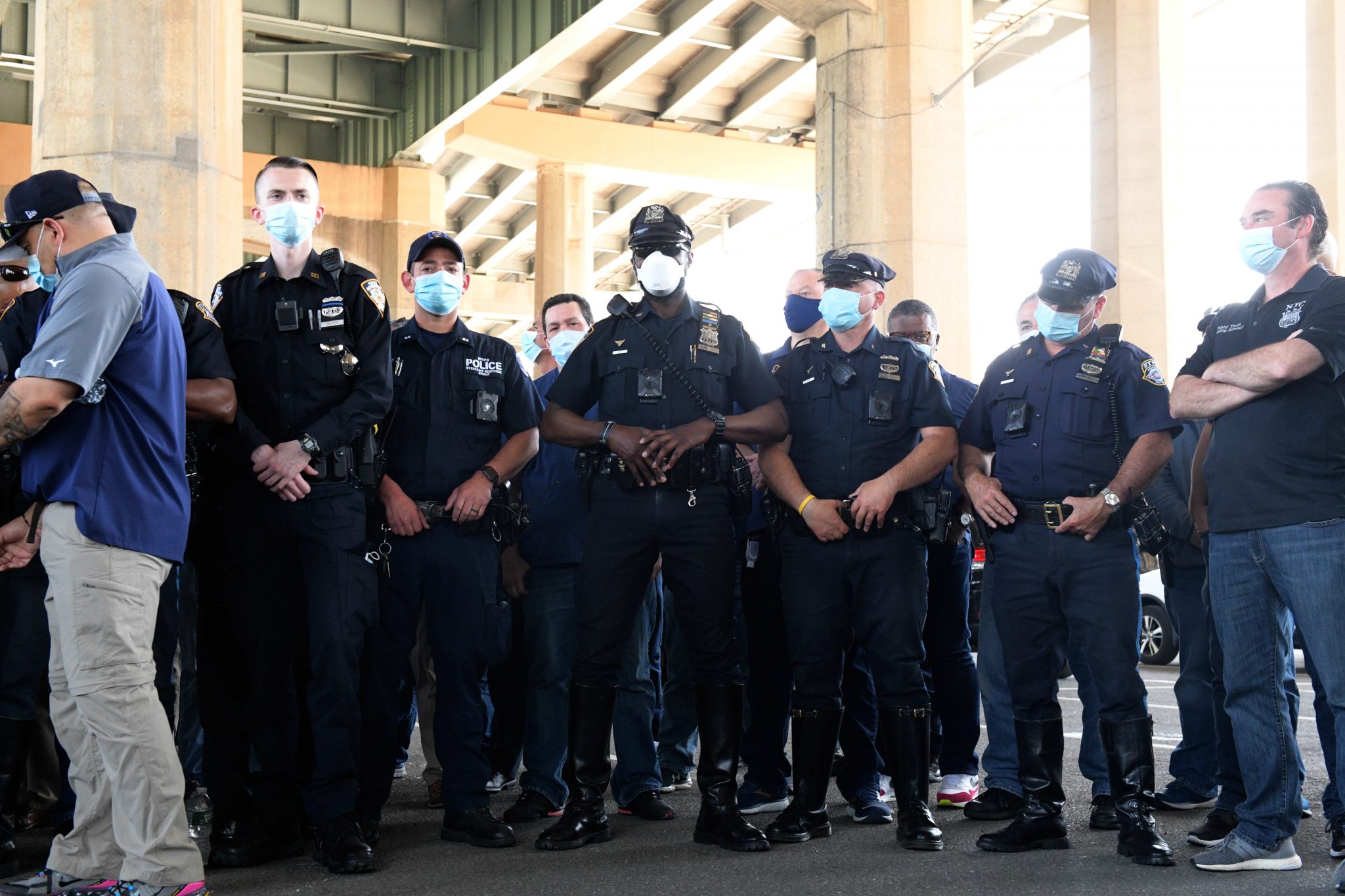 Police unions, led by the PBA, blasted the state legislature for not including them in negotiations. There may be far fewer officers soon.

Sources who spoke with amNewYork Metro about this story — including present and retired NYPD officials — believe that the department will have to be reduced by thousands of officers, some by attrition (850 have reportedly put in retirement papers alone after the worst of the protests) and some will be offered buy-outs that will more than likely increase the number of retirements.

In addition, it is expected that the school safety officers will be transferred from the NYPD to another city agency which will end direct interaction with those officers with law enforcement. The mayor had taken a position against eliminating those officers who assure the integrity of those coming in and out of the buildings.

Moving the school safety agents to another city department means an indirect cut of the NYPD budget without losing any school security officers.

However, de Blasio said in his briefing Monday morning that he was originally against the size of the budget cut, but has since found ways to make it work.

“There’s not a lot of detail, but we have found a plan that will keep people safe and achieve a billion in savings to youth programs and communities in most need,” de Blasio said. “At the same time, we want to ensure patrol strength and have school safety do its job. Yes, there is an uptick in shootings and we must be able to work on that. Reform must be done the right way.”

Chief of Department Terrence Monahan said in an NY1 interview that the protests and proposed budget cuts leave officers in a quandary.

“Police officers are now meeting angry crowds tossing bottles at police vehicles,” Monahan said. “Sunday morning, we had officers respond to shots fired, 132nd and Adam Clayton Powell Jr. Boulevard and they were met by bottles. We had 24 hours of violence, and it is up while other crimes are down. But now, we have the highest number of shootings in two decades.” 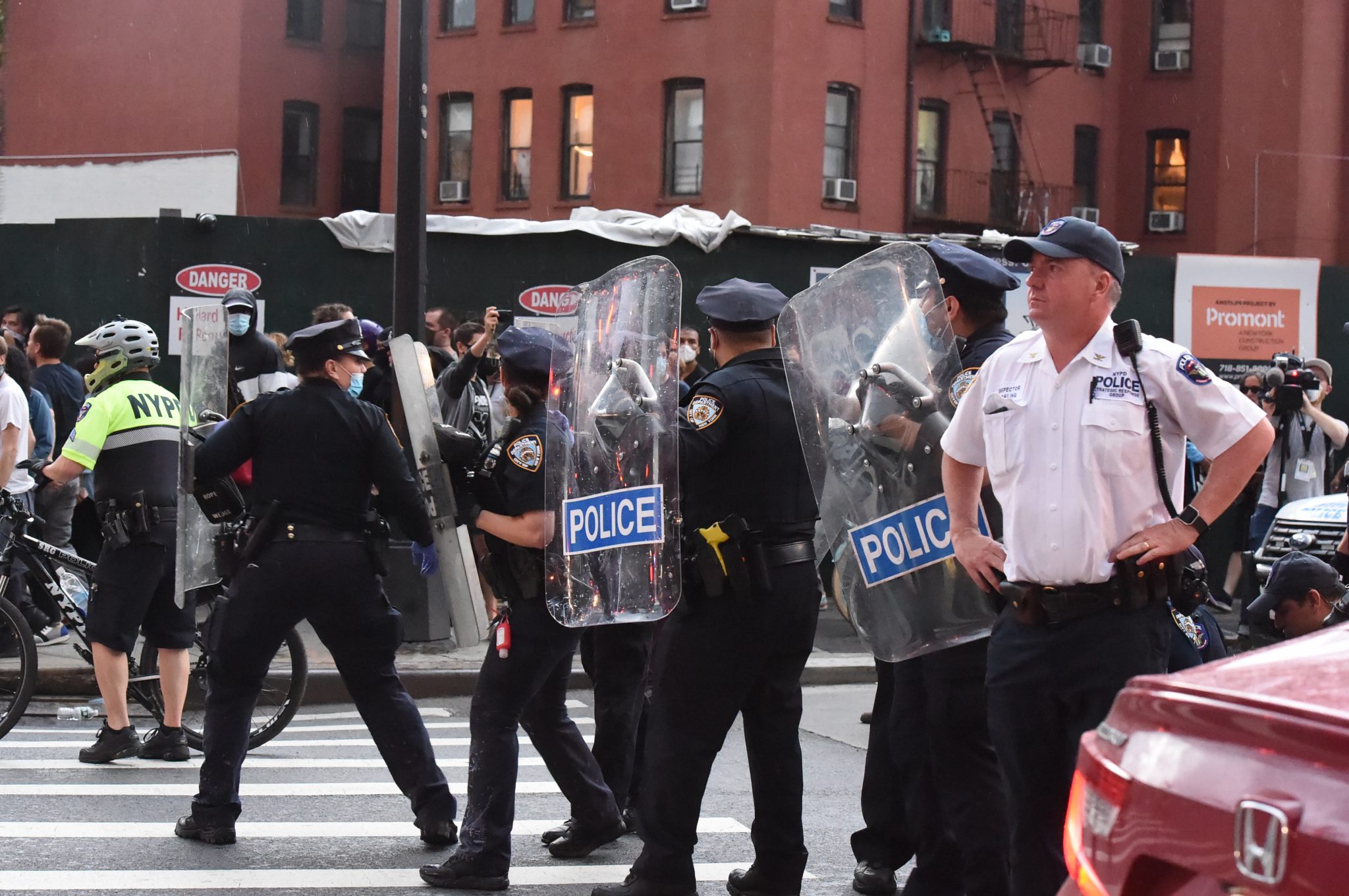 Thousands of protestors massed at the Barclays Center where they threw bottles and debris, and cops fought back with night sticks, pepper spray and arrests on May 29.

Monahan said 2020 has been a perfect storm for crime increases, citing the COVID-19 pandemic that racked the NYPD and shut most of the city down, the early release of prisoners from Rikers Island due to bail reform, and “right into the George Floyd protests – the animosity unbelievable.”

Monahan added that officers are “confused about how to keep the city safe.”

“Look out there right now, it’s not a good sign. We need clarity from the people we serve,” Monahan said.

One long time veteran officer who spoke to amNewYork Metro said he believes the city “will be like the 60s and 70s when people had to protect their own neighborhoods.”

He added, “People want to be politically correct, but when someone becomes a victim of a serious crime, then the public will realize. In the 70s, they didn’t want them either, but then in late 70s, people were screaming they need police.” 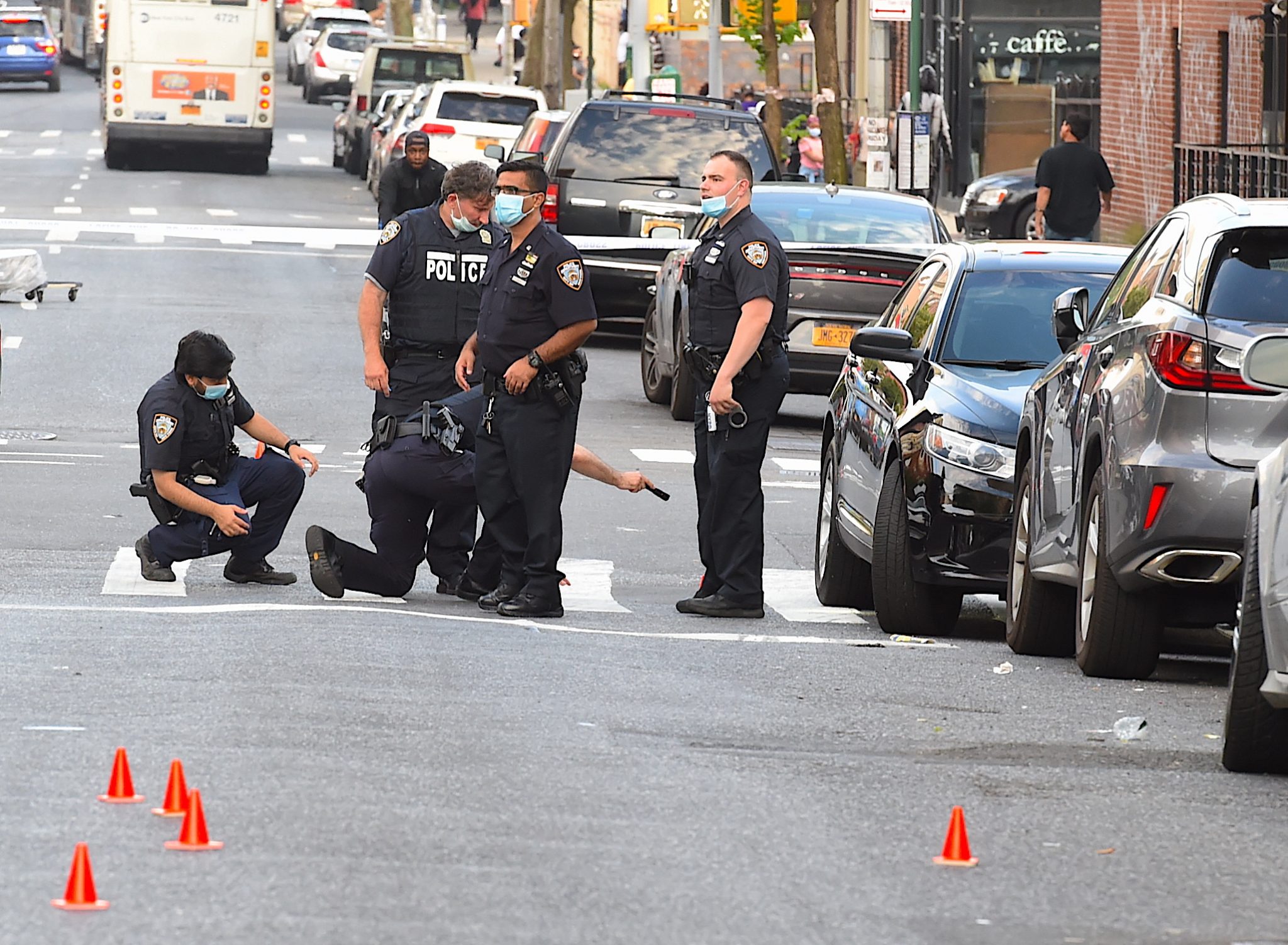 Two people engaged in a gun battle on a Brooklyn street, with one man being shot on June 10.

At a recent shooting in Bed-Stuy, where two men were engaged in a gun battle, residents didn’t seem to care that there was a shooting. One cop commented, “Wait for the summer see what happens. They don’t seem to care now, but just wait.”

Pat Lynch, president of the Police Benevolent Association, criticized the mayor and council as making the city more dangerous.

“Mayor de Blasio’s message to New Yorkers today was clear: you will have fewer cops on your streets,” Lynch said. “Shootings more than doubled again last week. Even right now, the NYPD doesn’t have enough manpower to shift cops to one neighborhood without making another neighborhood less safe. We will say it again: the Mayor and the City Council have surrendered the city to lawlessness. Things won’t improve until New Yorkers hold them responsible.” 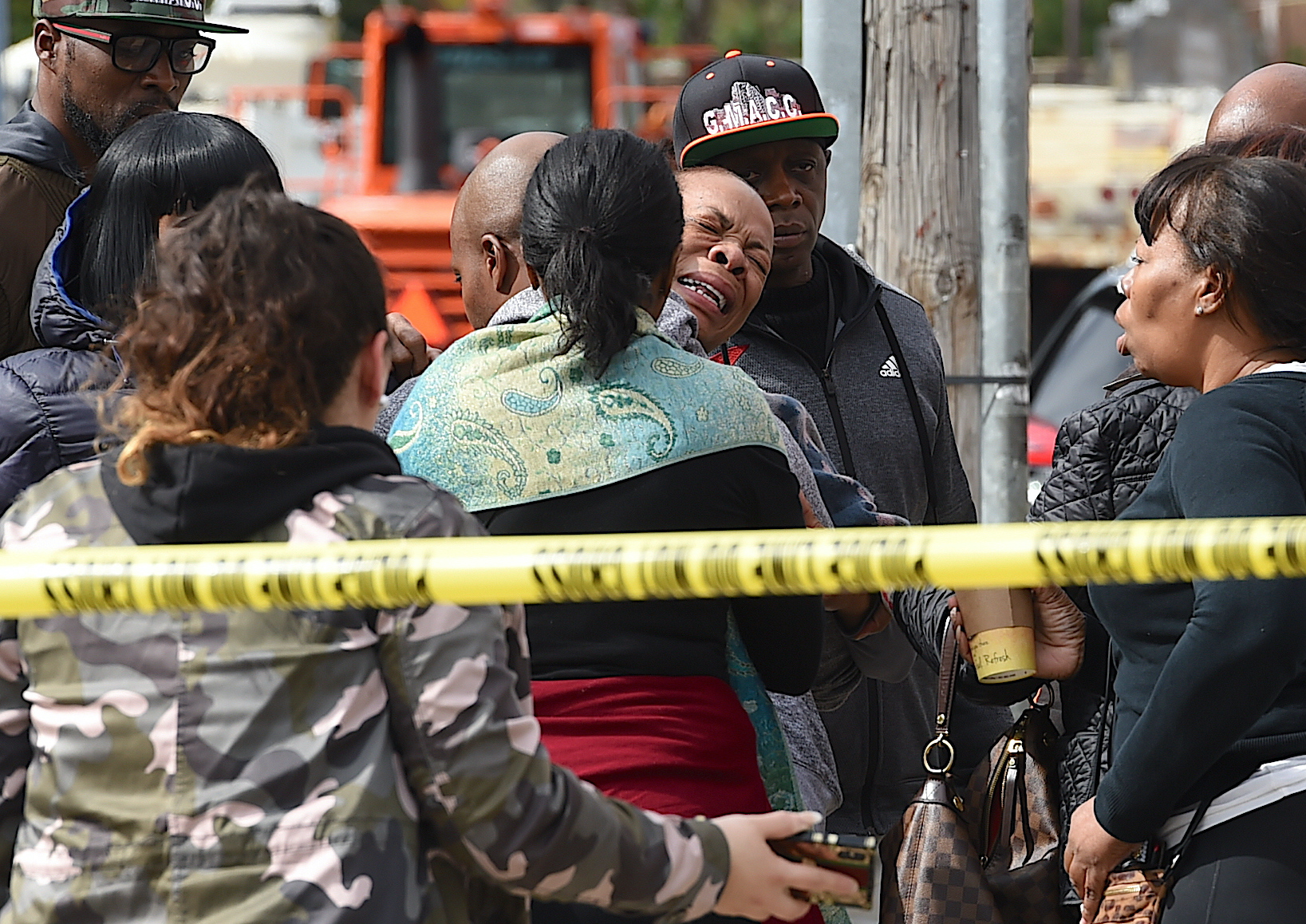 Four people were killed after a social club shooting where gambling was ongoing into the early morning at 64 Utica Avenue in Crown Heights, Brooklyn this morning.