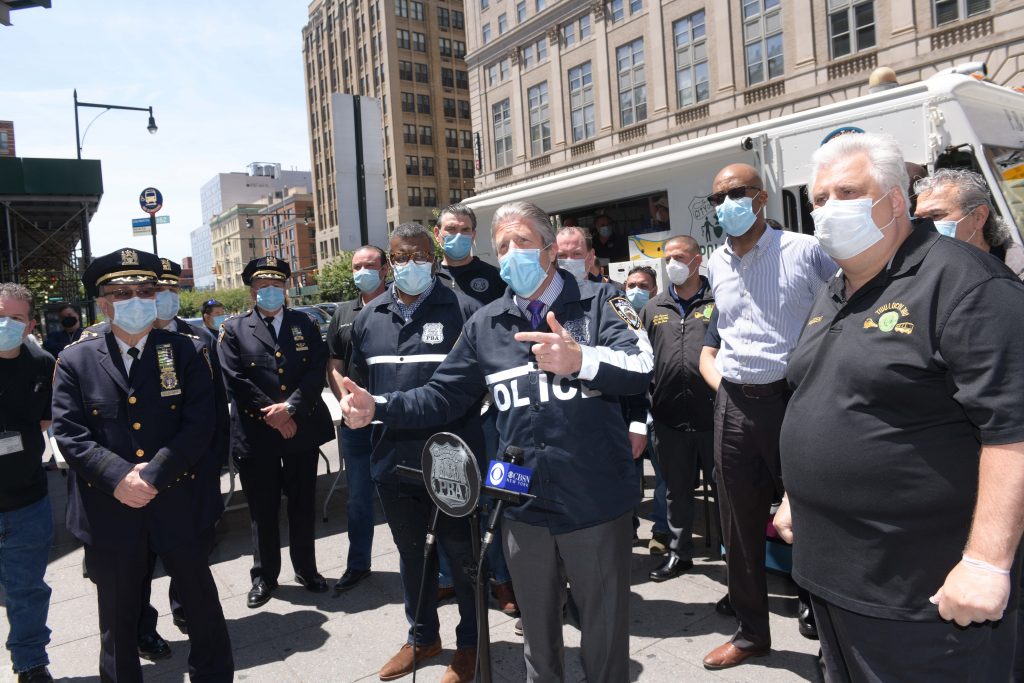 With applause and sirens blaring on their police vehicles, police officers assigned to the NYPD Transit Bureau and their union showed their appreciation to the front-line MTA transit workers by delivering a truckload of freshly made hero sandwiches and other food to Brooklyn Transit headquarters.

The police officers, led by their Police Benevolent Association President Patrick Lynch, showed solidarity with their union kin from the Transport Workers Union, led by their president Tony Utano. Both unions were hit hard by COVID-19, the TWU losing 70 members to the virus. At one point, nearly 20 percent of the NYPD was also out sick, most laid up with COVID-19 – the department losing 43 uniform and non uniform members.

Also joining them was Transit Police Chief Edward Dellatore who also contracted the virus and has fully recovered.

MTA employees are treated to lunch by cops. (Photo by Todd Maisel)

“The transit system is the beating heart of New York City, and transit workers and police officers have worked together to keep that heart pumping through every disaster and crisis,” Lynch told the crowd from both unions. “Today, we’re sending a message to all New Yorkers that our city will survive and thrive again because cops and transit workers are united on the front lines. Our transit sisters and brothers don’t just deserve protection and respect – they deserved to be recognized as the heroes they are.”

TWU President Utano was grateful for the show of solidarity with his members, who are seeking hazard pay for their work maintaining the subway and bus services during the crisis. 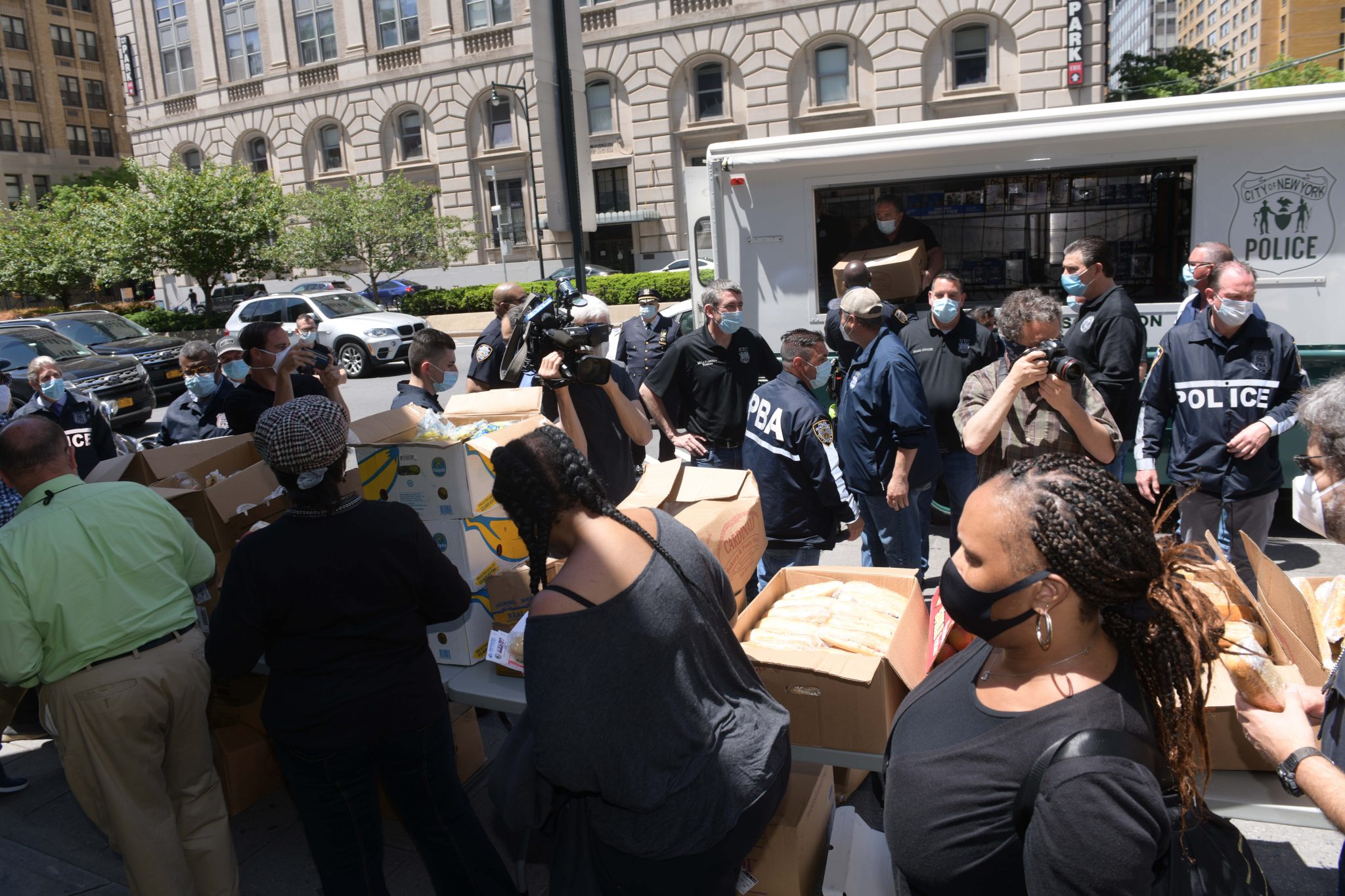 MTA employees are treated to lunch outside MTA headquarters in Brooklyn. (Photo by Todd Maisel)

“There would be no fight against COVID-19 without transit workers providing bus and subway service so our essential workers could get to their jobs at hospitals, nursing homes, supermarkets and many other locations,” Utano said. “But we haven’t been out there alone. Just like us, police officers represented by the Police Benevolent Association, have been in the streets and in the subway. Staying home just wasn’t an option. Just like us, the police have an employer that failed to provide them with adequate PPE in the early weeks of this crisis. Both transit workers and police officers have seen far too many co-workers get sick and die.  On behalf of the more than 40,000 men and women of TWU Local 100, I want to personally thank the PBA for holding this event and recognizing our members.” 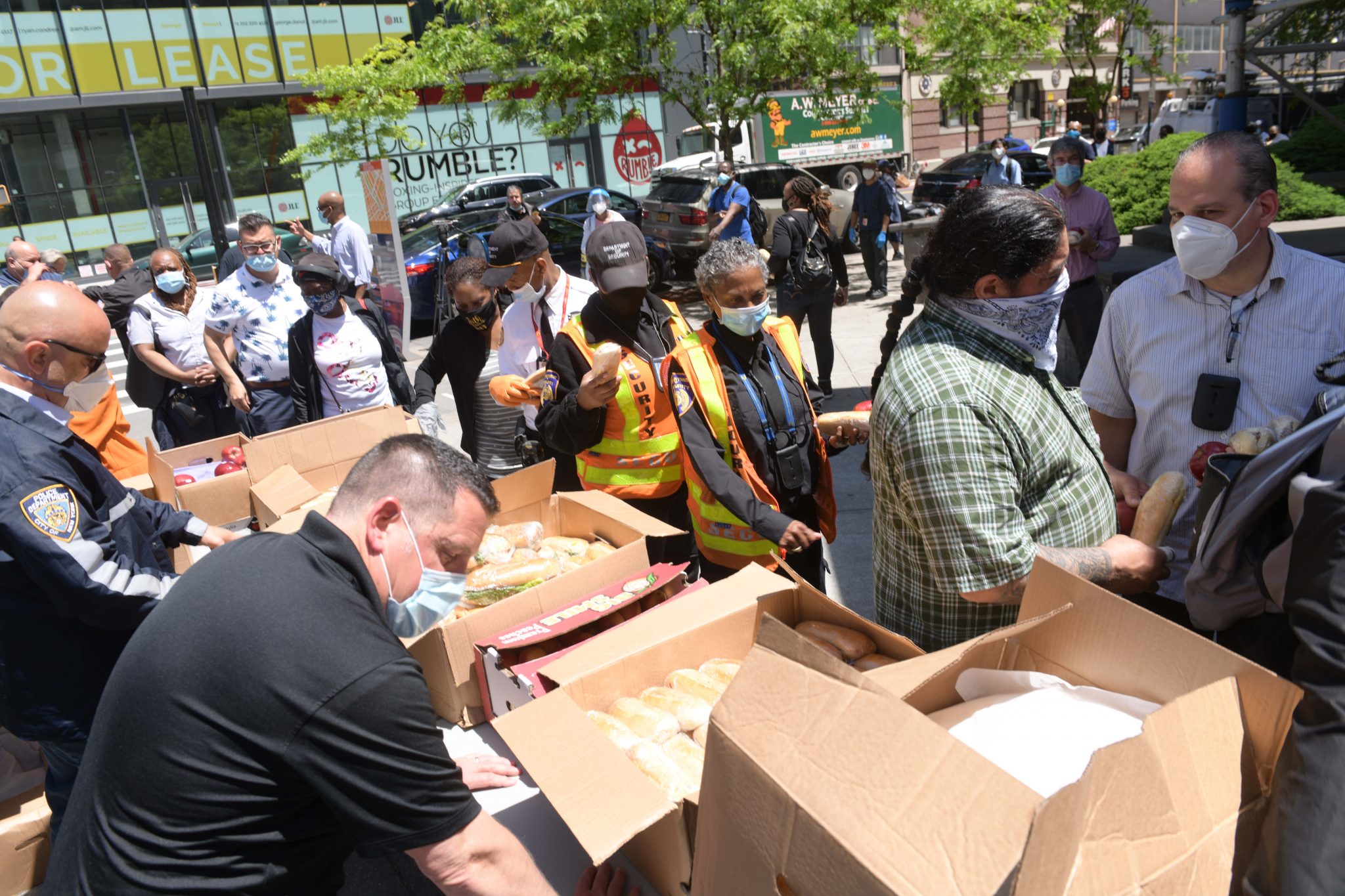 PBA members give out lunch to MTA employees. (Photo by Todd Maisel)

The long-time police supporters at Antun’s in Queens Village helped prepare nearly 1,000 sandwiches for the MTA personnel. Over the past month, the PBA has delivered nearly 5,000 sandwiches and hundreds of cases of fresh fruit and water to front line heroes across New York City.