PBA Sues CCRB For Appropriating Powers Beyond Its Mandate 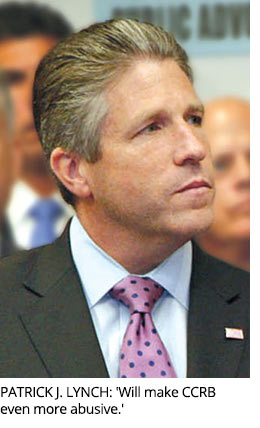 The Patrolmen’s Benevolent Association has sued the Civilian Complaint Review Board, charging that the agency made a “bold-faced power grab” by declaring it had powers “that far exceed those established by the City Charter.”

“The CCRB has always been infected with an anti-police bias, and has never lived up to its responsibility under the City Charter to conduct ‘complete, thorough and impartial’ investigations of civilian complaints ‘in a manner in which the public and Police Department have confidence.’ But these recent rule changes are a bold-faced power grab to create a CCRB regime that is more abusive to police officers than ever before,” said PBA President Patrick J. Lynch.

“Through its internal rule-making and resolutions, the CCRB has illegally vested itself with the authority to initiate investigations when no complaint has been made by a member of the public or to pursue complaints when the statute of limitations has expired, just to name two examples that clearly exceed their Charter powers.

“This is not just a case of mission-creep, it is a flat-out violation of the City Charter, existing laws and of legislative mandates.”

The CCRB declined to comment on the suit. The Law Department said it was still reviewing the papers.

The police unions have been hostile to the CCRB since it was established in 1993 and charged with investigating complaints against officers of excessive or unnecessary force, abuse of authority, discourtesy or offensive language. In cases where a CCRB investigation finds a complaint is justified, the agency recommends possible discipline to the NYPD.

The unions complained that the agency’s investigators are inexperienced and take too long to close cases. Officers cannot be promoted while they have an open case. The unions are also unhappy that police officers must testify under oath but that witnesses and complainants are not required to do so.

Mr. Lynch continued, “The CCRB is an agency comprised of such anti-police personnel; they will stop at nothing, they will violate any law and they will bend any rule just to penalize police officers…The deck was already stacked before these illegal rules were adopted, and so we are asking the court to level it out.”

The suit, filed in Manhattan Supreme Court, seeks to have a judge declare the following rules invalid, as described by the PBA: