Widow of Murdered Cop Joins PBA In Decrying Parole of His Killer by Bd.

Calls It 'A Betrayal of Police Officers' 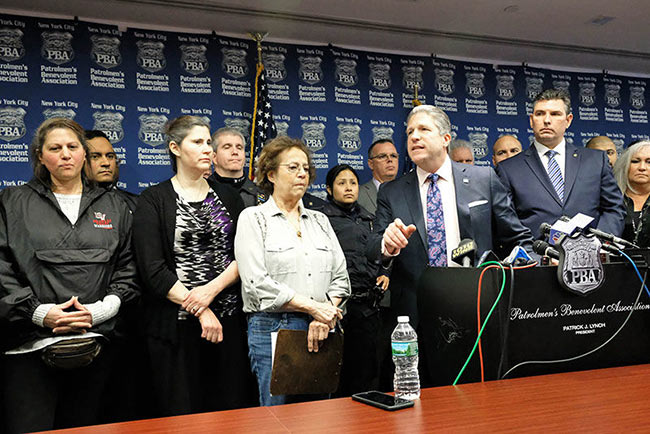 FORTY-SEVEN YEARS LATER, THE TRAGEDY RESONATES: Patrolmen’s Benevolent Association President Patrick J. Lynch, at lectern, decries the decision to parole one of the three men who gunned down Officers Joseph Piagentini and Waverly Jones in 1971. To his right is Officer Piagentini’s widow, Diane, and the Piagentinis’ two daughters, Mary, to her mother’s right, and Deborah. ‘Letting a cop-killer out of prison is a betrayal,’ Diane Piagentini said.

Her voice breaking, the widow of a police officer assassinated in 1971 blasted state parole officials March 15 for deciding to release one of the men convicted of killing him.

“We’ve been betrayed,” said Diane Piagentini, 74, whose husband, Joseph Piagentini, and his partner, Waverly Jones, were ambushed and shot to death by three members of the Black Liberation Army. “Letting a cop-killer out of prison is a betrayal to police officers, to citizens in the United States.”

One of the three shooters, Herman Bell, now 70, was granted parole last week. A second, Anthony Bottom, 66, is up for parole in June. The third, Albert Washington, died in prison.

Ms. Piagentini and her two daughters, who were 15 months and three years old when their father was killed, appeared March 15 at a press conference at the offices of the Patrolmen’s Benevolent Association.

At that event, PBA President Patrick J. Lynch called for the firing of the two Parole Commissioners on the three-member board who had voted in favor of parole, and for the state to reverse the decision.

That may not be possible. Thomas Mailey, spokesman for the state Department of Corrections and Community Supervision, said in a statement, “Under New York State law, the parole board is an independent body regarding all decisions and only the courts can overturn a decision once it has been handed down. Further, in order for board members to be removed, ‘just cause’ must be demonstrated and a hearing process must be completed.? Disagreement with the decision does not meet the standard of just cause.”

Mr. Lynch said the PBA is investigating every possible way of accomplishing its goals.

The mission of the Black Liberation Army was to overthrow the government, but it appeared to spend most of its energies committing robberies and killing cops. It has been tied to the murder of as many as 13 police officers, including five from the NYPD.

In 1971, the three killers made a 911 call reporting a phony problem at a housing project in Harlem. They opened fire when the officers left the building after checking it out. Officer Jones died immediately. Officer Piagentini was shot 22 times as he pleaded for his life.

The killers were sentenced to 25 years to life, the most-stringent term that could be imposed at the time. Since then the state has created a term of life without parole, which would avoid the parole hearings that come up every two years after the minimum sentence is served. This was Mr. Bell’s eighth bid for parole.

“The judge said that if he could he would give them the chair," Ms. Piagentini said as her daughters looked on, one wiping her eyes with a tissue. To parole them, she said, “is to pin a target on the back of every officer.”

Mr. Lynch said the PBA’s phones had been ringing off the hook with calls from cops outraged by the parole decision. Veterans and rookies both, he said, “they come up with the same word: ‘We’re sickened by this.’”

'Keep Them Behind Bars'

He said many callers put their expectations this way: “If a mope kills me, you’ll take care of my family and the mope will stay behind bars forever.”

The two Commissioners who approved parole, Otis Cruse and Carol Shapiro, “need to be canned,” he said. “They need to be gone. They’ve lost their understanding of right and wrong.”

The earliest date set for Mr. Bell’s release was April 17. He will need to arrange living, counseling and possibly work situations before he can leave prison.

Many officials criticized the parole decision.

Police Commissioner James P. O’Neill issued a statement calling the decision “indefensible. It trivializes and condones the premeditated assassinations of NYPD Officers Joseph Piagentini and Waverly Jones. It also reopens the wounds suffered not just by these heroic officers’ relatives, but by the entire law-enforcement community and all of civil society...

“We don’t have the death penalty in New York, but there has to be something more permanent than eventually getting released if you murder a police officer. Herman Bell’s victims—targeted solely for the blue uniform they wore—can never be paroled from death.”

Mayor: Should Be Life

Mayor de Blasio, asked about the decision at an unrelated event, said, “I’m very troubled by it. It should be life in prison, period.”

“By releasing Herman Bell, the Parole Board has dishonored the service and sacrifice of slain Officers Joseph Piagentini and Waverly Jones,” said State Sen. Martin Golden, a former police officer.

Mr. Cruse and Ms. Shapiro “have failed the citizens they are supposed to serve,” said State Sen. Patrick M. Gallivan, a former Sheriff of Erie County and, like Mr. Golden, a Republican.

VICTIMS OF THE BLACK LIBERATION ARMY: A poster displayed at the Patrolmen’s Benevolent Association press conference shows Officers Joseph Piagentini, left, and Waverly Jones. The two were ambushed and assassinated in 1971 by three BLA killers, one of whom was just approved for parole.

Edward D. Mullins, president of the Sergeants Benevolent Association, also issued a statement condemning the decision. "It is hard to imagine a more reprehensible crime," he said. "It was unequivocally an act of domestic terrorism...

"The Parole Board credited Mr. Bell for taking responsibility for his actions and expressing remorse, even though he only admitted to taking part in the crime in 2012. They praised him for his 'maturation' because he finally admitted that his actions were 'a terrible mistake.' There are no words to describe what a betrayal of the public trust this egregious decision is.”

The panel of three Parole Commissioners who interviewed Mr. Bell March 1 issued a decision March 14 saying the majority of the panel concurs that "your release is not incompatible with the welfare of society and further believes you can live a law-abiding life.”

The panel wrote that Mr. Bell had convictions for robbery, armed robbery, illegal possession of a non-registered weapon and the bombing of a San Francisco police station that killed Sgt. John Young. But, it added, “your records feature no indication of: a history of substance abuse, domestic violence, orders of protection, current gang affiliation nor mental abnormalities.”

“Little disagreement exists that your crime represents one of the most supreme assaults upon society, the result of which has given the family of the victims cause for life-long suffering that will not be forgotten, where total solace may never be achieved.

“Throughout the interview, the panel noted your regard for the pain and suffering you caused the family of the victims. You repeatedly expressed your regret and remorse for your crimes, and asked for forgiveness. Your admission denoted maturation and insight; ‘there was nothing political about the act, as much as I thought at the time. It was murder and horribly wrong...It was horrible, something that I did, and feel great remorse for having done it.’”

The panel did not mention testimony by the Piagentini family or the PBA, but noted that obviously Officer Jones's son had written a letter in February that “continues to express to the board his family’s forgiveness of Bell killing his father.

“The simple answer is [that paroling Mr. Bell] would bring joy and peace as we have already forgiven Herman Bell publicly,” the letter said. “On the other hand, to deny him parole again would cause us pain as we are reminded of the painful episode each time he appears before the board.”

Mr. Lynch said the panel had appeared to consider it more important how Mr. Bell lived in prison than “on how our police officers died, more important than how their families had to live with that loss."