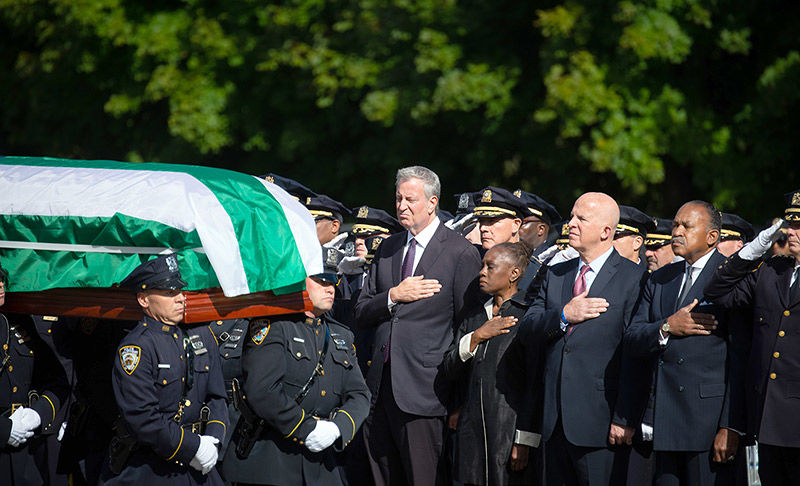 FAREWELL TO A HERO: Mayor de Blasio was among those paying tribute to Police Officer Brian Mulkeen at his funeral service in upstate Monroe Oct. 4. ‘Brian could have followed a conventional path,’ the Mayor said in his eulogy, noted that he had given up a job as a financial adviser to serve as a role model, even to a teenager he had arrested.

SAD MOMENT FROM ‘A THANKLESS JOB’: Police Commissioner James P. O’Neill hugs Brian Mulkeen after presenting him with his son Brian’s shield and promoting him posthumously to Detective First Grade. ‘It takes a tremendous amount of courage to do the work Brian and his team do every day,’ the Commissioner said, becoming particularly emotional when he ran through a list of cops recently killed in the line of duty, ‘the names I repeat to myself every day.’

Thousands of police officers gathered outside Sacred Heart Church in Monroe, N.Y. on Oct. 4 to mourn the death of Police Officer Brian Charles Mulkeen, who was killed by friendly fire five days earlier.

Officer Mulkeen, an Anti-Crime Officer, was assigned to the 47th Precinct in the Bronx and was shot twice by other cops while wrestling with a man carrying a loaded .32 caliber revolver during a confrontation outside of a Bronx housing development. He was rushed to Jacobi Medical Center but was pronounced dead shortly afterwards.

With Timothy Cardinal Dolan among the mourners, Mayor de Blasio, Police Commissioner James P. O’Neill and Monsignor Robert J. Romano were among those who spoke. A motorcycle procession headed to the church, followed by the slow march of bagpipers playing “Amazing Grace.”

Before joining the Police Department in 2013, Officer Mulkeen graduated from Fordham's business school and worked as a financial adviser at Merrill Lynch in New York from 2007 to 2009.

“Brian could have followed a conventional path,” said Mr. de Blasio. “But something else called him. He wanted to do the job that was dangerous because that’s how you protect people.”

The Mayor called the officer “extraordinary” because “he realized the compassion that goes into his work.” He spoke of a teen named Henry who was arrested by Officer Mulkeen two years ago, who in an emotional tribute wrote that the cop stayed in touch with him and his mother, calling him “one of the good guys.” The officer even invited him to play basketball.

“Think about what that says about Brian; someone he arrested came to see him as a role model,” Mr. de Blasio said.

The church erupted in applause when the Police Commissioner posthumously promoted Officer Mulkeen to Detective First Grade, and presented the late officer’s shield to his father, Brian.

During his six and a half years at the NYPD, Officer Mulkeen made 270 arrests, and many involved taking guns off the street. On the night of his death, the officer and his colleagues attempted to stop two men outside of the Edenwald Houses, where there had recently been an outbreak of shootings, according to the NYPD. One of the men, Antonio Lavance Williams, who was on probation for a narcotics-related arrest in 2018 and had several prior arrests, ran off.

The Police Commissioner spoke of how battling against “the flood of illegal guns” was a hazardous, and too many times “thankless” job. “It takes a tremendous amount of courage to do the work Brian and his team do every day,” he said.

Mr. O’Neill said that notstanding the friendly-fire aspect of the incident, Officer Mulkeen’s death was solely because the criminal carried an illegal gun, ran when stopped for questioning and then fought with the cop. “Every cop knows that, and every New Yorker should know that,” the Commissioner said.

He listed cops who had been killed while on duty, including Detective Brian Simonsen, who was also killed by friendly fire this past February in Queens while responding to a burglary. “These are the names I repeat to myself every day,” he said, choking back his emotions.

Six officers carried Officer Mulkeen’s casket out of the church, which was adorned with a green and white NYPD flag. His father and mother, Camille, followed into the chilly winds.