Governing 'By Signs in a Protest' 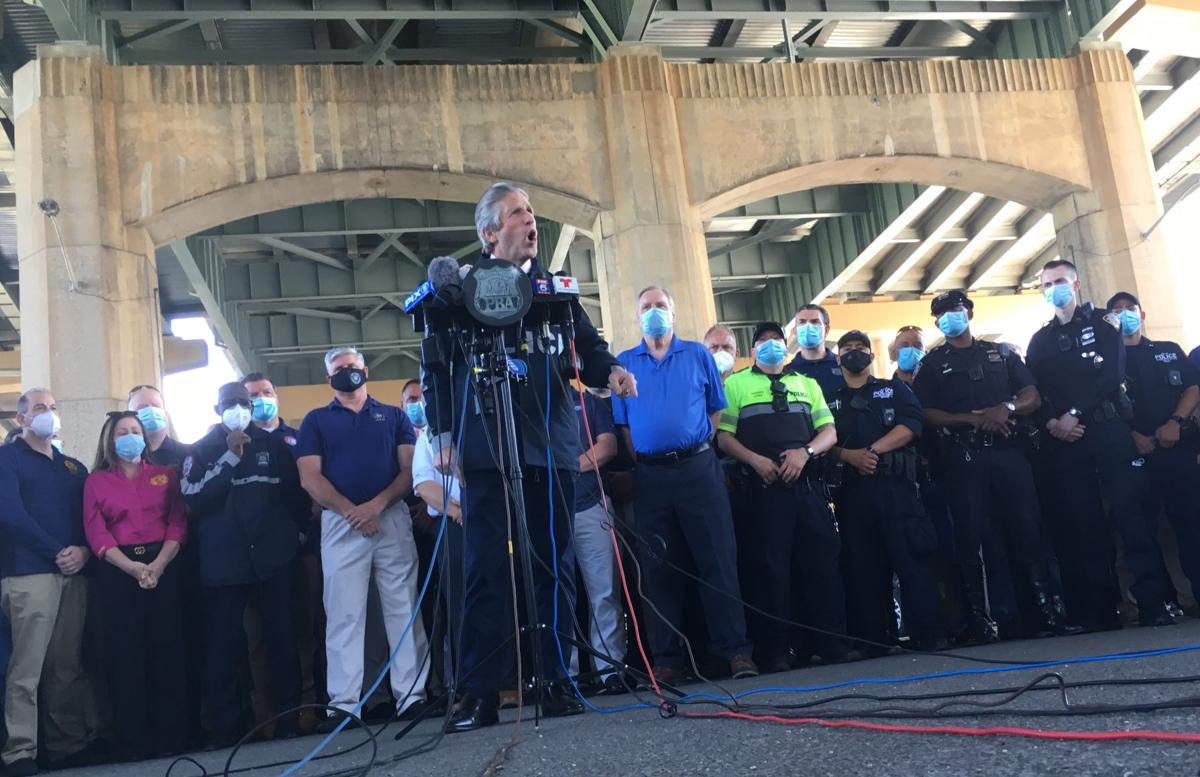 FEVERISH: During a June 9 press conference on Randall’s Island, Patrick J. Lynch, the president of the Police Benevolent Association, said that the numerous pieces of legislation directed at law enforcement being passed or contemplated by state lawmakers reflected the anti-police fervor gripping the streets and were poorly thought-out. Photo: Richard Khavkine/The Chief-Leader

During a press conference on Randall’s Island, Patrick J. Lynch, the president of the Police Benevolent Association, said the flurry of legislation was symptomatic of the “fever” that protesters brought to the streets following the killing of George Floyd May 25 by a Minneapolis police officer.

He warned that legislative efforts—which could include the repeal of a law that shields officers’ personnel records from public scrutiny—would have a lasting and damaging effect on the morale of what he said was already “the most restrained police department in the country.”

“They’re following the crowd. They’re legislating by signs in a protest,” he said of lawmakers.

“Why aren’t you speaking to all the stakeholders,” Mr. Lynch said at the press conference, which was attended by about 100 officers and dozens of union leaders from across the state. “Why aren’t you asking the question of law enforcement? Why aren’t you seeking our advice? Is it because maybe we’d be reasonable?”

He was also critical of city District Attorneys’ reluctance to charge many of those arrested during the looting that accompanied protests but were instead prosecuting officers.

“Now we’re being guided by those that were intent on violence, from outside our communities, that threw the stone, that broke the window, that caused the violence, that injured 300 police officers, some viciously. That’s who we denounce,” he said.

He did not address, until he was asked, the numerous allegations of violent conduct by officers against protesters and, in some cases, members of the press and the media.

Police, Mr. Lynch said, were being demonized for doing their jobs, including by protecting protesters.

“Policing,” he said, “is under assault.”

As he has throughout his 21-year tenure as head of the PBA, he fervently supported his members against allegations of wrongdoing during last week’s protests including by defending, later in the day, an officer from the 73rd Precinct who was earlier arrested and charged for violently pushing a woman to the ground near the Barclays Center on May 29, an incident captured on video and widely circulated on social media.

“Once again, Mayor de Blasio and the NYPD brass are sacrificing cops to save their own skin,” he said in a statement following the arrest of Officer Vincent D'Andraia, 28, on assault, menacing and other charges. “They sent police officers out to do the job with no support and no clear plan. They should be the ones facing this mob-rule justice.”

This week, the State Assembly has passed or is expected to pass bills that prohibit choke-holds, strengthen the public’s right to record police activity and keep that evidence, direct the State Police to equip its officers with body-worn cameras, and to more promptly report firearm discharges that could have struck a person.

Another bill would establish an investigative office within the Department of Law that would investigate allegations of corruption, fraud, use of excessive force and other abuses.

The Assembly is also likely to repeal section 50-a of the Civil Rights Law, which has been interpreted by both city officials, including in New York, and by judges to permit police departments to shield personnel records, including disciplinary matters, from public view.

City Council Members have also proposed several pieces of legislation, including a bill that would require the NYPD to establish a system that would record, track, review and evaluate police activity and identify officers who might need more training or monitoring. Another bill would oblige officers to keep their shield numbers visible.

Richard Wells, the president of the Police Conference of New York, which represents hundreds of police unions in Albany, said the legislation being passed or contemplated by state and Federal legislators reflected a disdain for policing.

“The message being sent...is ‘we don’t like you, we don’t respect you, we will not support you, we want you to go away,’ ” he said at the Randall’s Island event. “Police officers, because of this legislation, are going to be forced to choose between doing their jobs diligently, professionally and confidently, and doing the minimal amount necessary to maintain their employment but also to protect themselves and their families.”

Doing the job “the way it’s always been done” will bring about scrutiny such that officers will be continually investigated, prosecuted and, in some cases, jailed, he said.

The head of the Sergeants Benevolent Association, Ed Mullins, speaking after the event, suggested that the end result of the bevy of legislation could be chaos and confusion, on the streets and for police, with lawmakers at the local, state and Federal levels to blame.

“At the end of the day, it’s the people of the city of New York who are going to live with the legislation, good or bad," he said. “Don’t blame the cops. This is what you want; be prepared for what you get.”