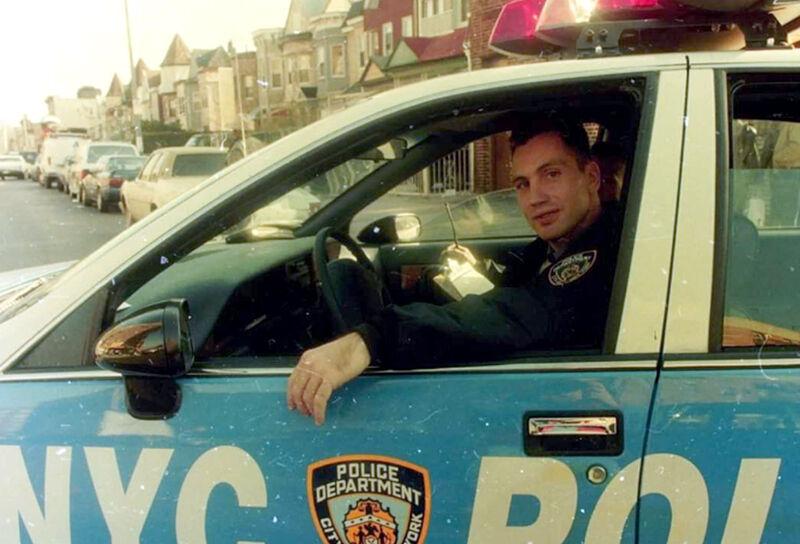 DISMAY: Police Officer Anthony Mosomillo of the 67th Precinct was shot and killed in 1998. A woman convicted of manslaughter in connection with his shooting death was paroled from state jail late last year. Although she was sentenced to two years in Federal prison for violating the terms of supervised release tied to an earlier narcotics conviction, the Police Benevolent Association said Betsy Ramos’s release, along with the recent announcement that the convicted killers of two other Officers, Michael Russell and Robert Sorrentino, would be paroled, represented an 'alarming trend.'  Photo courtesy of the U.S. Attorney's Office

Two men convicted of murder for the killing of police officers decades ago will be released on parole in the coming weeks, moves condemned by the Police Benevolent Association and the officers’ families.

The convicted murderers of Police Officers Michael Russell and Robert Sorrentino are the latest among more than a dozen cop-killers granted release in recent years by the state’s Parole Board, with the PBA saying it represents “an alarming and incomprehensible trend.”

According to the union, the impending releases of Sergio Voii, who shot and killed Officer Russell and a local businessman in 1979, and Russell Carroll, among five men convicted of killing Officer Sorrentino in 1980, will be the third and fourth persons convicted of killing cops to be released in the last three months and the 13th and 14th since April 2018.

The PBA said the releases were especially disturbing given the recent spike in murders and shootings citywide, “and as police officers themselves are being subjected to life-threatening and unpunished assaults.”

Patrick J. Lynch, the PBA president, said the releases of “killers who undermine the very fabric of a civilized society” were emblematic of Albany’s ”pro-criminal agenda.”

“This violates everything law-abiding citizens stand for: keeping our streets safe, respecting the sacrifice of police families, and sending a strong message to criminals that killing police officers will never be tolerated,” he said.

A statement from the State Department of Corrections and Community Supervision did not directly respond to Mr. Lynch's criticism, but emphasized the Parole Board’s independence, whose “members must follow statutory requirements which take ‎into consideration many factors, including statements made by victims and victims’ families, if any, as well as an individual’s criminal history, institutional accomplishments, potential to successfully reintegrate into the community, and perceived danger to public safety.”

The Board also considers recommendations regarding potential release from District Attorneys, the sentencing judge and defense attorneys. The department did not immediately release narratives of the Parole Board's decisions.

Mr. Carroll, now 66, could be released from Clinton Correctional Facility as early as July 28.

Although not the man who shot Officer Sorrentino, he was convicted of second-degree murder, robbery, weapons possession and other charges, and sentenced to 25 years to life. The others convicted for the Officer’s killing, including the trigger man, died in prison.

“After going through the agony of nine parole hearings over the years, we now have to learn this,” Officer Sorrentino’s sister Edna Doyle said in a statement provided by the PBA. “I guess they feel that our suffering is over. But we think of Bob every day. There will be no parole for him–-and no relief for his family.”

Officer Russell’s killer, Mr. Voii, 59, is set to be released from Fishkill Correctional Facility by the end of August.

He was convicted in 1981 of second-degree murder for killing the businessman, Edward Brugman, and of first-degree manslaughter for killing Officer Russell, and sentenced to 32 years to life.

Mr. Voii, who was 18 at the time, gunned down Officer Russell and Mr. Brugman in East New York during a softball game between officers from the 75th Precinct and residents. The teen and two others had intruded on the game, and, when told to get off the field by Mr. Brugman, Mr. Voii pulled out a revolver and shot him. Officer Russell, a 30-year-old married father of two young children, and other officers chased Mr. Voii, who shot and killed the officer after being cornered at the rear of a house on Essex St.

In a statement provided by the PBA, the Officer's widow, Grace Russell, said she learned of her husband’s killer’s imminent release just this month.

“I just don’t understand it,” she said. “How is it that someone can be heartless enough to murder two unarmed people and then later be able to go back into society and resume a life of freedom, a life he callously took from two others? What’s the rationale? Where is the justice?”

The two impending parolees are among dozens who remain in prison convicted for the killings of officers between 1972 and 1995, the period between the abolition of the death penalty in New York State in 1972 and the imposition of life without parole in 1995, now the usual sentence for convicted cop-killers.