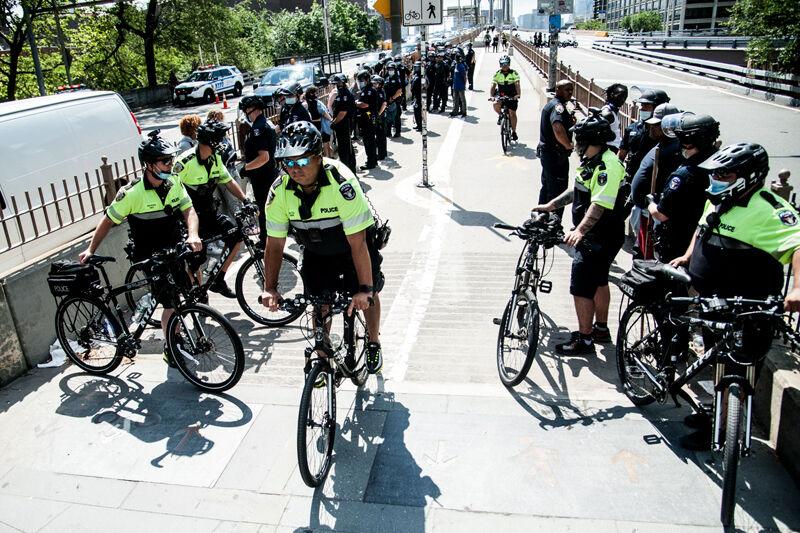 TAKING THE PEDAL OFF THE METAL?: A recent drop in arrests, even as shootings in the city continued to soar, prompted Public Advocate Jumaane Williams — long a critic of the police for being over-aggressive — to question whether cops were engaged in a work slowdown. The enactment of a law criminalizing officers' compression of suspects' diaphragms while making arrests has prompted them to handle confrontations more cautiously, often delaying responses while backups were summoned. The City Council is reportedly prepared to modify the law to deal with complaints that it puts cops in untenable situations, but the Police Benevolent Association says that nothing less than full repeal of the provision will solve the problem.
The Chief-Leader/Rebecca White

Public Advocate Jumaane Williams, one of the most-prominent advocates for police reform over the past decade, recently took the position that with some of those reforms recently enacted, cops may be engaged in a form of passive resistance: a work slowdown despite a dramatic rise in shootings citywide.

In an Aug. 20 letter to Police Commissioner Dermot Shea that he released to the media, Mr. Williams began, "New York City continues to suffer from a horrific rise in shootings across every borough, with the vast majority of victims being black and brown New Yorkers. As shootings and violence have continued for months unabated, rumors have circulated that the New York Police Department is taking part in a deliberate slowdown. This rumor continues to grow stronger as the death toll continues to rise. It is my sincere hope that you can demonstrate with certainty that no such slowdown exists within any individual precincts, and within the NYPD as a whole."

Rather than offering a private response, Mr. Shea opted to keep the dialogue in a public forum. Appearing on Fox News's "Good Day New York" Aug. 24, he said that staffing shortages and limits imposed on overtime after the City Council and Mayor de Blasio agreed June 30 to reduce the NYPD budget by $1 billion had reduced the police presence on city streets for much of the summer.

(Mr. Williams contended at the time that the budget cut was insufficient, and was particularly incensed that it did not lead to cancellation of a new police class scheduled for October to replenish the department's ranks after an unusually large group of retirements.)

"Right now, there is a fuse lit at both ends," the Police Commissioner said. "On one end, you have attrition going through the roof, and on the other end, you have an overtime budget that was decimated."

He called the "rumor" of a slowdown cited by the Public Advocate "absolutely not true," adding that when he heard such talk, "it does make my blood boil." He added that officers were "working, they're running towards danger."

Four weeks earlier, however, a veteran patrol cop told this newspaper that while no slowdown was occurring, changes in how cops handled their duties as the result of a new law subjecting them to criminal charges if they compressed the diaphragm of someone they were trying to arrest meant they were reacting more deliberately to situations in which such confrontations might take place.

That officer, speaking conditioned on anonymity, said concerns about being hit with criminal charges and a fine of $2,500 under the diaphragm-compression law led cops who in the past might have handled an arrest themselves to summon backups more quickly. Having four or six cops involved rather than two, he explained, limited the possibility that any of them would need to get the suspect on his stomach to make an arrest, since each officer could grab a limb and put the suspect on the ground without coming in contact with his diaphragm.

He also acknowledged that officers were shying from "clearing corners"—dispersing crowds that gathered and were creating a commotion because it wasn't worth risking a confrontation when no one was committing an illegal act at the time.

The New York Post reported Aug. 25 that the Council planned to modify the language in the diaphragm-compression portion of the new law "to clarify the parameters."

The paper quoted a Council insider saying, "The thing we've heard people say is, 'If you touch [someone's] back, you're going to jail.'" That person said the amendment would make clear that wasn't the grounds for bringing criminal charges, and an amended version of the law was expected to be presented to the full Council April 27.

The Police Benevolent Association, however, said that wouldn't be enough to undo the damage. Union President Patrick J. Lynch said in a statement the following morning, "Nothing short of a full repeal can repair the damage from this insane law. That won't happen, because the Mayor and the City Council have no intention of actually fixing this problem. They are content to blame cops for the mess they created."

Mr. Williams had asked the Police Commissioner in his letter to provide comparative data on arrests and charges between March and August in each of the past three years, broken down by precincts.

"Just as community trust in our police can degrade from over-enforcement, it can also degrade from underenforcement," he stated in his letter. "New Yorkers need to know that during an emergency, their law-enforcement officers will show up and act in the best interests of the communities they serve."

'A Prize for Cynicism'

Eugene O'Donnell, an ex-cop and former prosecutor who is a Professor of Law and Police Studies at John Jay College of Criminal Justice, said in an Aug. 25 phone interview, "Jumaane gets a cynicism award: you paralyze the police system and then complain they're not enforcing the law."

If a slowdown has occurred, Mr. O'Donnell continued, it is a city-sanctioned one, brought about by the advocacy of Mr. Williams and the City Council officials and Mayor de Blasio who were involved in the enactment of the diaphragm-compression aspect of the law that also criminalized chokeholds. He also pointed the finger at District Attorneys he said have grown reluctant to prosecute certain cases involving violence since the state's bail-reform law took effect in January.

"The people who have created this situation pin medals on themselves," Professor O'Donnell asserted. "They consider themselves to be people who belong in the history books. But they've gotten scores of people shot and dozens of people killed. And they don't believe in arrests."

Shootings and homicides were already above last year's numbers by the end of May, even though for much of the spring crime was down because of the reduction in people on the street due to the coronavirus pandemic. The gun violence began to escalate in June, and moved into overdrive after the diaphragm-compression law took effect and prompted more-cautious responses to some potentially troublesome situations by officers.

Ironically, during the week which concluded with the Public Advocate pressing Mr. Shea about a rumored slowdown, the NYPD reported 90 gun arrests compared to 70 during the same period in 2019. That hardly put a crimp in gun violence, however, with 45 people shot in a total of 35 incidents from Friday morning—the day of the letter from Mr. Williams—through that Sunday night.

The good news was that only one of the victims died, but that still placed the number of homicides for the year 69 above the total for the same span last year.

Professor O'Donnell said he didn't believe cops were engaged in a job action, but his assessment of what was occurring didn't figure to comfort the NYPD.

'No Appetite for Arrests'

"I think the New York City Police Department has become one of the most-useless in the country—by design," he said. "It comes directly from the elected officials. Other than [Staten Island City Councilman] Joe Borelli, I don't hear any elected officials calling for more arrests or prosecutions of felons caught carrying guns. No one's calling for the department to bring back the Anti-Crime unit," which was a key part of the anti-gun strategy but was embroiled in a few controversial street confrontations.

"So why," Mr. O'Donnell continued, "would the cops be out there trying to make arrests? No good can come from any kind of engagement, so engagement is being avoided at all costs. There's no appetite to make arrests or prosecute."