Union Likely to Emphasize Gap With Troopers For Long-Overdue Pact 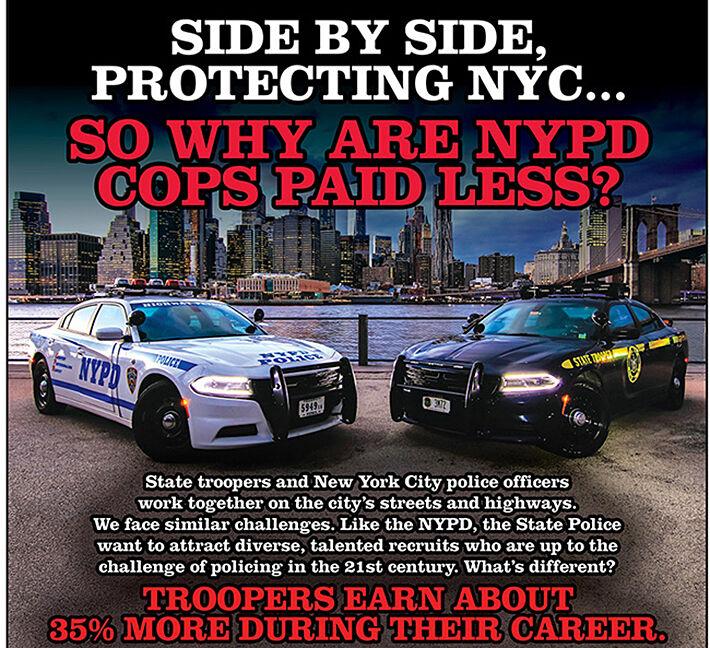 DOLLARS AND SENSE: As it entered a contract-arbitration process to replace a pact that expired more than four years ago, the Police Benevolent Association made its argument for raises far beyond the pattern for other city unions with an ad highlighting the huge gap in pay between its members and State Troopers who are assigned to New York City. Besides an edge in salaries, Troopers receive major differentials for hazardous duty and the higher cost of living here compared to upstate that city cops don't get.

Fifty-two months after its contract expired Aug. 1, 2017, the Police Benevolent Association Nov. 30 will make its opening arguments Nov. 30 before a three-man arbitration panel for closing an expanding salary gap between its members and Police Officers deployed by other agencies within the five boroughs by granting raises well above an existing city pay pattern.

City Labor Commissioner Renee Campion is expected to counter that maintaining the pattern that has given other city police unions raises totaling 7.95 percent over three years is essential to preserving bargaining stability, since those unions agreed to terms based on faith that the city would extend that pattern to other wage deals during this round.

Making the PBA's task harder are the city's uncertain financial future, with a $4.1-billion budget deficit projected for the fiscal year that begins next July, and the state Public Employment Relations Board rule that prohibits arbitration awards of longer than two years unless both sides consent.

With the final arguments in the proceeding scheduled for the second week in January, there's a good chance that an award won't be issued until the summer, and a two-year package would already be three years out of date at that point.

PBA President Patrick J. Lynch the following day said in a statement, "This arbitration is about a problem that has been holding our city back for 30 years: New York City simply does not pay its police officers a competitive wage. The NYPD's recruitment, retention and ability to fulfill its public-safety mission all suffer as a result."

He continued, "But while the basic problem is not new, it has grave implications for this particular moment in history. We are facing an existential crisis in the NYPD and a public-safety disaster on our streets. New York City police officers have never been saddled with more burdens and challenges. We have never worked in a more-dangerous and hostile environment."

The statement concluded, "This is no run-of-the-mill labor dispute. It is an emergency, and we hope the arbitration panel will treat it as such."

When the arguments begin--via Zoom, although Ms. Campion said some city officials would be together in a room for the proceedings--the PBA will put forward its case for the three days ending Dec. 2, and OLR will respond Dec. 6, 7 and 17. Final arguments will be given Jan. 11 and 12, with each side then being able to submit written briefs.

It's not hard to anticipate the positions the city will take, based both on the four previous arbitrations in which they have been involved since Mr. Lynch took the union's reins in 1999, and newspaper ads the union has been running in recent weeks.

The one time an arbitration panel during the past two decades made a significant departure from what the city characterized as an established pattern was in 2005. Other uniformed-union leaders had deferred to Mr. Lynch after he contended that he could ensure better terms for all of them if he negotiated the first deal, and the only city contract in place at that time was an overly modest District Council 37 agreement that granted raises totalling 6 percent over three years, with its costs somewhat reduced by lowering starting salaries for future hires.

'Who Says That's a Pattern?'

The chairman of the PBA panel, Eric Schmertz, was said to have privately questioned whether the DC 37 deal constituted a pattern that should limit what Police Officers could get, and he declared during the proceedings that he believed they should receive raises of 5 percent for as many as four years.

Mayor Michael Bloomberg's negotiators were aghast at that pronouncement. They said they would not agree to a deal of more than two years, and argued that to preserve bargaining stability and limit the city's budget costs, they wanted offsetting savings in the form of a reduced starting salary for Police Officers and a corresponding slowing of the progression to maximum salary.

When Mr. Schmertz consented to those givebacks for cops who hadn't yet been hired, the city succeeded in lowering the starting salary for Police Officers by more than $10,000, and those hired after the deal took effect were scheduled to receive $48,000 less during their first five years on the job than those with just a slight edge on them in experience.

Those cuts in pay for the "unborn" created major recruitment problems for the NYPD, prompting significant upward adjustments in both salary and the pay scale in a 2008 arbitration, although part of that gain was offset by reduced vacation time for new hires and a minor giveback that affected all officers.

Because the city following the 2005 award insisted on getting similar savings in pay from other uniformed unions for future hires and promotees if they wanted the two 5-percent raises for incumbent members, it created a rift between Mr. Lynch and those labor leaders, and was the last time they gave him a clear field on which to negotiate unencumbered by a pattern one or more of them had set.

This caught up to the PBA in a 2015 arbitration, when its unwillingness to reach a long-term contract providing 11-percent in raises over a seven-year period that had become the uniformed pattern forced it to accept a two-year award with a pair of 1-percent raises. That provoked angry union demonstrations outside both Gracie Mansion and the Upper East Side home of the arbitration chairman who issued that award.

The two sides reached a rare agreement at the bargaining table in January 2017, aided by the de Blasio administration's willingness to give PBA members a 2.25-percent raise above the uniformed pattern in recognition of its members' participation in the NYPD's neighborhood-policing initiative and the union clearing the way for officers to wear body cameras on patrol.

But that five-year pact expired just six months later, and that November, the PBA filed for arbitration, claiming a bargaining impasse existed. The process has been delayed twice: first by a serious illness that sidelined the original arbitration chairman, and later by the pandemic making it untenable for the parties to meet in the traditional conference-room setting for the arguments to be made and rebutted.

Mr. Lynch over the years, as had his predecessors, argued that holding Police Officers to the pattern used for other uniformed employees left them increasingly losing ground to their counterparts in Nassau and Suffolk counties. The city traditionally rebutted that position by saying the suburban counties had tax bases that could more easily offset the higher salaries, and did not have the longtime salary relationships with numerous other unions, including civilian ones, that required the city to hold the line on PBA deals.

Over the past decade, the PBA leader has adjusted his argument to note that NYPD Police Officer salaries had fallen behind jurisdictions in worse fiscal positions than the city, including Newark, and to cite better pay for Metropolitan Transportation Authority Police Officers, many of whom were deployed within the five boroughs.

During the current standoff, Mr. Lynch has trained his sights on the pay gap with State Troopers, who in recent years under then-Gov. Andrew Cuomo were increasingly deployed in the city. The contract for those officers, which was reached three years ago and will expire next April, raised maximum salaries for officers with at least five years' service to $101,776, compared to $85,292 for NYPD officers, who reach top pay after 5 1/2 years on the job.

Other differentials received by the Troopers for hazardous-duty work and expanded duties that date back more than a decade, a differential for those assigned to the city in recognition of the higher cost of living here compared to upstate, plus a $16,000 annual longevity payment for the most-senior Troopers that is believed to be the highest in the nation, bring their total compensation as high as $140,679, not counting overtime.

That wide gap was highlighted in a newspaper ad that continues to be featured on the PBA's website showing an NYPD patrol car and a State Police vehicle side by side, with ad copy that begins, "State troopers and New York City police officers work together on the city's streets and highways. We face similar challenges. Like the NYPD, the State Police want to attract diverse, talented recruits who are up to the challenge of policing in the 21st century. What's different?"

In larger type in all capital letters, the ad continues, Troopers Earn About 35% More During Their Career."

It then asks, "Which Job Would You Choose?"

The union has also cited the results of an NYPD-commissioned survey of officers in all ranks early this year that showed that 56 percent of the 5,935 cops who responded--about 16 percent of the total uniformed force--said they wouldn't join the department if they were making the decision now, with 79 percent saying they believed the city would be less safe in two years.

Those results, reported by the New York Post Nov. 20, showed disillusionment with changes made by Mayor de Blasio and the City Council over the past couple of years, with 80 percent of those who responded saying they feared taking aggressive action to deal with criminals would lead to their facing criminal charges, lawsuits, or unfair discipline by the NYPD.

One especially controversial piece of legislation that Mayor de Blasio enacted over strenuous objections from his top commanders in July 2020 would have subjected cops to criminal charges, as well as fines, if in subduing someone, they compressed that person's diaphragm, even if inadvertently. That change led cops to be proceeding with extra caution, often calling for back-ups rather than making arrests themselves that could have put them in legal jeopardy, until a judge in response to a union lawsuit put the measure on hold months after the survey was conducted.

'Past Our Breaking Point'

Mr. Lynch told the paper that the results "should surprise nobody. New York City police officers are well past our breaking point, and Mayor de Blasio and the outgoing City Council are still piling on with policies that punish cops and erode public safety. The intolerable environment and our substandard pay has every cop looking to get out as soon as they can."

Attrition in the ranks has been much higher over the past two years than in the past, particularly among officers who hadn't yet qualified for retirement at full pension, which normally is the point at which a majority of cops leave. While union leaders say that legal changes by both the city and state have made policing more difficult, Police Officers who left the force during that period figure to have cost themselves a considerable amount of back pay they would have gotten had they stayed until a new contract was in place.