By Kristina Sgueglia and Leah Asmelash 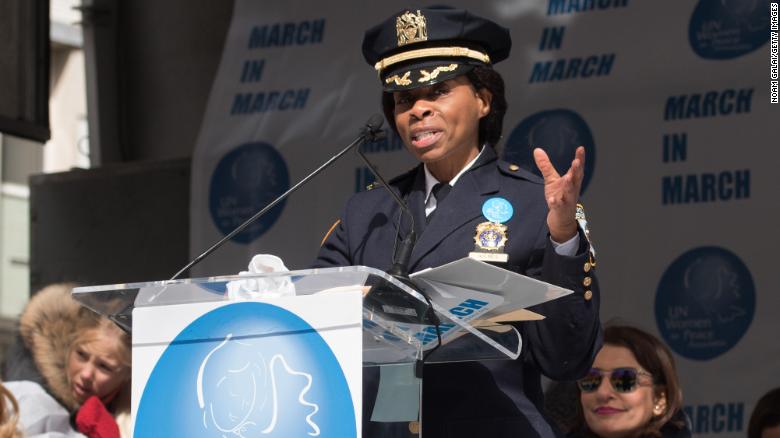 Juanita Holmes has been chosen as the NYPD's new Chief of Patrol.

The New York Police Department, the largest police force in the country, has appointed a Black woman to be its chief of patrol. That makes her not only the first African-American woman but the first woman ever to hold the seat that manages most of the department's uniformed officers patrolling the city.

The announcement came on Thursday from NYPD Commissioner Dermot Shea, who said he is "beyond proud" to name Chief Juanita Holmes to serve in the post.

"She has walked the walk, and she talks the talk," Shea said. "I think she is the complete package."

The promotion is also notable because it puts her in the conversation to be NYPD's next police commissioner.

New York Mayor Bill de Blasio has been criticized for not putting a black person in the position and has passed over Ben Tucker, the second in command at the NYPD and highest ranking black leader in the department, when hiring Shea and his predecessor James O'Neill.

Holmes, whose appointment goes into effect on Friday, has 30 years experience with the NYPD.

After beginning her career on patrol in 1987, Holmes rose through the ranks as sergeant, lieutenant, captain, deputy inspector, inspector, deputy chief, and finally assistant chief in 2016 -- the first African American woman to serve as borough commander in that role.

The rising star, who serves alongside 16 other immediate family members, also oversaw the department's School Safety Division and commanded both the Domestic Violence Unit and the Office of the Deputy Commissioner of Training.

Holmes said that in every role she has played thus far in her tenure "equality, fairness, transparency, has always been at the very heart of what I do."

"And as chief of patrol this is how I will lead every day" she said.
Holmes also said she planned to address race relations in the city by "strengthening" relationships, stating that "community engagement is ever evolving in the NYC police department."

"People want to be heard, and we're there to listen to them, but they have to play an intricate part in crime reduction as well as improving quality of life," Holmes said. "Strengthening those relationships is my plan."

De Blasio praised Holmes' hiring, saying he is "proud of the history being made."

"The first African American woman to be chief of patrol. These are important steps for our city," de Blasio said.

She will have direct leadership over more officers than are members of any other police force in America, he added.

The Police Benevolent Association of the City of New York, a union which represents police officers in the city, issued a statement on Twitter praising the appointment.

Chief Holmes' entire family embodies the NYPD's proudest traditions, so she understands better than anybody how our work and traditions are being undermined and attacked," PBA President Patrick J. Lynch said.

"New York City police officers desperately need competent leaders like Chief Holmes who can effectively push back against the politicians, empower us to do our job and help us to stop the city's backward slide. That is the challenge facing Chief Holmes — we give her our support as she takes it on," Lynch said.