'Nobody wants a health crisis to fuel a criminal justice crisis' 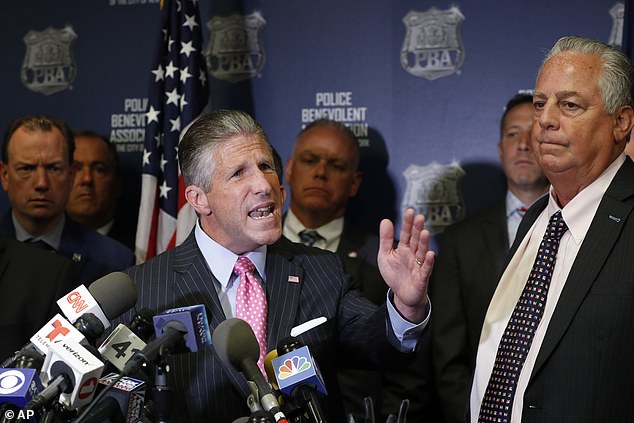 Patrick J. Lynch, president of the Patrolmen's Benevolent Association, said the district attorneys' decisions not to prosecute means officers are wasting their time enforcing social distancing and should stand down

District attorneys in New York City are vowing not to prosecute social distancing arrests, neutering the NYPD's effort to crack down on crowds that refuse to disperse.

Prosecutors in Manhattan, The Bronx, Brooklyn and Queens each announced their decision after a week of violent confrontations between cops and New Yorkers - and following the publications of statistics showing the enforcement is disproportionately affecting minorities.

Staten Island has no pending arrests, and the local district attorney has not said how he will handle potential cases.

'Nobody wants a health crisis to fuel a criminal justice crisis,' said Queens District Attorney Melinda Katz. She said she respects the challenges officers face with policing during the pandemic, but added, 'We are committed to nondiscriminatory and even-handed enforcement' of the laws.

Bronx District Attorney Darcel Clark was more blunt in an interview with CBS 2 New York, arguing 'Why should somebody get a criminal record for this?'

Patrick J. Lynch, president of the Patrolmen's Benevolent Association, said the district attorneys' decisions not to prosecute means officers are wasting their time enforcing social distancing and should stand down.

'There is absolutely no reason for police officers to be involved in social distancing enforcement, especially if district attorneys won't prosecute these cases,' Lynch told DailyMail.com.

'We're not just wasting our time— we're unnecessarily jeopardizing our health and careers. The NYPD brass has to stop this charade and let cops focus on our core public safety mission,' Lynch said.

However, there are some indications police have already begun easing up on enforcement.

The mayor's office and NYPD did not respond to requests for comment Monday.

Late Monday, the NYPD released figures showing that just 10 summonses were issued the previous day. No new arrests were announced.

Last week, the NYPD released figures showing that between March 16 and May 5, police issued nearly 400 summonses for social-distancing violations. At least 120 people were arrested during the same period.

After the district attorneys declared they would not prosecute these cases, the NYPD on Tuesday claimed the arrests were 'not social distancing arrests,' but were merely 'COVID-19 related' and involved offenses such as resisting arrest, drug possession and altercations caused by jumping a line while waiting to enter a supermarket.

'The crimes are characterized as COVID-19 related due to the circumstances of occurrence, remarks made by the arrestee at the time of the alleged crime or afterward, or statements made by a victim,' the NYPD stated.

The department also released updated statistics Tuesday stating there have been a total of 125 arrests through May 10. The racial breakdown was 66.4% black, 24% Hispanic, 7.2% white and 2.4% Asian.

The mayor was asked about the summonses during a press conference on Tuesday. He called it 'a very small number of summonses in the course of the core of this crisis,' and said that going forward, 'We would love them to be used very sparingly.'

He did not address whether the NYPD would continue to make the arrests.

Enforcement efforts increased late last month after thousands of people gathered for the funeral of a rabbi in Williamsburg, Brooklyn.

Mayor Bill de Blasio angrily denounced the gathering and called for the NYPD to start issuing summonses and even arrest people who don't follow orders to disperse.

Several violent confrontations followed and videos of the encounters went viral on social media, showing cops struggling with crowds in Brooklyn, The Bronx and Manhattan.

Following demands from politicians and community activists, police released figures late last week revealing that nearly 68% of those arrested were black, 24% were Latino and just under 7% were white.

The mayor called those statistics an indication that 'something's wrong we need to fix,' and said the enforcement protocol needs to be clarified. He also said the city will more than double the number of civilian 'social distancing ambassadors' to do community outreach.

But he said NYPD enforcement will still be needed.