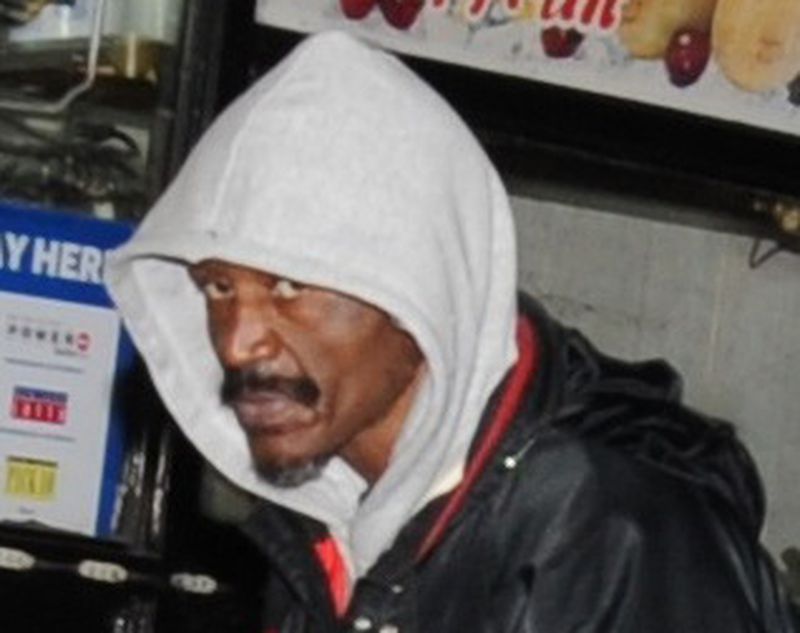 Anthony Manson, 50, at Manhattan Criminal Court on Jan. 16 2019, after he was released without bail on burglary charges yet again. (Sam Costanza/for New York Daily News)

An accused serial burglar was able to steal packages from Brooklyn apartment buildings over and over around Christmas thanks to the state’s new bail law, the Daily News has learned.

Anthony Manson, 50, was arrested for nine burglaries in Prospect Lefferts-Gardens and Crown Heights on Dec. 23, police said. He appeared before a judge on Christmas and was released — only to be busted for six more break ins on Jan. 3, cops said. He was released yet again — and then was nabbed for ripping off a Manhattan sunglasses store on Wednesday.

Even Manson was stunned when he walked out of court for the alleged burglary of the West Village sunglasses store, Center Stage Optique. A police officer said he saw Manson leave the store at 1:50 a.m. through a broken glass door carrying a stash of shades worth $3,995. He had a rock — a burglary tool of choice — in a suitcase, according to a criminal complaint.

“I’m surprised,” Manson said outside Manhattan Criminal Court on Thursday after receiving his third order of supervised release. “I never could make bail before. I always had to take the alternative: a program or jail.

Residents of a building on New York Ave. in Prospect Lefferts-Gardens say Manson — who has become a notorious figure in the neighborhood — is also suspected of snatching their packages.

Surveillance video obtained by The News shows a person who resembles Manson throwing a rock in a bag through a glass door and grabbing an armful of Amazon packages on Dec. 20 and Jan. 7. Footage also captured a similar man trying to hurl a bag through the same window on Tuesday.

“What is happening in our neighborhood is emblematic of what is happening all over the city," said Sasha Tcherevkoff, who lives in the New York Ave. building. "Petty criminals are committing crimes. Law enforcement is arresting them, processing them, and putting them right back on the streets, sometimes within hours.”

“The detectives and officers at the 71st (precinct) have really done an outstanding job in our helping our building address this issue, but quite frankly they are as frustrated and fed up as I am," Tcherevkoff, 46, said. "Bail reform is crushing them and making it nearly impossible for them to keep guys like Manson off the streets.”

Manson was arrested for one of those break-ins at the New York Ave. building, but the Brooklyn District Attorney’s Office declined to prosecute him. The DA declined to explain why, citing an ongoing investigation. A police source would only say Manson is considered a person of interest in those crimes.

Authorities say the state’s new bail contributed to Manson’s burglary spree. The law, which went into effect Jan. 1, but was applied by judges in late 2019, drastically limited bail for people accused of non-violent crimes like burglary.

“With these new laws letting people like this guy go... it’s just becoming a big waste of time,” said one NYPD detective. “Guys like him will keep coming out and we’ll keep arresting him, but we’re not making a difference anymore. You start to feel helpless... When we would grab a guy for property crimes like this guy or a robbery, we would always say, ‘At least we got him off the street.’ That’s not the case anymore."

Both Mayor de Blasio and Gov. Cuomo, who supported bail reform, have signaled that they are open to tweaking the law. Cuomo called it a “work in progress.” De Blasio said he would go to Albany to help “improve that bill.”

“This case has absolutely zero connection to the current bail laws and any suggestion to the contrary represents an orchestrated and cynical attempt to frighten people," said Redmond Haskins, a spokesman for he Legal Aid Society, which is representing Manson. “The Court was right to release our client for this non-violent offense instead of remanding him to a cage at Rikers Island. Pretrial incarceration of people who are presumed innocent based solely on their poverty benefits neither those accused nor public safety.”

A resident of a building that Manson allegedly burglarized also wasn’t ready to throw out bail reform over the unpleasant experience, which has created tension with the landlord.

“It’s a bigger issue than just the new law,” said Andrea, a 41-year-old teacher who asked her last name not be published because of her job.

Police said Manson has a criminal record of 39 arrests dating back to 1993.

“Why had he been let go all these years?” Andrea asked. “Watching the (surveillance) video, you can tell something isn’t right... You could see it on his face. He needs help.”

Under the new bail law, judges do not have discretion to assess a defendant’s likelihood to re-offend, unlike some other states that have overhauled the cash bail system.

“The only options I have are release on your own recognizance and supervised release,” said Manhattan Judge Heidi Cesare, at Manson’s latest arraignment on Thursday. Citing Manson’s lengthy criminal history, six skipped court appearances and litany of pending burglary charges in Brooklyn Cesare said, “I’m not confident you will return to court. Mr. Manson, I hope you prove me wrong.”

The Manhattan District Attorney’s Office is investigating Manson in connection with six other similar burglaries.

He was arrested again for throwing a brick through a glass door of a Fenimore St. building on Jan. 2 and 3 and taking packages. A prosecutor asked for $15,000 bail because of the previous burglaries, but a judge denied that request on Jan. 4 and Manson walked out on supervised release yet again.

A package of clothes addressed to Bishara was stolen last month. “If he did it the second time, for sure he’ll do it the third time. This guy should stay in jail!” Bishara, 29, said.

“Cops on the street are past the point of frustration, because we saw this new reality coming from a mile away. You can draw a direct line from Mayor de Blasio’s anti-cop campaign in 2013 to the present disaster," he said.