The officers pulled up to Adam Clayton Powell Jr. Blvd. and 133 St. around 3:45 a.m. to investigate a ShotSpotter activation, the NYPD’s high-tech sensors for detecting gunfire, according to police.

After investigating the scene and recovering shell casings and fired bullets, the officers tried to disperse the crowd of over 500 that had gathered on Adam Clayton Powell Jr. Blvd between W. 131st and W. 133rd Sts., according to police.

As the NYPD vehicles began to back away, the crowd grew louder, chasing the SUVs down the block and jeering.

At one point a man with a limp ran up and grabbed a bottle to throw at a cop vehicle while the man recording the video yelled, “Even the crack heads are getting these n----s.”

Cops stayed on scene till the crowd dispersed around 6:20 a.m., police said. No arrests were made and the incident is under investigation, according to cops.

“People have been cooped up with COVID and everything else” a neighbor who didn’t want to be named told the Daily News. “Plus it was late, people were drinking. That’s when things like that start happening.”

The five-minute video ends with cops retreating a block down Adam Clayton Powell Jr. Blvd. as the morning sun rises in the back ground.

“This is what a ‘light touch’ looks like,” the city’s largest police union, the Police Benevolent Association, tweeted in response to the video, adding that Mayor de Blasio and Council Speaker Corey Johnson “should be held responsible for surrendering our city.”

The Sergeants Benevolent Association also decried the clash. “De Blasio’s MESS,” the union tweeted “Where is that fraud Corey Johnson now? Corey are you calling for an investigation into the breakdown of the NYPDs Community Policing Program? Of course not this isn’t your neighborhood!”

The heated responses from the police unions comes after the city council proposed a $1 billion budget cut to the NYPD. The proposed slash in funding follows weeks of unruly protests in New York after the death of George Floyd at the hands of Minneapolis police.

While NYPD Commissioner Dermot Shea has been open to cutting small parts of the budget, especially surrounding ancillary services like school police, he warned, in a Pix11 interview, that major budget cuts while the city is facing a surge in crime would have a negative impact on the communities it aims to serve. 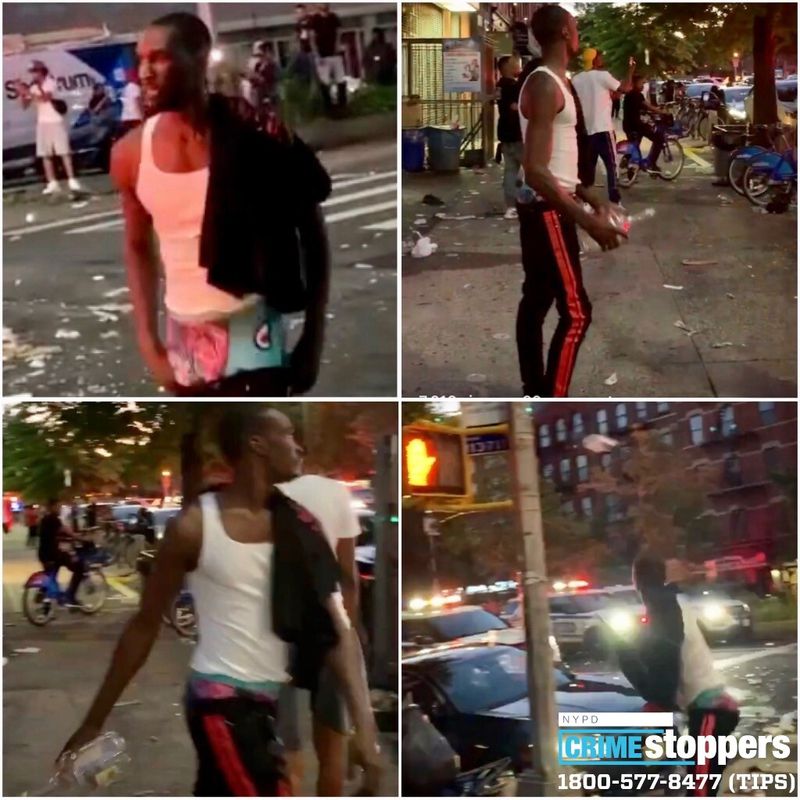 Police released photos of one of the bottle-throwers Sunday night and is asking anyone with info to call Crime Stoppers at (800) 577-TIPS.