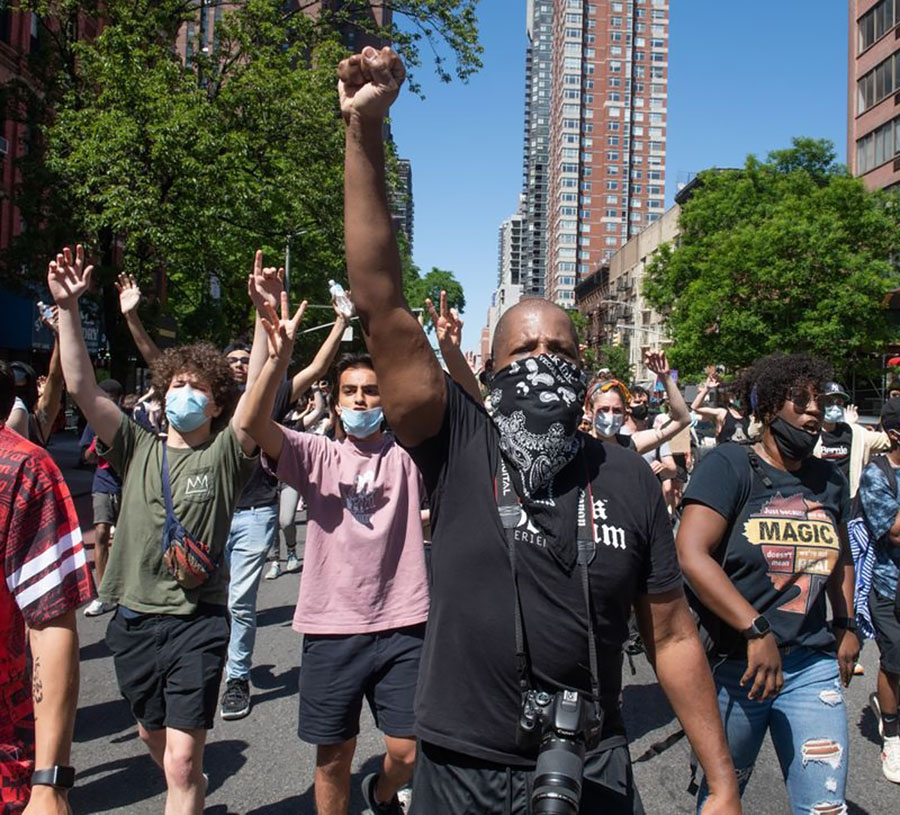 Outraged activists returned to the city’s streets Saturday in a second night of protesting and rioting over the police killing of a black man in Minneapolis.

Protests took place during the day and night in all five boroughs — but mostly in Manhattan and Brooklyn, where protesters burned police cars and disrupted traffic.

Police arrested dozens of protesters on the Brooklyn side of the Brooklyn Bridge — where instead of taking the walkway, numerous protesters took to the vehicle lanes, blocking car traffic and seemingly putting themselves in harm’s way.

Several videos emerged online of protesters and police vehicles getting in each others’ way — as the vehicles, often with sirens and lights flashing, menaced protesters who in turn threw garbage, rocks and bottles at them.

Crowds were reported outside Trump Tower on Fifth Ave. in Midtown, in Times Square, and in Union Square, among other locations.

Cops were still sorting out the chaos on Saturday night, and could only say that more than 50 people were arrested.

Earlier in the day, A crowd marched through Harlem, and then blocked traffic on the highway along Manhattan’s East River. And posts on social media showed cops amassing to control the chaos at Union Square.

By nightfall, protesters trekked across the Brooklyn Bridge, where cops met them with vans for those arrested — and blocked entrance to the footpath.

In one disturbing Twitter post, a crowd at Flatbush and St. Mark’s in Brooklyn pushed a single barricade in from to NYPD cruiser, until another cruiser pulled alongside and pushed the protesters aside.

Rep. Alexandria Ocasio-Cortez, D-N.Y., was appalled, tweeting, “NO ONE gets to slam an SUV through a crowd of human beings.”

After a wild round of protests on Friday night — which included a big crowd of protesters storming the 88th Precinct stationhouse in Clinton Hill — Mayro De Blasio and Police Commissioner Dermot Shea called for peaceful demonstrations, while other elected officials on the city to scale back the NYPD response to the increasingly tense situation.

The Rev. Al Sharpton, accompanied by Eric Garner’s mother Gwen Carr, led a rally of about 200 people at the Staten Island site where her son was killed almost six years ago by a police chokehold.

“Right at this spot is where we heard Eric Garner say — which six years later was said by George (Floyd) — ‘I can’t breathe,'” Sharpton told protesters before a march to the 120th Precinct.

Carr asked the crowd when the time would finally come where people won’t need to gather in mourning of a black life lost to police brutality.

“First it was Eric, and now it’s George, and we have to get justice for everyone,” she said. “I don’t condone violence, but I understand it ... We must stay vigilant and stay strong and focus our energy so we can get where we are going.”

In Brooklyn, hundreds of people gathered at the entrance to Prospect Park to express their anguish over the death of 46-year-old Floyd and their anger over police behavior the previous night. Cops, after briefly squaring off with demonstrators, hitting one man with a baton and pepper-spraying the crowd.

Hundreds more rallied in Union Square, a diverse group that marched through the Manhattan neighborhood.

“They keep killing us, man,” said Hassan Ayub, a 24-year-old black man from the Bronx. “We can’t deal with this anymore. The cops don’t see us as people.”

Police Commissioner Shea defended his department by citing the protester who traveled to Brooklyn from Catskill, N.Y., to fling an explosive device into a 71st Precinct police van with four cops inside.

“It is by the grace of God that we don’t have dead officers today," said Shea, adding multiple cops were injured. One gun-toting demonstrator was also arrested and a second weapon was found by police, according to the NYPD.

“It’s very difficult to practice de-escalation when you have a brick thrown at your head,” Shea said. “Coming to an assembly premeditated, with loaded firearms, with bricks, with Molotov cocktails, is the farthest thing from civil disobedience.”

The NYPD temporarily suspended all solo police patrols Saturday in response to the violence, with all officers prohibited from going out alone “regardless of bureau, command or assignment."

The commissioner said the NYPD would also police its own, and is reviewing videos of alleged misconduct by cops. De Blasio acknowledged watching these videos but called on demonstrators to peacefully voice their dissent rather than vent their outrage on the police.

“Some protesters came with an agenda of violence and incitement,” the mayor said. “They meant to harm police officers, and they harmed police officers. That is all purely unacceptable.”

The mayor said he was launching an investigation into Friday night’s demonstrations and plans to hold law-breakers accountable shortly before Brooklyn Borough President Eric Adams weighed in.

“The powder keg of racial inequity can quickly ignite into violence and disorder,” said Adams, a former police officer. “The protests that took place last night are yet another manifestation of that raw anger. The open wound of racism cannot be ignored.”

But police unions’ leadership were furious.

"Every leader in this city should be speaking up to condemn these attacks and working with us to prevent more violence. Sadly, they are either silent or working against us,” he said.

Elsewhere in the country, protests and riots prompted curfews in more than a dozen cities, including Atlanta, Denver, Los Angeles, Cleveland and Seattle. In Nashville, fires were reported in city hall and in a criminal courthouse. Thirteen police officers were reported injured in Philadelphia.

Across the country, nearly 1,400 people were arrested in 17 cities, the Associated Press reported.

National Guard troops were activated to patrol Salt Lake City in Utah, and in Texas, 1,500 state troopers were ordered to Houston, Dallas, Austin and San Antonio to help control protests.