Police unions protect us all

The head of NYC’s PBA defends his embattled organization 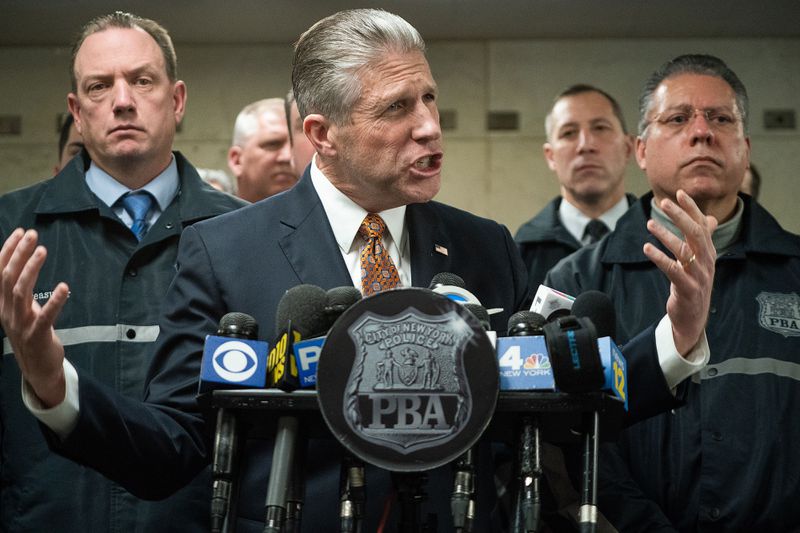 “If we want to eliminate violent police misconduct, then we need to eliminate collective-bargaining protections that shield bad cops.”

If I asked you to guess the author of that sentence, you would probably name any of the dozens of Democratic politicians or left-leaning academics and commentators who have publicly adopted this position in recent weeks.

You would be wrong. The author was conservative think-tanker and Washington Post columnist Marc Thiessen, an ally and sometime-collaborator of Wisconsin’s union-busting former governor, Scott Walker.

Thiessen’s attack, along with similar pieces by the editorial boards of the New York Post and Wall Street Journal, are evidence of a trend that should give every union member pause: Anti-labor activists are looking to capitalize on the current anti-police atmosphere to continue their assault on workers’ rights, especially civil servants’ rights.

Our brothers and sisters in the labor movement should be very careful. If they support a successful campaign to strip police officers of our union rights, they will see those same tactics repeated against teachers, bus drivers, nurses and other public sector workers across this country.

You don’t have to take our word for it. Thiessen and Walker were explicit about their plan. They pointed to the “model” of Wisconsin’s notorious Act 10, which they claimed “reformed collective bargaining for teachers unions and other public worker unions” in the state.

In fact, what Act 10 did was effectively end public sector collective bargaining in Wisconsin by prohibiting bargaining over anything but wages and imposing such enormous overhead burdens on unions (e.g. denying unions the right to automatically collect dues from employees’ paychecks, and requiring union members to vote to recertify their union every single year) that they couldn’t bargain effectively over wages, either. In the first five years after Act 10 passed, median teacher salaries in the state fell by 2.6% and median benefits were slashed by 18.6%.

Despite this clearly stated end game, we still have AFL-CIO affiliates and other liberals parroting the same talking points as conservative union-busters. How did this happen?

Much of it is rooted in ignorance — or in some cases, willful distortion — of what police unions do, especially here in New York City.

Police unions have the same basic role as every other union: We protect police officers’ rights as workers, their rights to fair pay and fair treatment under the law.

Many of the politicians now attacking have shown support for improved police officer pay and benefits in the past. But during the current crisis, not one of them has proposed a serious look at the connection between our pay and benefits and recruitment, hiring and retention, or the way that all those factors affect the NYPD’s performance. We would welcome such a conversation.

Instead, the political class has been exclusively focused on the other part of our responsibilities: the protection of police officers’ rights to fair treatment and due process. The myths and misconceptions in this area abound.

For example, a common anti-union talking point is that “police unions have traditionally used their bargaining agreements to create obstacles to disciplining officers.” In New York State, at least, that’s false. Police unions are prohibited from negotiating disciplinary issues. The police commissioner — and, by extension, the mayor who appointed him — have full authority over discipline.

Police unions – and all other unions – can and do press for legislation that will protect and advance our members’ rights. But those efforts are also the subject of outlandish caricature. Breathless reports of the “enormous sway” and “hefty resources” that the PBA and other police unions deploy in lobbying and political efforts miss the broader context of labor and other advocacy in our state.

The state lobbying watchdogs’ most recent annual report, for example, shows the city’s United Federation of Teachers, the New York State Nurses Association and New York State United Teachers unions among the state’s top lobbying spenders, with payouts ranging from $1.3 million to $1.6 million. That same year, the PBA spent just over $200,000 on lobbying — the vast majority of it in our fight to obtain the same pension benefits as every other police officer and firefighter in New York State.

At home, we can and do decline to defend our own members accused of crimes with no connection to their police duties. A PBA member currently accused of fatal child abuse has received no representation or support from the PBA, nor has another member accused of shooting an unarmed civilian during a drunken off-duty brawl.

But when members are accused of misconduct or a crime in the performance of their duties, we must work within laws that require all unions to provide fair representation to all members, even and especially in difficult, tragic cases. Once again, police unions are not the outlier here: The teachers union provides representation for members “facing criminal charges as a result of disciplinary actions taken against a pupil while the member was doing his or her job.” The transit workers union defends members who are charged in fatal on-duty accidents, and even waged a PR campaign against a proposed change to the right-of-way laws that would have unfairly criminalized bus drivers who were attempting to do their job.

Apart from activists’ ludicrous claim that transit workers were “demand[ing] to be allowed to kill people,” these other unions’ defense of their members never receive the kind of attention and outrage that police unions do. Why?

Many in the police reform movement would say, with reason, that the difference comes from police officers’ unique role in our society. That difference is an undeniable fact: as police officers, we have a different job than bus drivers or nurses or teachers, with different responsibilities and powers.

But those differences are confined to the job we do, not the rights we are guaranteed as employees or citizens.

As Supreme Court Justice William O. Douglas wrote some 50 years ago: “Policemen, like teachers and lawyers, are not relegated to a watered-down version of constitutional rights.”

Those who are now calling to strip police officers of their rights and protections — especially our right to form a union and bargain over the terms and conditions of our employment — should pause and reflect on Douglas’ words. They embody two fundamental truths that have been absent from the current debate.

The first truth: Our constitutional promise of equal rights for all cannot be realized by diminishing the rights of some. We cannot strengthen constitutional protections in one area by weakening them elsewhere.

Police officers and police unions have never asked for any rights in the criminal realm that are not available to all Americans. We recognize that there are problems in the criminal justice system — misguided laws, bad law enforcement strategies, dysfunctional courts — that are depriving too many Americans of their rights. None of those issues can be fixed by abridging the rights of accused police officers.

In the disciplinary realm, too, our only demand has been for the due process rights afforded to other civil servants. Another example: During the fight over repeal of Civil Rights Law Section 50-a, the law that protected police officers’ personnel records, none of the repeal proponents made mention of Education Law 3020-a, which expunges unsubstantiated accusations of misconduct from teachers’ records. Now 50-a is gone and 3020-a and analogous provisions remain, and police officers are left with fewer rights than other city employees.

Which raises the second core truth in Douglas’ statement: Police officers’ rights are not free-standing. They are intimately linked to the rights of all other civil servants — every single woman and man who draws a taxpayer-funded salary and carries out the public’s business.

At this moment, public sector union solidarity is critical. Distrust in government and its agents is at an all-time high. A three-month public health lockdown has only made it worse. Police officers, as one of the most visible faces of government, are now bearing the brunt of a popular backlash that has been brewing for some time.

Scott Walker and his allies are not going to waste this crisis. They know that divide-and-conquer is the key to ending unions and the rights they protect. Union members who are not listening to and understanding our arguments now — not on every policing question, but on the basic question of our collective bargaining rights — will soon find Douglas’ rule turned upside down. Other public employees will all be “like police officers,” by virtue of having no rights at all.