By ELIZABETH KEOGH and THOMAS TRACY 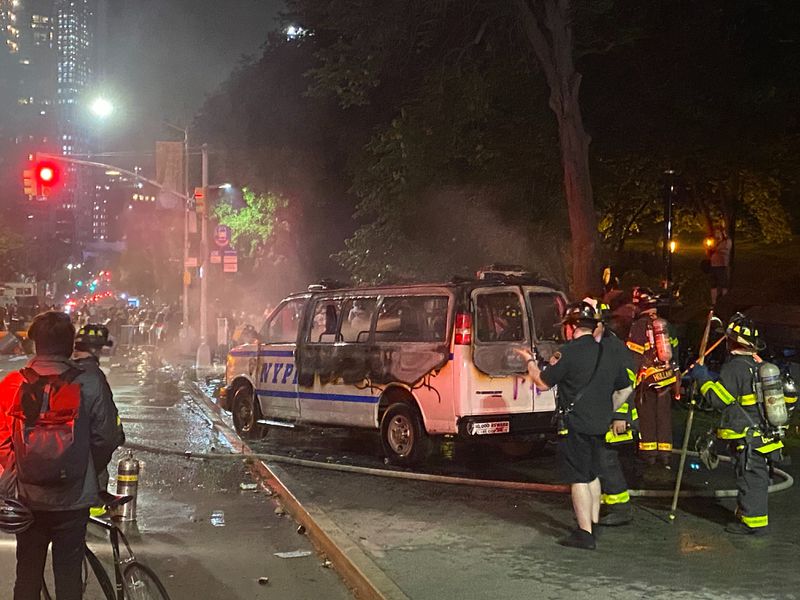 A pair of sisters from a sleepy upstate New York town are facing charges for hurling a Molotov at cops during a Brooklyn protest over the police custody death of George Floyd.

Samantha Shader, 27, will be prosecuted in Brooklyn Federal Court for lobbing a lit bottle of alcohol at a police van parked near the Brooklyn Museum around 11:30 p.m. Friday, authorities said.

The improvised explosive struck the driver’s side of the van and the four 71st Precinct cops inside managed to escape as the vehicle caught fire, authorities said.

“It is by the grace of God that we don’t have dead officers today," NYPD Police Commissioner Dermot Shea said Saturday.

The elder Shader was charged with attempted murder, attempted arson, weapons possession and reckless endangerment before the feds took over the case, cops said.

The siblings, from Catskill, in Greene County, tried to run away afterward but were caught nearby.

More than 200 demonstrators were arrested Friday night in lower Manhattan and Brooklyn. At least one other police vehicle was torched during the clashes, authorities said.

Shea and Mayor de Blasio said the siblings were among those looking to spread chaos.

“Some in the crowd aimed to do violence and they did do violence," de Blasio added. "They poisoned the whole atmosphere.”

Other protesters were arrested with bricks and brass knuckles, Shea said. At least one firearm was also recovered.

“Civil disobedience is key here,” Shea said. “We fully support the right to protest and we take great pride how we conduct ourselves and how people are allowed to express their concerns.”

“Four cops could’ve been killed last night when Molotov cocktails were thrown into a police car they were in. Other officers were seriously injured by bricks thrown — and a gun was recovered. These individuals are not protestors,” NYPD Chief of Department Terence Monahan tweeted Saturday. “THEY ARE CRIMINALS who’ll be arrested & prosecuted.”

At the Shader’s tidy upstate home — built of brick and wood, just outside Catskill’s main business district — a man who answered the door refused to comment. Catskill is about 130 miles from Brooklyn, on the Hudson River about halfway between Poughkeepsie and Albany.

Leaders of police unions expressed outrage at the sisters’ actions.

“These two individuals cannot be allowed to hide under the label of ‘protester.’ They are terrorists who tried to murder NYC police officers," said Police Benevolent Association president Pat Lynch.

“We will NEVER tolerate this — EVER!” said Paul DiGiacomo, head of the Detectives Endowment Association, who slammed the Shaders as “violent criminals.”

The video of a police officer pinning Floyd under his knee as the man gasped, “I can’t breathe" has sparked outrage across the nation with protests in most major cities.