NYC To Experiment With Police-Free Response To Mental Health Calls 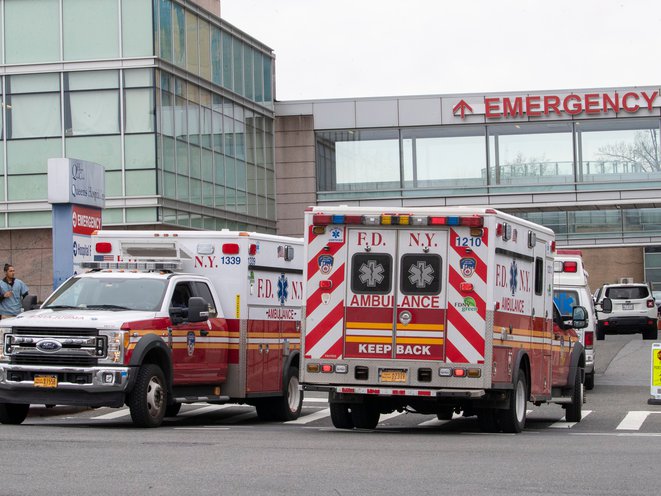 Mayor Bill de Blasio announced on Monday a pilot program to take police officers out of the response for non-violent mental health 911 calls.

The pilot, which would begin in February, would launch teams of mental health experts and emergency medical teams to respond to 911 calls about someone dealing with a mental health crisis.

Only in situations "involving a weapon or imminent risk of harm" would a police officer join the team—a decision that would be determined by EMS personnel and the NYPD, according to City Hall.

"We have to address their needs and we have to do it in new ways," de Blasio told reporters during a press briefing on Tuesday. "Let's be clear, it's a health-centered approach."

Advocates have long called for a new approach to responding to mental health calls—demands that intensified during a year of protests and after the killing of Daniel Prude in Rochester after police placed him in a spit hood. The Correct Crisis Intervention Today in New York City (CCIT-NYC), a group advocating for changes in how the city responds to mental health calls, has noted at least 16 people struggling with mental health issues in the past four-and-a-half years have been fatally shot by NYPD officers. Four others were shot and arrested.

But a year ago, the mayor previously announced a similar program of co-response teams with the NYPD and a mental health clinician that has suffered budget cuts. That program responded to calls involving 677 people in fiscal year 2020, according to the mayor's management report, well exceeding its target goal of 400.

For comparison, First Lady Chirlane McCray said there were some 170,000 mental health calls to 911, the "vast majority" of which are nonviolent situations.

"This is the first time in our history that health professionals will be the default responders in mental health emergencies," said McCray, whose key initiative on mental health, ThriveNYC, will coordinate the program. "Treating mental health crises as mental health challenges and not public safety is the modern, and more appropriate approach. And that is because most individuals with psychiatric concerns are much more likely to be victims or harm themselves than others."

The annual budget of the new pilot announced Monday would rely on existing resources within FDNY EMS, a City Hall spokesperson said. Last year's co-response team program and other related initiatives had received $37 million in funds.

The number of teams that will respond to calls during the pilot program not been decided. And the specific neighborhoods they'll cover has yet to be confirmed, though last year, the mayor's office announced the co-response teams would be sent to the 25th and 47th Precincts, covering East Harlem and the north Bronx.

"We have a lot of details to work through, but I am confident that working together we will ensure strong, health-centered respond to what are truly health emergencies," said FDNY's first deputy commissioner Laura Kavanagh.

Carla Rabinowitz, a project coordinator for CCIT-NYC, welcomed the progress, but worried police would still be dispatched in too many situations.

"We really believe that 911—which is within NYPD—will send too many calls to police," Rabinowitz said in a phone interview. "They gave very vague statements on if there's a weapon, there's going to be police. A weapon could be a butter knife. A fish hook."

Additionally, without peers with lived experiences with mental health to connect people struggling back into society, Rabinowitz says a person may just be brought to a hospital and given medication, before eventually being discharged without being connected to jobs or other resources.

"It's not just we want a person with lived experience to be there for the sake of being there—it's because we believe that the orientation of response needs to be a health team that's going to care for the person," Rabinowitz said. "The hospital model is based on a medical model approach which is you put someone on medication, often it’s too much medication, you don’t look at the whole life of the person in emotional distress."

Though NYPD Commissioner Dermot Shea called the pilot a "long awaited improvement," the police union was quick to criticize it.

"Police officers know that we cannot single-handedly solve our city's mental health disaster, but this plan will not do that, either," Police Benevolent Association President Pat Lynch said in a statement. "It will undoubtedly put our already overtaxed EMS colleagues in dangerous situations without police support."

The EMT workers' union is expected to be involved "intricately" in the planning process, said the FDNY's Kavanagh.

The FDNY EMS union Local 2507's president, Oren Barzilay, said: "The de Blasio Administration is now asking our members, some barely paid above the minimum wage, to step into this even higher risk role, without physical protection." He called for more PTSD counseling and better wages, and said the union "must have a full seat and voice at the table."

NYC Health + Hospitals, the city's public hospital system, will help train personnel in the coming weeks for a launch next year.

The pilot program is modeled after a program in Eugene, Oregon, the Crisis Assistance Helping Out On The Streets (CAHOOTS) program, in which paramedics and crisis workers have been incorporated into 911 calls. Of 24,000 calls last year, just 150 required police back-up under that program, de Blasio's office said.