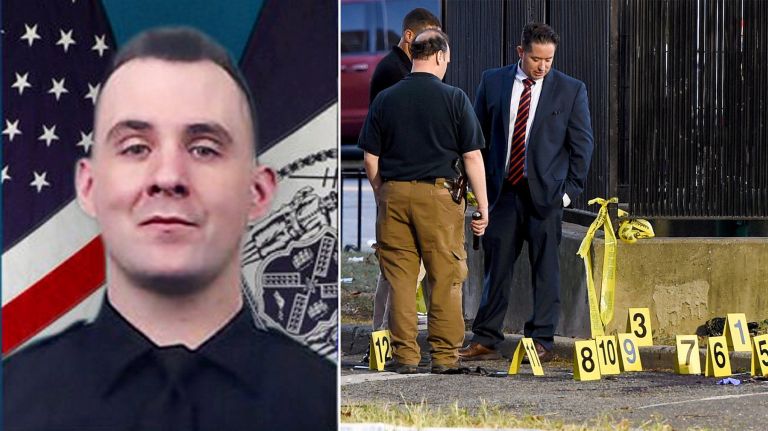 NYPD Officer Brian Mulkeen was killed by friendly fire during a violent struggle with an armed suspect in the Bronx early Sunday, the second cop to die from gunfire by fellow officers this year, police officials said Monday.

Two bullets fired from the guns of his fellow officers struck Mulkeen, 33, as he struggled on the ground with the suspect Antonio Williams, NYPD Commissioner James P. O’Neill told reporters during a briefing at police headquarters.

According to police, officers shot and killed Williams, 27, as he attempted to grab Mulkeen’s weapon in the struggle.

O’Neill said Mulkeen retained possession of his weapon throughout the struggle with Williams and discharged it five times. It remained unclear Monday whether any of those rounds hit Williams, the police commissioner said.

“This is a tragic case of friendly fire but make no mistake we lost the life of a courageous public servant solely due to a violent criminal,” said a grim-faced O’Neill.

On Monday, the city medical examiner disclosed that Mulkeen suffered bullet wounds to the head and torso. In February, NYPD Det. Brian Simonsen, 42, of Calverton, died after he was hit by friendly fire as he and other cops responded to a robbery in Queens.

Mulkeen lived in Westchester County and had been a cop for more than six years. He was shot near the Edenwald Houses, a public housing complex in the Edenwald section of the Bronx, while working in plainclothes on an anti-crime patrol, officials said. Mulkeen died at Jacobi Medical Center in the Bronx. Deputy Chief Kevin Maloney of the NYPD's investigation unit said Mulkeen was wearing a protective vest.

O'Neill said a total of 15 rounds — including the five fired by Mulkeen — were discharged in a span of 10 seconds. Investigators recovered a .32 caliber revolver officials said Williams was carrying when he ran from Mulkeen and other officers before the struggle, according to police. The revolver had originally been purchased in 1971 in Richmond, Virginia, Maloney said, adding that the whereabouts of the gun since that time were being traced.

Police were still in the early stages of the investigation and there will be a review of body camera footage recorded by five of the officers, O'Neill said. Mulkeen didn’t have a chance to activate his camera, the commissioner said.

At some point, O'Neill said, the videos might be released to the public.

The commissioner said he had viewed some of the camera recordings and appeared to have been moved by what they revealed about Mulkeen’s actions. The fallen cop and former standout track athlete at nearby Fordham Univesity displayed “incredible, incredible courage,” O'Neill said.

Some 24 hours before he died, Mulkeen had arrested Jermin Wright, 27, of the Bronx, on a gun charge. Mulkeen and other officers stopped Wright and found him in possession of a loaded .40 caliber Smith & Wesson handgun with its serial number defaced, officials said.

In the minutes before he was shot, Mulkeen and other anti-crime officers were on patrol by the Edenwald Houses in response to an earlier gunshot-locator activation — indicating gunfire — in an attempt to prevent possible retaliation, a police source said.

In February after Simonsen’s death, O’Neill said the NYPD did an after-action assessment about police tactics and he expected that would happen again in the friendly-fire killing of Mulkeen.

“With every incident which happens with the NYPD there is opportunity to learn,” O’Neill said. “We will take a look at this.”

In light of recent concerns about police mental health, O’Neill said the NYPD offered cops involved in the shooting mental health counseling. He seemed to bristle when asked if any disciplinary action would come as a result of the officer's death.

“You need to put this in perspective here, what were these police officers doing?“ O’Neill asked rhetorically. “What is their job? To get guns off the street and that is what they were doing.”

Patrick J. Lynch, president of the Police Benevolent Association, the labor union for the NYPD's rank and file officers, warned against the "blame the cops game."

"That perp is the one who carried an illegal gun onto our streets," Lynch said in a statement. "He is the one who chose to fight with the cops. He is solely responsible for our hero brother’s death.”

Although the NYPD didn’t release funeral arrangements for Mulkeen, an employee at Smith, Seaman & Quackenbush Inc. Funeral Homes in the Orange County town of Monroe, confirmed that a wake for the officer is scheduled there from 1 to 4 p.m. and 6 to 9 p.m. Thursday.

The funeral home is at 117 Maple Ave. in Monroe. A funeral Mass is scheduled for 11 a.m. Friday at The Church of the Sacred Heart,  26 Still Rd., also in Monroe. Details about interment were not available.