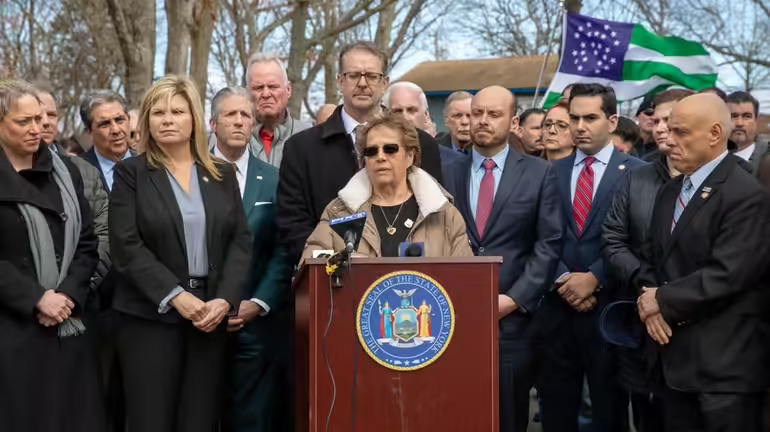 The widow of a slain NYPD officer, joined by two congressmen, local elected officials, and police union leaders Sunday in Deer Park, demanded that SUNY Brockport rescind a speaking invitation to a former Black Panther who was convicted in the 1971 murders of two cops.

Jalil Muntaqim, paroled in October 2020 after spending nearly 50 years in prison for the slayings of NYPD Officer Joseph Piagentini and Officer Waverly Jones, is scheduled to speak on April 6 to students in SUNY Brockport, in western New York State.

“He should have never been released from prison,” Diane Piagentini, the Deer Park widow of Joseph Piagentini, told the scores of police officers and supporters who attended the Sunday morning protest at Fabio Buttitta Memorial Park, which includes a playground named after her husband. “You kill a cop in New York State, you should go to prison for the rest of your life.”

Muntaqim was invited to speak on the Brockport campus by a faculty member, according to the school’s website, who characterized Muntaqim as a “political prisoner.” The school said it disagrees with that characterization but recognized the faculty member’s decision to call him that.

“Academic freedom gives faculty a great deal of autonomy to invite guests of their choosing to address our students,” the website said.

“They have a right to pursue research, discuss subject matters, and engage in dialogue. SUNY Brockport believes in freedom of speech and wants to continue to encourage the willingness of the community to engage in critical and respectful dialogue.”

When asked for comment on Sunday’s protest on Long Island, Muntaqim told a reporter to ask the public how it feels about “the police deciding who has the right to speak and who does not.”

“It is the same thing they do in China and in North Korea,” said Muntaqim, 70. “In New York, the police are trying to silence dissent.”

Muntaqim was originally scheduled to speak on the Brockport campus next month, but the school moved the event — entitled “History of Black Resistance, U.S. Political Prisoners & Genocide: A Conversation with Jalil Muntaqim” — online to mitigate security concerns.

The school also said it would not pay Muntaqim a $1,300 speaking fee. A private donor has agreed to pay Muntaqim for his talk.

Muntaqim, who changed his name from Anthony Bottom after converting to Islam while incarcerated, joined the Black Panther Party at the age of 16 after the assassination of the Rev. Martin Luther King Jr. and the Black Liberation Army when he was 18. He remained politically active while in prison, leading campaigns to improve conditions and establish rights for prisoners. Muntaqim earned degrees in sociology and psychology as well as numerous certifications, according to a recent profile in the Rochester Democrat and Chronicle. He served for decades as a teacher and mentor for younger inmates.

But to those at the Deer Park protest, Muntaqim is nothing more than a cop killer.

“Anthony Bottom is a domestic terrorist,” Zeldin, the Republican Party’s nominee for New York governor. “He is not a political prisoner.”