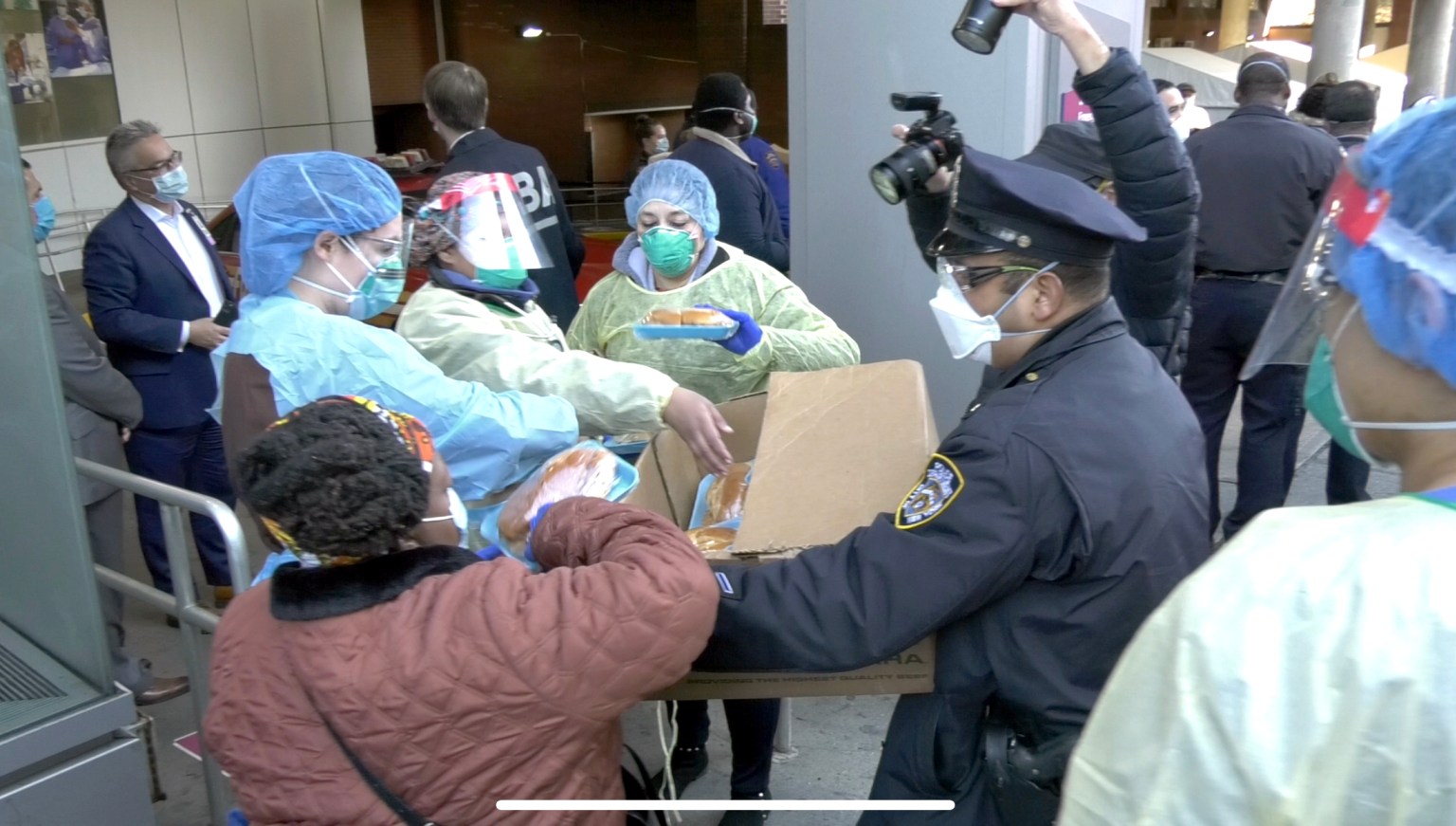 As New York City hospitals brace for a wave of further sickness and death that could overtax the entire healthcare system before the ‘flattening of the curve’ is reached in the next ten days, members of the New York City Police Benevolent Association (PBA) took time out to thank the staff of Montefiore Hospital.

PBA president, Patrick Lynch joined a few dozen members of his union outside Montefiore Children’s Hospital on Bainbridge Avenue at 8:30 a.m. on Monday, April 6, to show their appreciation, delivering drinks and 1,000 sandwiches, hastily made by Panico’s Community Market in Smithstown, Long Island, and purchased with PBA funds. Lynch told a gathered crowd, “Today we have the honor, as New York City police officers, to come here and say thank you to fellow first responders.”

Lynch added, “As you saw the nurses and the staff leaving, they were saying, ‘I just finished a 16-hour tour. I’m going home, sleeping for four hours and coming back.’ That’s what this crisis takes. It takes everyone working together.”

Lynch assured those present that his team knows the City comes together in times of need. “We know police officers stand patch-to-patch with the other uniforms to get this done, because we’ve seen it before,” he said. “We’ve seen it on 9/11, we’ve seen it during [Hurricane] Sandy, and we’re seeing it again here today and every day at all hours in the City. So today, we’re here to say thank you to the nurses and doctors in this hospital.”

The PBA’s efforts today were also supported by the NYPD Lieutenants Benevolent Association (LBA). Its president, Lou Turco released a statement echoing Lynch’s praise of the hospital staff.  “We wanted to highlight the courage of the nurses, doctors and staff at Montefiore, who wake up every day to work long hours and risk their own health to save lives,’ he said. “We want them to know that we are here for them, the way they have always been there for us. Their strength, skills and commitment will get our city through this crisis.”

At Monday’s daily coronavirus press briefing, Gov. Andrew Cuomo confirmed that 130,689 people across New York State have been infected by the virus to date, and 4,758 have died. According to the City’s Department of Health, the number of those infected in the five boroughs of New York City now stands at 68,776. The Bronx still ranks third highest in terms of positive cases, behind Queens and Brooklyn, with 13,680.