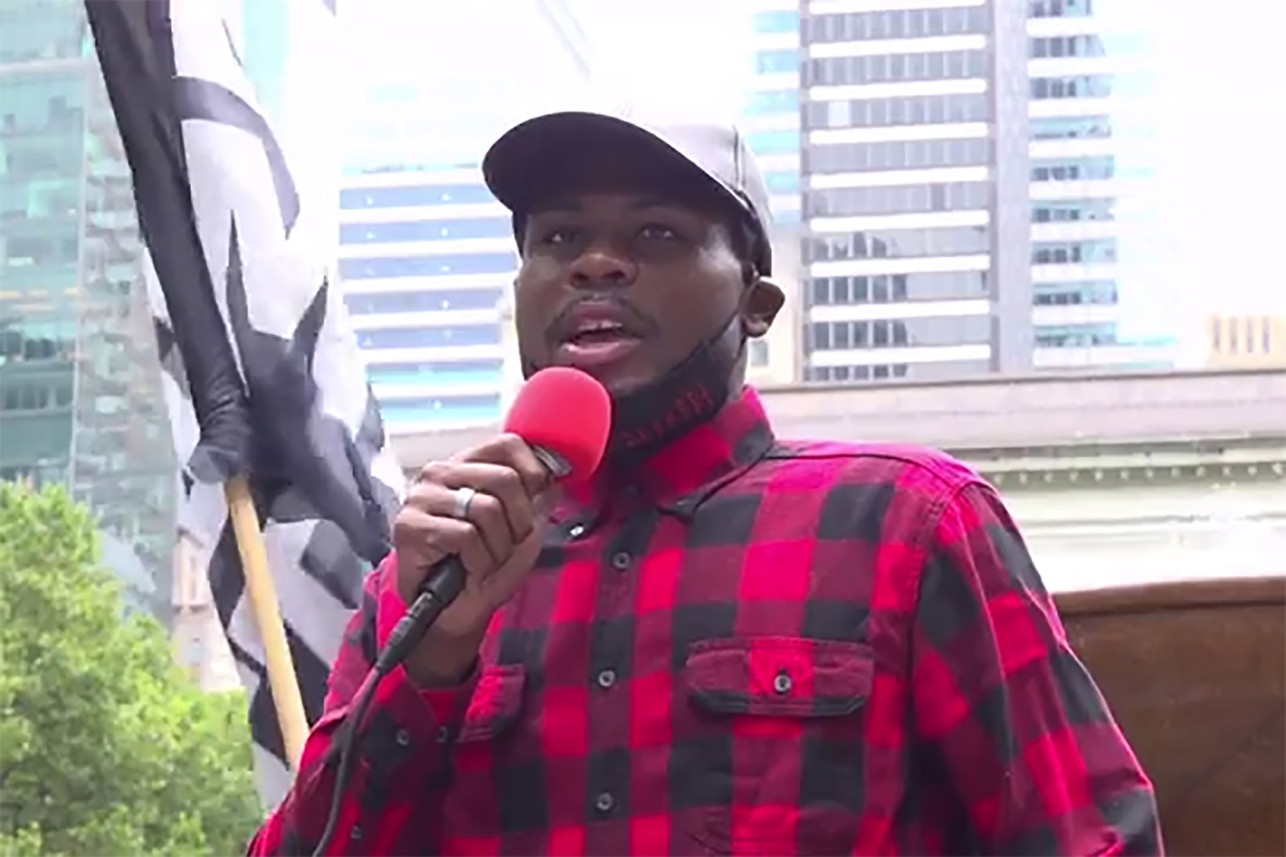 Derrick Ingram speaks at a protest in Midtown Manhattan before turning himself in today. Scootercaster/FreedomNews.tv

An accused cop-assaulter whose angry fellow Black Lives Matter demonstrators forced two dozen officers to retreat from his Hells Kitchen building surrendered a day later Saturday, with his crowd of supporters still in tow — but he was sprung on reduced charges hours later.

“He lowered the charge because he is afraid of the protesters,” the source complained.

Ingram, accused of temporarily damaging an officer’s hearing by shouting directly into her ear with a battery-powered bullhorn, had initially been charged with felony assault in the second degree, a charge that recognizes any injury-causing attack on a cop.

Ingram now faces as little as no jail if convicted, as opposed to the potential maximum of seven years prison for felony assault.

The DA’s office gave no explanation for the reduced charge, on which Ingram was released with no bail Saturday night.

Instead, a Vance spokesman issued a statement condemning the NYPD.

Ingram wouldn’t open his door, and instead livestreamed the massive deployment through his apartment window, attracting a crowd of shouting supporters.

The six-hour standoff ended when NYPD Commissioner Dermot Shea ordered the cops to leave — a move that left police union brass condemning what they saw as a cowardly capitulation to mob rule.

“Commissioner Shea made the right decision to call off the operation,” de Blasio said. “Assaulting an officer is unacceptable and will always lead to consequences, but arrests must be made properly.”

Ironically, cops had tried but failed to identify Ingram in the days after the June 14 assault, which happened 5 p.m. at 47th Street and Broadway in Midtown, a law enforcement source said.

Only after Ingram shouted in another cop’s ear with a bullhorn at a subsequent protest, in Bay Ridge, were they able to identify him, the source alleged.

After Ingram’s arraignment on the new misdemeanor assault charge Saturday, the DA issued this statement:

“Our office does not condone the extraordinary tactics employed by police on Friday.

“These actions were disproportionate to the alleged offense that occurred two months ago, and unjustifiably escalated conflict between law enforcement and the communities we serve.”

“This is ludicrous,” a Manhattan cop who has been assigned to the sometimes violent protests told The Post of Ingram’s quick release from custody.

“He attacked a police officer. What does he have to do to get bail, seriously injure a cop? Or worse?” 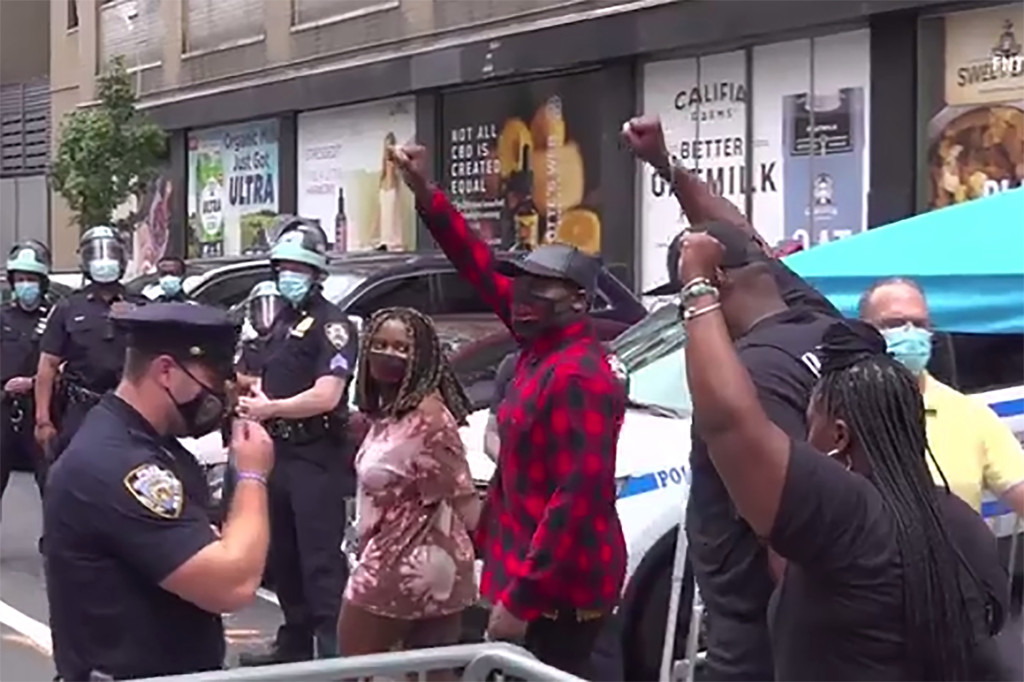 Derrick Ingram turns himself in at the Midtown North precinct today. Scootercaster/FreedomNews.tv

“Is there any doubt who is in charge in this city now? The criminal mob is dictating their terms to the NYPD brass and district attorneys, who are tripping over themselves to comply,” he said in a statement.

“Police officers want to know: What are we still doing out here? Why are our leaders sending us out to enforce laws they don’t believe in?

“And what are we supposed to tell the New Yorkers who are watching us retreat while violence overwhelms their streets?”

“Another slap to the face of every NYPD cop and those they are trying to serve, this time by Manhattan District Attorney Cy Vance,” responded Paul DiGiacomo, president of the Detectives’ Endowment Association.

“As violence plagues New York City, our elected officials are more worried about the criminals who continue to victimize residents and destroy neighborhoods. These so-called leaders have a responsibility to keep people safe — and they are failing every New Yorker.”

Ingram heads a Black Lives Matter protest group that bills itself on its Instagram page as “a collective of nonviolent activists.”

“I just want to say I’m thankful for all the love and support and kind words and the amazing outreach and kindness I received in the last 24 hours,” the soft-spoken Ingram said Saturday morning as he addressed supporters at a Bryant Park rally before the group marched to the Midtown North Precinct station house on West 54th Street for his surrender.

“I’m highly traumatized,” he said, “from everything, from the drones, to the dogs, to the lies that have been told by the NYPD, and I’m ready to make a change.

“I think we should focus our efforts on getting Commissioner Shea out of office.”

“Yesterday, we stood up to the biggest goddamn gang in this nation, and we won. They waved their white flag. They took their illegal occupation, and they backed it down the street,” a demonstrator told the crowd over a loudspeaker.