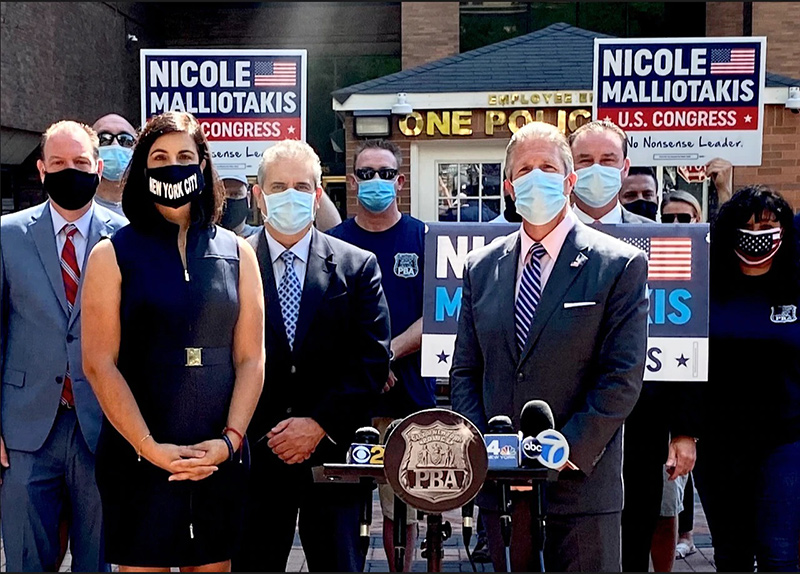 PBA President Pat Lynch made the announcement Monday morning outside One Police Plaza in Manhattan.

Malliotakis, Lynch said, has always stood by the men and women of the NYPD during her five terms in the state legislature, calling her a “true friend” and saying “we have work to do.”

“This is the most hotly contested race in New York City this November, and it creates the opportunity for our members, their families, friends and all supporters of the NYPD to send a resounding message to every elected official in New York City,” Lynch said.

“Law-abiding New Yorkers are ready to take this city back,” he continued.

Malliotakis said she is proud to accept the PBA’s endorsement, adding she was always taught by her parents to respect and honor the NYPD.

“I continue to hold that belief today on both a personal level and as an elected official,” Malliotakis (R-East Shore/South Brooklyn) said.

“In Congress, I will do what I have always done; fight to get the NYPD the funding they need, work to create common-sense legislation that supports law enforcement, not criminals, and do anything I can to honor and support any member of law enforcement and their families when an injury or death occurs in the line of duty. Thank you for support, I will never forget it. Stay safe,” she said.

During the announcement, Lynch called out Rep. Max Rose (D-Staten Island/South Brooklyn), saying he and other elected officials have “joined the anti-police mob.”

”Her opponent, Congressman Max Rose, has claimed he supports law enforcement. But when it came time for him to stand tall and show that support, he chose the opposite. He chose to take part in a June demonstration on Staten Island where marchers carried signs reading, ‘Abolish the NYPD,’ ‘Blue Lives Murder’ and ‘Defund the Police’ as the crowd chanted those slogans and others as they converged on the 122nd Precinct,” Lynch said.

“Congressman Rose, you can’t have it both ways. You made your choice. Now New York City police officers will make ours,” he said.

When asked about Lynch’s comments, a spokesman for Rose referred to his endorsement from the New York State Court Officers Association and remarks made by President Dennis Quirk.

“Now more than ever, we need elected officials who work with law enforcement to keep our communities safe -- Max Rose has done that and more. He has secured millions of dollars for the NYPD to fight terrorists, took on his own party to demand changes to flawed New York State bail reforms, and made sure our 9/11 and COVID-19 first responders received the benefits they earned,” Quirk said.

Rose’s camp also referred to his column in the Staten Island Advance, titled “Defunding the police is shortsighted and wrong,” as well as money he helped secure for Homeland Security, increases in law enforcement mental health programs, and helping to ensure that Staten Island District Attorney Michael McMahon’s office was not cut during #DefundThePolice efforts in the City Council.

The PBA also endorsed President Donald Trump, who tweeted out his endorsement of Malliotakis for Congress and recently spoke about her and Rose during an interview.

”On August 14th we endorsed President Trump. If he is to succeed as President, he needs like-minded Americans serving in the House and the Senate. In addition, there are currently no Republican members of the New York City congressional delegation. How can our city, our police officers or our citizens expect to get a fair deal out of a Washington, when we don’t have a Republican member of Congress advocating for us in that two party town?” Lynch said.

Trump told the New York Post that Rose is a “fraud,” and Staten Islanders should not be represented by him; he said Malliotakis would do a “great job.”