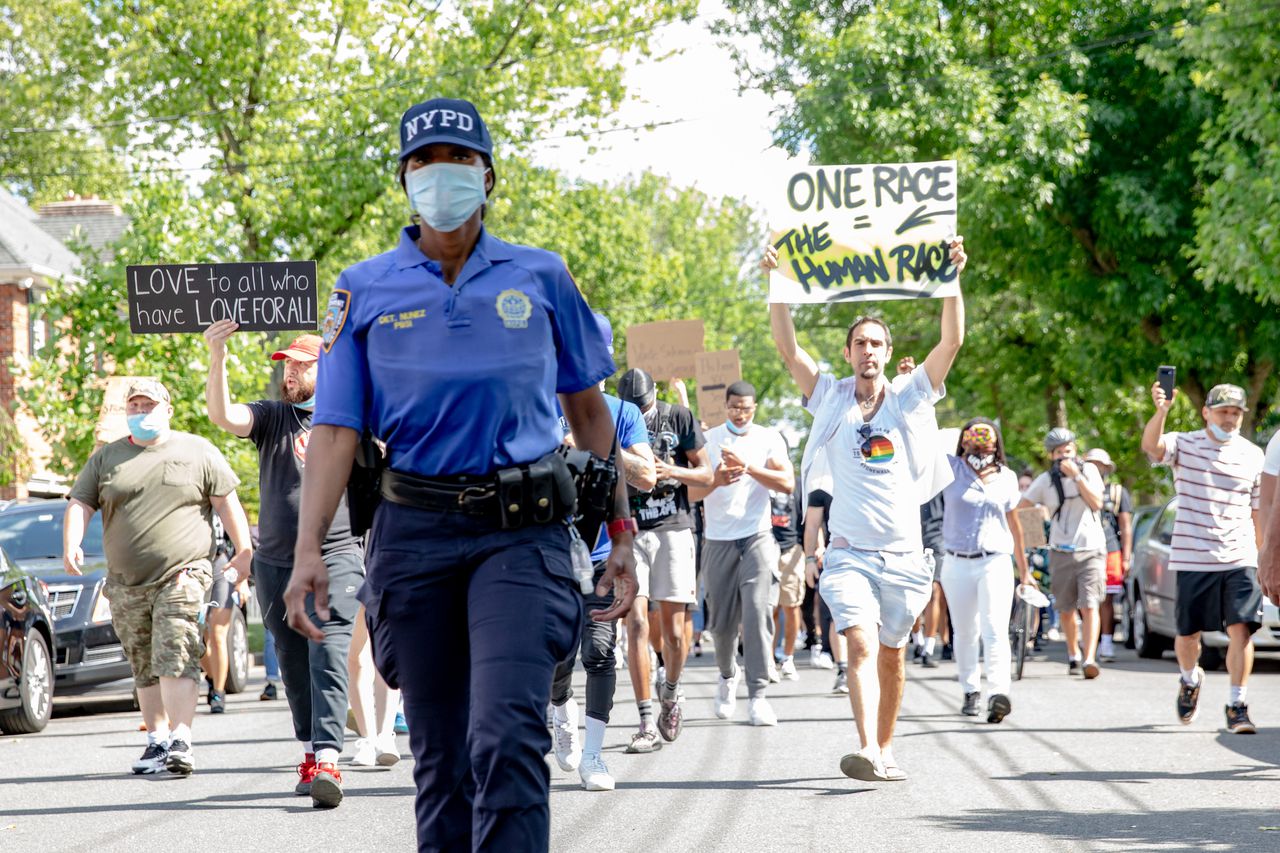 Police escorted the over a thousand people from Conference House Park to the 123rd Precinct as they continue protesting in the name of George Floyd. June 7, 2020. (Staten Island Advance/Jason Paderon)

STATEN ISLAND, N.Y. -- Elected officials in both the city and state governments continued their push for police reforms Tuesday in response to protests that have swept the country following the death of George Floyd.

So far, none of their actions go as far as defunding or dissolving police departments as some activists have called for, but do take steps aimed at increased accountability and reduced use of force.

Gov. Andrew Cuomo put his support behind four steps at his Tuesday press briefing, including legislation that reforms a 1976 law that has been used to protect officers’ personnel records, which passed the New York Senate on Tuesday.

Floyd died May 25 after Minneapolis police officer Derek Chauvin kneeled on his neck for nearly nine minutes as Floyd said repeatedly that he could not breathe. Chauvin, and three other officers who did not intervene, have been charged in relation to Floyd’s death.

His final words recalled the 2014 death of Eric Garner in Tompkinsville, who told officers 11 times that he could not breathe as they attempted to take him into custody. On Monday, the New York Assembly and Senate passed a bill named for Garner that made officer chokeholds a felony except when their lives are determined to be in danger.

Cuomo has also voiced support for that bill, but he has yet to sign it into law. Both houses of the state legislature have passed reforms related to policing, including that require officers to report when they discharge a firearm.

Other pieces of legislation passed Monday include requirements for law enforcement to file reports on those who die in custody while being held on low-level offenses, and one not related to police that further criminalizes hate-based 911 calls.

Meanwhile, City Councilwoman Debi Rose (D-North Shore) took to social media on Tuesday to announce that the council’s Committee on Public Safety would hear testimony that would make chokeholds illegal in the city.

Most state police departments, including the NYPD, have banned the use of chokeholds, but Rose said more needs to be done.

“The passage of this legislation is very personal for me, as I hear the echoes of Eric Garner’s voice, 11 times saying ‘I can’t breathe’ as Officer (Daniel) Pantaleo choked Eric Garner to death, a blatant violation of NYPD’s officers’ Patrol Guide,” she said.

“Eric Garner’s death proved that it is not enough that the NYPD prohibits deadly chokeholds. History has shown us that violations of NYPD rules result in little or no discipline for officers,” she continued.

A grand jury declined to indict Pantaleo immediately following Garner’s death, and it took the NYPD five years to fire the officer in August 2019. The only other officer to face consequences in relation to Garner’s death was Sgt. Kizzy Adonis for failure to supervise. The department took 20 of her vacation days after she pleaded guilty.

In addition to the ban on chokeholds, Mayor Bill de Blasio said Tuesday that he supported city legislation that would call for early intervention with problem officers, require officers to display ranks and shield numbers, and codify citizens’ right to record officers in public.

During a Tuesday press conference led by the city Police Benevolent Association, PBA President Pat Lynch railed against moves by lawmakers to reform police departments, but reiterated the union’s position against the officers’ actions in Floyd’s death.

Lynch also raised concerns about a return to the high-crime era of the 1980s and 90s -- a concern he’s often voiced during his six terms as PBA president, despite a 20-year decline in crime over two mayoral administrations.

De Blasio’s administration has made attempts to reform the NYPD with an increased focus on community policing and a reduction in the stop and frisk tactics championed by the previous mayor, Michael Bloomberg, before his failed 2020 presidential run.

The current administration also started a new interpretation of the law -- commonly known as 50-a -- that, in part, necessitated the reforms the state Senate passed Tuesday after the city blocked access to disciplinary records of the nation’s largest municipal police force. Previously, the public had access to such records.

State Sen. Diane Savino (D-North Shore) co-sponsored the bill reforming 50-a, and said it was important to reform the legislation rather than just repeal it. In addition to police officers, the law covers the records of government employees like firefighters and correction officers.

In negotiations, Savino said legislators secured protections for certain personnel records like medical records, and blocked the release of information like addresses and social security numbers, while allowing public access to disciplinary records through Freedom of Information Law requests.

The version of the bill expected to pass the New York Assembly later on Tuesday was a full repeal of the bill, and did not include those protections.

The Assembly and Senate will have to finalize the legislation before it can move on to the Governor’s desk to be signed into law.

Staten Island Republican Party Chairman Brendan Lantry criticized efforts to reform the state’s police departments, and said the moves would make it easier for criminals to walk the streets.

“The message (to) voters this November is clear: the Democratic Party is handcuffing police, calling for them to be defunded and allowing unsubstantiated claims against our men and women in blue to be used in court to hinder prosecutions,” he said.

Assemblyman Michael Cusick leant his support to the reform of 50-a, but expressed his desire to keep unsubstantiated claims private. Savino said during testimony that she hoped to introduce additional legislation to have exonerated cases expunged from officers’ records.