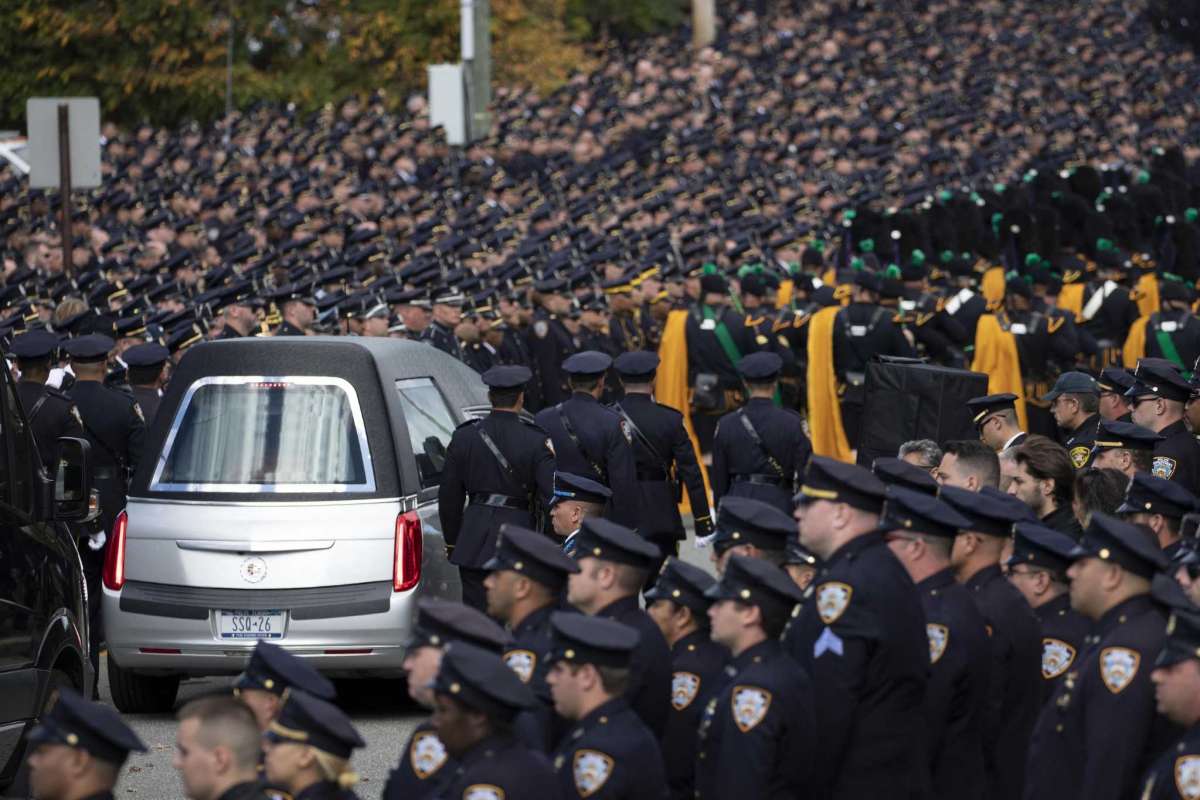 Thousands of police officers line a street in Monroe, N.Y. as the hearse bearing police officer Brian Mulkeen leaves the Church of the Sacred Heart, Friday, Oct. 4, 2019. Officer Mulkeen was fatally struck by two police bullets while struggling with an armed man after chasing and shooting at him Sunday in the Bronx borough of New York. It was the second time this year a New York City police officer has been killed by friendly fire. (AP Photo/Mark Lennihan) 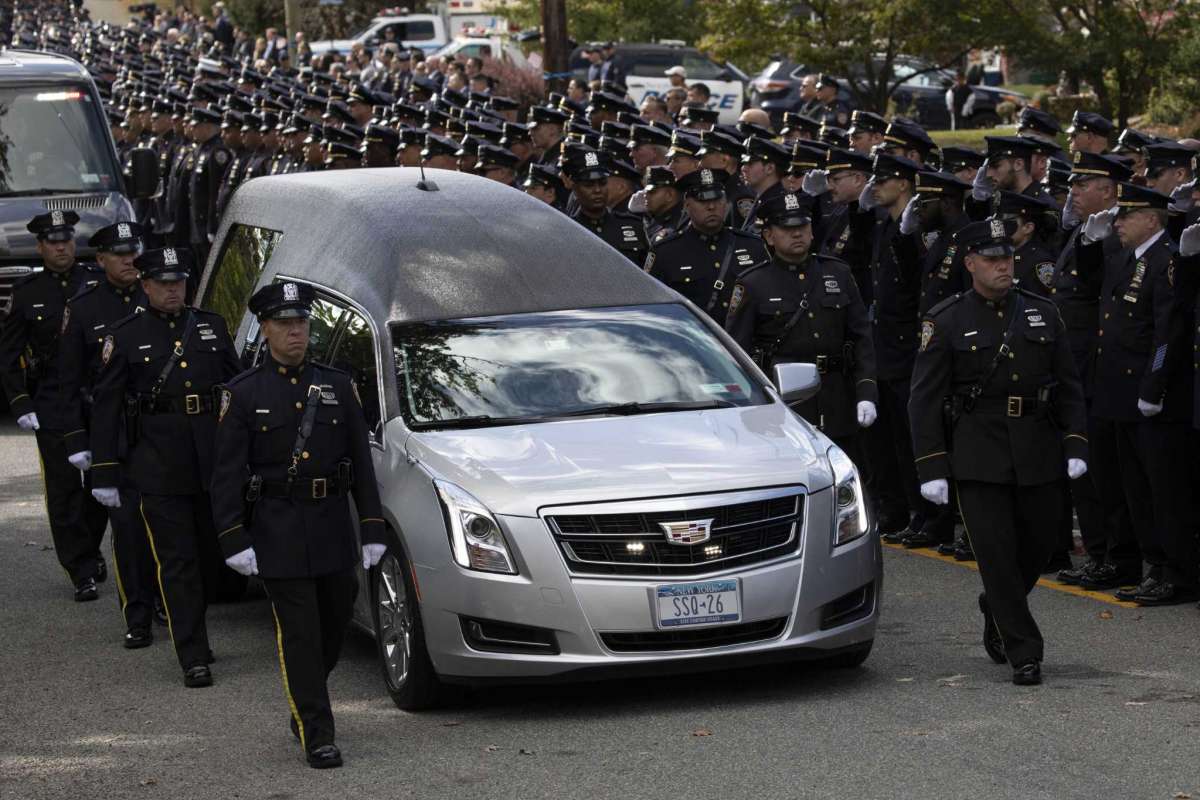 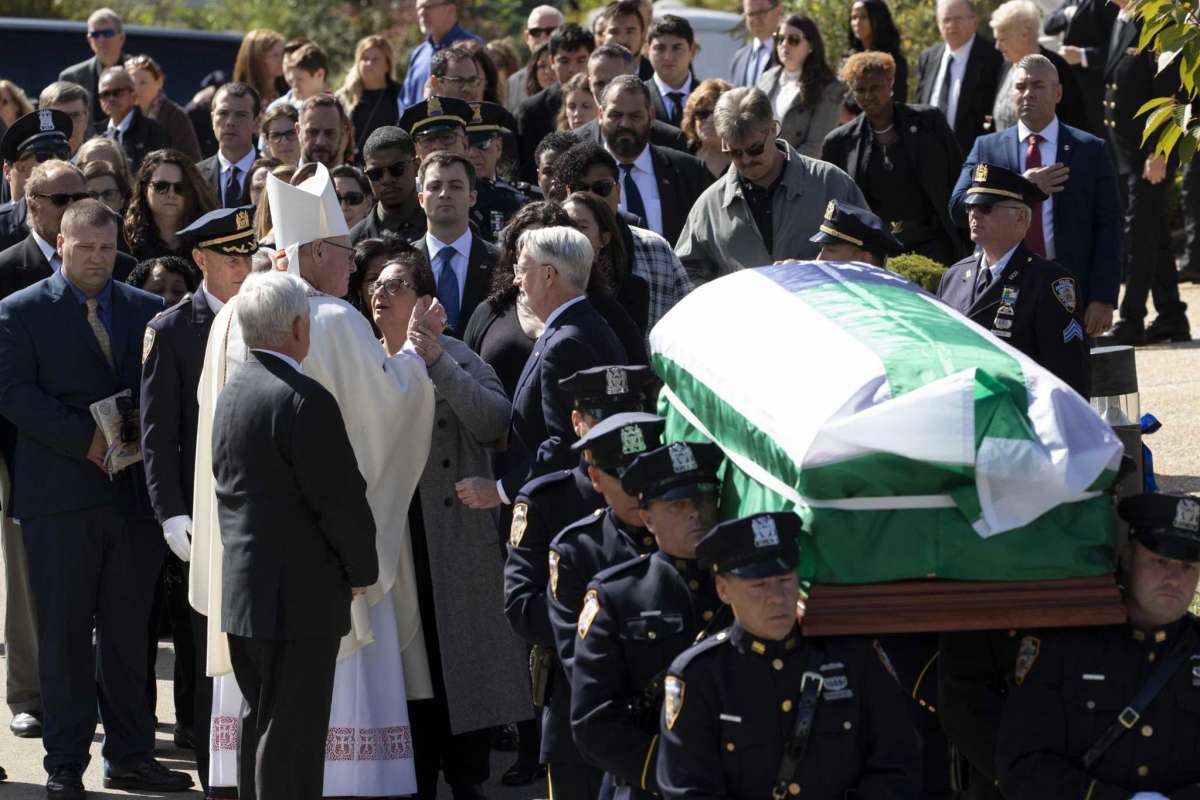 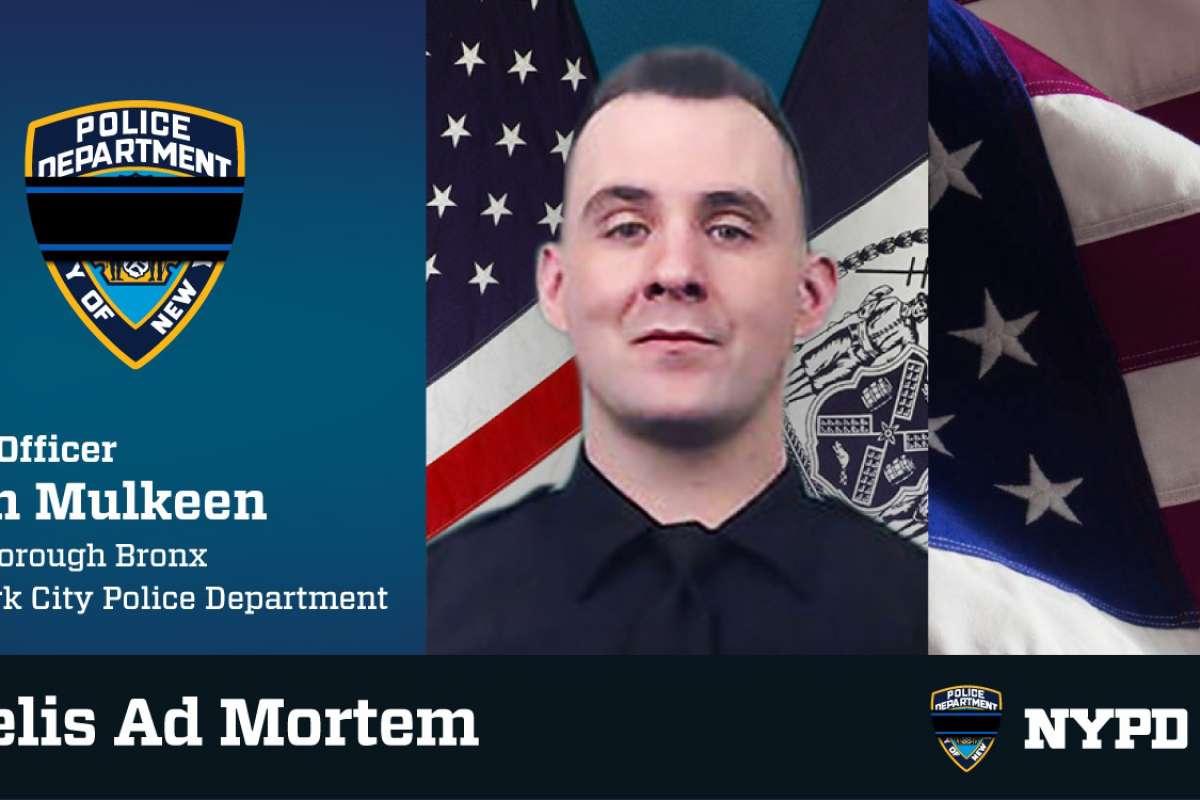 Monroe: With bagpipers marching silently to the beat of a somber drum, a New York City police officer killed by friendly fire was honored at his funeral Friday as a hero and a dedicated, compassionate professional who put his heart into his work.

Officer Brian Mulkeen, who was hit Sunday by two police bullets while tussling with an armed man in the Bronx, was the second New York City officer killed by friendly fire this year.

"We are here to honor a hero" and "celebrate the life of an absolutely remarkable man," said Police Commissioner James P. O'Neill, who choked back emotion as he addressed mourners.

Mulkeen "understood that his work required his whole heart and all the compassion that was in him," Mayor Bill de Blasio said. The officer, for instance, kept in touch with a teen he had arrested, inviting him to play basketball.

"He undoubtedly changed the direction of that young man's life," said de Blasio, adding that the family was "devastated" by Mulkeen's death, "as if they'd lost a family member too."

Mulkeen, a graduate of Fordham University's business school, had worked as a financial adviser for Merrill Lynch from 2007 to 2009 but left and pursued a life of public service.

"He could have taken an easier path. That wasn't Brian," de Blasio said. "He wanted to be at the front line. He wanted to protect people."

Even the night before his death, the mayor said, the 33-year-old officer made an arrest and took a gun off the street.

Hundreds, if not thousands, of officers in their dark blues flooded the street outside the Church of the Sacred Heart in Monroe, north of New York City.

Amid the hum of bagpipes, they crisply saluted as Mulkeen's flag-draped casket was carried inside the church, which overlooks the hills of Orange County.

He was raised in Monroe and graduated from high school just miles from the church, according to an obituary.

Mulkeen, who joined the department in January 2013, was working with a plainclothes unit when he and his partners encountered the armed man.

The man fled on foot, and officers chased him. Mulkeen and the man started to wrestle.

Police have described a chaotic confrontation in which 15 shots were fired in 10 seconds by six officers. Deputy Chief Kevin Maloney said five of those shots came from Mulkeen after the armed man reached toward his waistband.

The armed man was also killed in the gunfire.

Mulkeen, the grandson of a New York City police officer, has been posthumously promoted to detective first grade, O'Neill announced.

Only one person was responsible for Mulkeen's death, O'Neill said at the funeral: the man who carried a "loaded and illegal gun and decided to run from police."

The police commissioner highlighted Mulkeen's work fighting violent activity and taking guns off the street, saying it was his job to go after the most violent and dangerous people in the city.