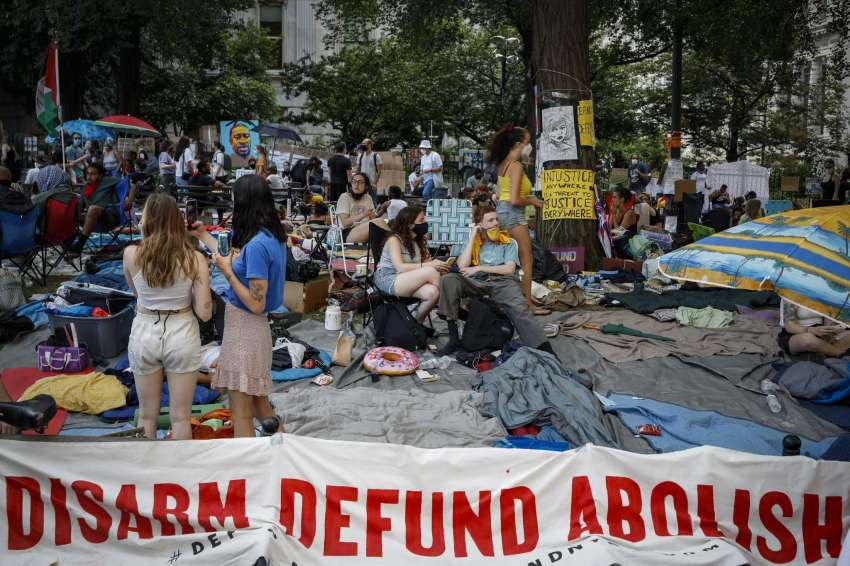 Protesters occupy an encampment outside City Hall beside signs calling for the defunding of police, Friday, June 26, 2020, in New York.John Minchillo/AP

NEW YORK (AP) — A week after a “defund the police” protest became a full-blown occupation outside City Hall, Mayor Bill de Blasio announced Monday he has a plan for the New York City police department budget to be slashed by $1 billion.

The mayor, a Democrat, declined to discuss the sources of what he called “savings” for the nation’s largest police department, saying at a news briefing that the cuts are still being negotiated with the City Council. But he said spending on capital projects would be reduced by $500 million and there could be changes to the department’s role in policing schools.

Money would be deferred to the city's chronically underfunded public housing system and to youth programs, de Blasio said.

“The NYPD did a hell a good job in saying, ’Ok, here’s a bunch of things we could do while still keeping this city safe,” he said. “We need to redistribute revenue to communities that need it the most. We know our young people are hurting.”

The budget talks come as hundreds of demonstrators have spent the past week camped out in City Hall Park and demanding police defunding following weeks of protests over the death of George Floyd and other Black Americans killed by law enforcement.

Organizers have called it “Occupy City Hall” — a nod to the 2011 Occupy Wall Street movement a few blocks away in Zuccotti Park.

The group directed its demands — scrawled on colorful placards, a canvass of graffiti and a massive poster taped over a subway entrance — at de Blasio and Council Speaker Corey Johnson.

“We’ve done different levels of escalation to make sure we’re getting their attention,” said Jonathan Lykes, one of the movement’s organizers. “If they defund the police by $1 billion then we have won — but that’s only our demand this week.”

The occupation has drawn protesters barely old enough to vote but also veteran activists like Debbie Williams, of Brooklyn, who described the movement as unlike any she’s seen.

“People’s eyes are opened now,” said Williams, who slept at the site Sunday and was cooling off Monday in a furnished area dubbed the “Chill Zone.”

The idea of slashing the NYPD's budget, now around $6 billion annually for operations plus several billion dollars more in shared city expenses, like pensions, seemed politically laughable even a year ago. Memories of the Sept. 11 attacks and the high-crime decades of the 1970s, 1980s and early 1990s were too fresh.

But now, city agencies across the board are dealing with the possibility of big cuts due to a huge loss in revenue caused by coronavirus shutdowns. The NYPD has about 36,000 officers. Asked if that number will hold, de Blasio responded: “Whatever we do in terms of headcount has to keep the city safe.”

Patrick Lynch, head of the Police Benevolent Association union, said the proposed cuts will lead to fewer cops on the streets amid a spike in shootings that has lasted several weeks.

“We will say it again: the Mayor and the City Council have surrendered the city to lawlessness. Things won’t improve until New Yorkers hold them responsible,” Lynch said in written statement.

The City Hall Park occupation was organized by Black and LGBT activists but has sought to include input across the ideological spectrum. A makeshift “People's Library,” assembled under a tent, promotes “radical literature.”

A nearby “bodega” features free donated food and personal protective equipment to occupiers, many of whom are wearing masks. Speakers announced “de-arrest training” sessions and reinforced the expectation that residents of the space look after one another.

“We want racial injustice to end, and the means is that we stay here right now in this space,” said Manny, who addressed the crowd but declined to give his last name. “It’s very clear that people want to stay past Tuesday and that people want to see police and prison abolition.”

Gatherings of more than 10 people are still banned in New York City because of the coronavirus, but those rules have been ignored by protesters for weeks and police have not moved to enforce them.

Lykes said the occupation has made the NYPD “nervous,” recalling a string of minor confrontations that were resolved without arrests. He differentiated the peaceful assembly in Lower Manhattan from a weeks-old occupation in Seattle that has seen episodes of violence.

“We have an uprising and one of the largest we’ve seen since the death of Martin Luther King,” he said. “These are the worst of times but the best of times as far as an opportunity to change.”