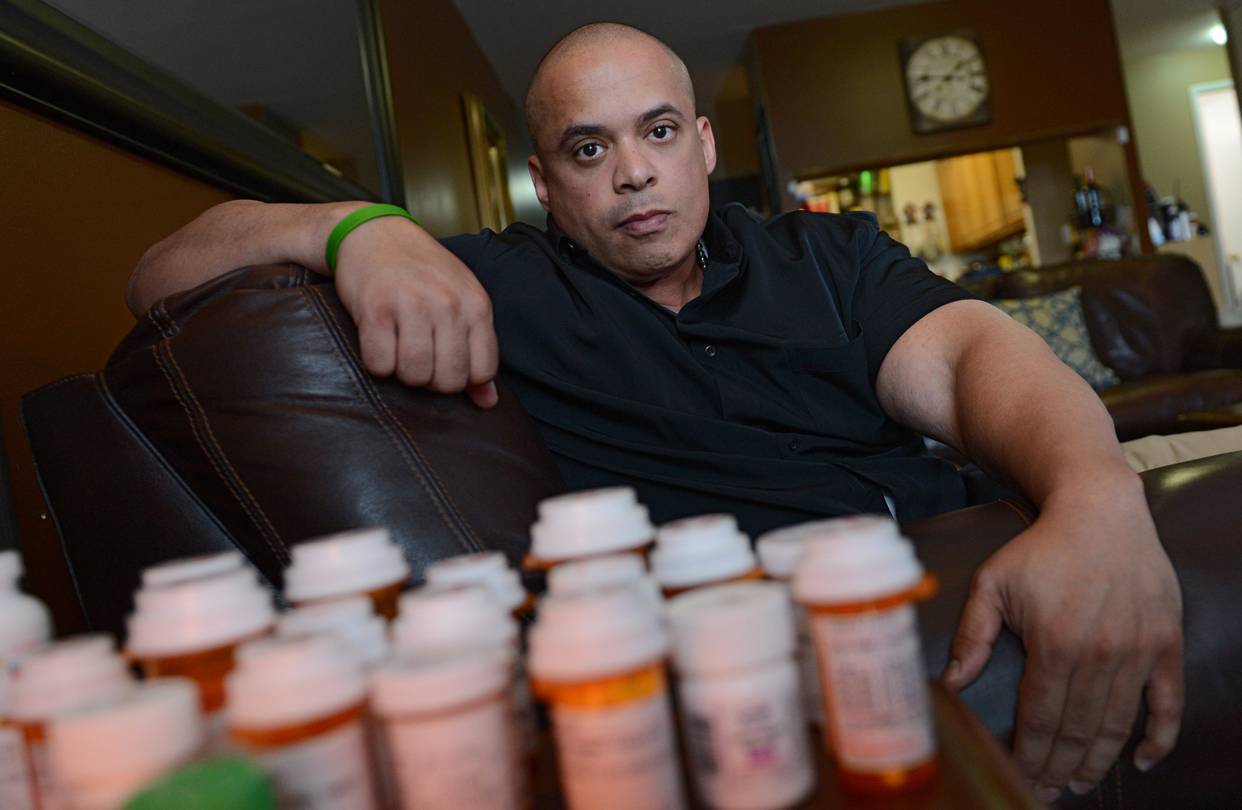 Owen Ortiz with the bottles of medications he has had to take during his cancer ordeal. Mr. Ortiz was working as a school-safety agent on 9/11 during the attacks on New York City. PHOTO: ENID ALVAREZ FOR THE WALL STREET JOURNAL

n the 16 years since the Sept. 11, 2001, terrorist attacks, Sal Turturici has watched as friends he worked with at the World Trade Center site fell ill. Now Mr. Turturici is sick too, battling stage 4 neuroendocrine cancer that doctors believe could be linked to his service on an FDNY medical team at the site.

Though researchers say it could take decades to prove a clear link between time spent at Ground Zero and illnesses, they say it appears that toxins at the site heightened the occurrence of certain diseases.

Mr. Turturici, 52 years old, is one of thousands of firefighters, police officers, EMTs, journalists and others who worked and lived near the World Trade Center who say they are becoming sick after breathing in toxic air in the days and months after the attacks.

In recent years, some doctors working with 9/11 first responders and other survivors say they believe the rate of cancer among those who were at Ground Zero is rising.

Michael Crane, who runs a treatment and monitoring center financed by the federally funded World Trade Center Health Program at Mount Sinai Health System, said the rate of 9/11-related cancers he sees has risen in recent years, to more than 15 new cases a week, up from about 10 a week two years ago. “It’s been building steadily,” Dr. Crane said in an interview. “I am very concerned.”

Dr. Crane said more research was needed to determine whether the increase was caused by exposure to 9/11 toxins and not simply age.

Several studies have shown a possible link between exposure to the World Trade Center site and cancer. One 2011 study by the head doctor for the Fire Department of the City of New York found that firefighters who worked at Ground Zero are 19% more likely to have cancer than their peers. That report found an increase in the sum total of cancers among first responders, though researchers, citing the relatively small numbers involved, were hesitant to point to a higher incidence of any specific cancers.

Of the nearly 80,000 people enrolled in the World Trade Center Health Program, the federal initiative, about 7,000 have cancers that could be linked to 9/11, Dr. Crane said. About 68,000 people in the program are first responders.

City officials have estimated that up to 400,000 people breathed in the toxic air that hovered over lower Manhattan in the months after the Sept. 11 attacks. Anyone who lived, worked or went to school in the area at the time should be regularly screened for illnesses, Dr. Crane said.

Owen Ortiz, 41, a first responder on 9/11, was diagnosed with carcinoma in 2012. Mr. Ortiz said that while he sometimes talks with his young daughter about his experience on Sept. 11, cancer has brought the trauma home.

“I tell her about 9/11, about the buildings falling,” he said. “But with the cancer, she saw me diminish little by little up close.”

The deaths and illnesses have hit the city’s fire and police departments especially hard.

At the FDNY 159 people have died of diseases, mostly cancers, that could be tied to 9/11, according to city officials,

At the New York Police Department, 132 people had died as of December 2016, according to the most recent available data. That figure doesn’t include Kelly Korchak, 38, a police officer who died of cancer thought to be linked to her 9/11 exposure in June, six months after giving birth.

“She never got to be a mother. She couldn’t hold him, she couldn’t bathe him, she won’t be around for his first birthday,” said Steven Attarian, Ms. Korchak’s widower. “You live with the pain constantly.”