Body cameras to be worn by all patrolling officers by end of year, mayor says 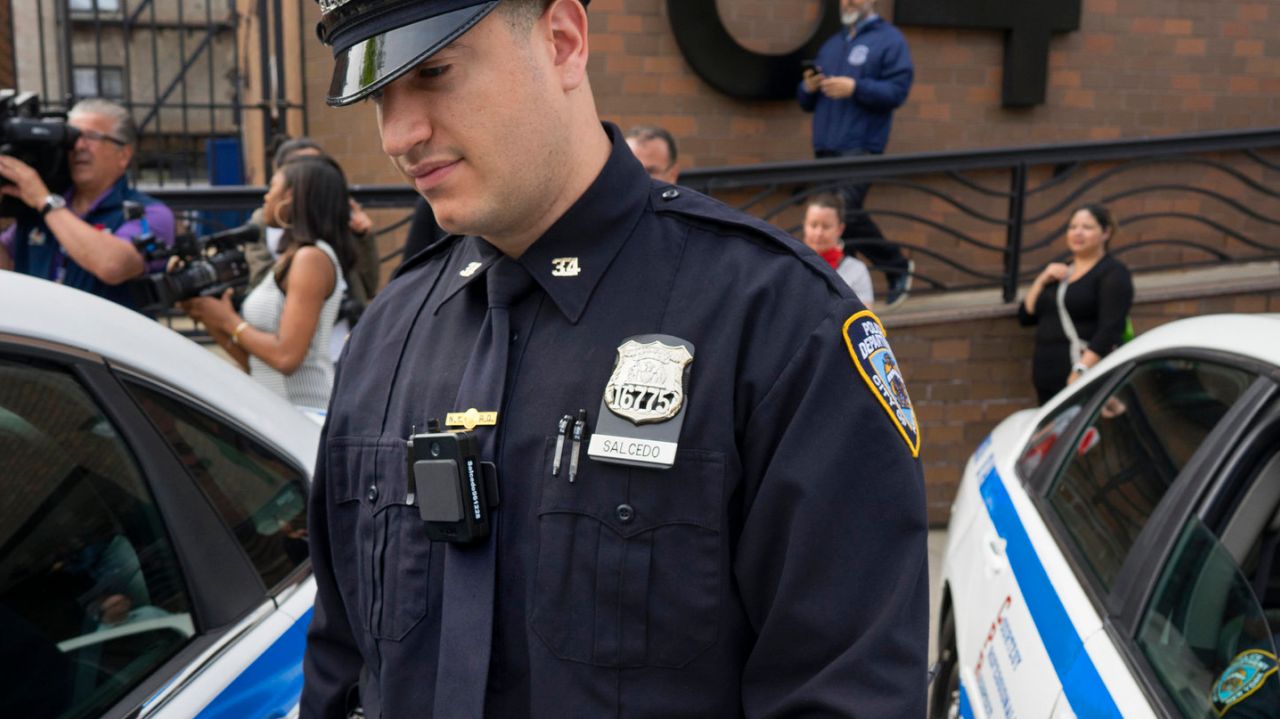 An NYPD officer with the 34th Precinct in Washington Heights wears a body camera. The NYPD said on Tuesday, Jan. 30, 2018, the department will equip nearly 18,000 cops with the devices by the end of 2018. (Credit: Craig Ruttle)

The NYPD is accelerating its body camera program and will outfit nearly 18,000 patrol cops with the devices by the end of 2018, a full year ahead of the original schedule, city officials said Tuesday.

At a news conference at the 79th Precinct in Brooklyn, Mayor Bill de Blasio, Police Commissioner James P. O’Neill and other officials said money for fast tracking the body camera program will be part of the preliminary budget scheduled to be announced on Thursday.

De Blasio couldn’t give an exact dollar amount on the cost but indicated the money had been appropriated.

The city already has about 1,453 officers using body cameras as part of a pilot program supervised by a federal court monitor. The pilot program began in April 2017 and is used in 20 police commands.

De Blasio and O’Neill agreed the time was ripe to speed things up while acknowledging that unresolved issues remain about how the cameras are used and whether the Patrolmen’s Benevolent Association will be onboard with the plan.

The union, which represents rank and file police officers and has opposed the use of body cameras, has taken legal action to stop the NYPD from selectively releasing videos of officer-involved shootings.

De Blasio said “body cameras change lives for the better right now. We want people to start experiencing that right away.” The mayor added “it is also better for our officers to get a clear definitive record of what happens in any encounter.”

Aside from three officer-involved shootings in recent months, the NYPD has released only a few video images captured by body cameras. Police officials said that aside from documenting questionable encounters, the videos are useful for training and corrective action.

While de Blasio, O’Neill and other officials believe body cameras will go a long way toward building trust between cops and the communities they serve, there is still little empirical evidence about their effectiveness in the city.

The current pilot project will eventually lead to the release of a study revealing certain metrics used by a special court-appointed monitor to study the program, said First Deputy Commissioner Benjamin Tucker.

Both the mayor and police commissioner made it clear Tuesday they believe body cameras are the future of policing and the benefits outweigh any problems.

The accelerated rollout plan received guarded support from the New York Civil Liberties Union. In a statement, the NYCLU said the rollout “has the potential to enhance accountability, but only if the footage is made public, with faces of civilians blurred to protect their privacy.”

The nonprofit Communities United for Police Reform criticized the plan in a statement, saying studies don’t support the claim that cameras have helped with police accountability and transparency.

The group also said current NYPD policies don’t assure the public the department will be able to review police actions caught on camera. NYPD officials have admitted that the various policies related to the cameras — such as when to publicly disclose their contents — are evolving in what, for the department, is uncharted territory.

“It makes no sense to accelerate the program while there are so many unresolved issues regarding the use of bodycams, including the very basic question of whether they actually produce a meaningful change in the interaction between police officers and civilians," said PBA president Patrick Lynch in a statement.