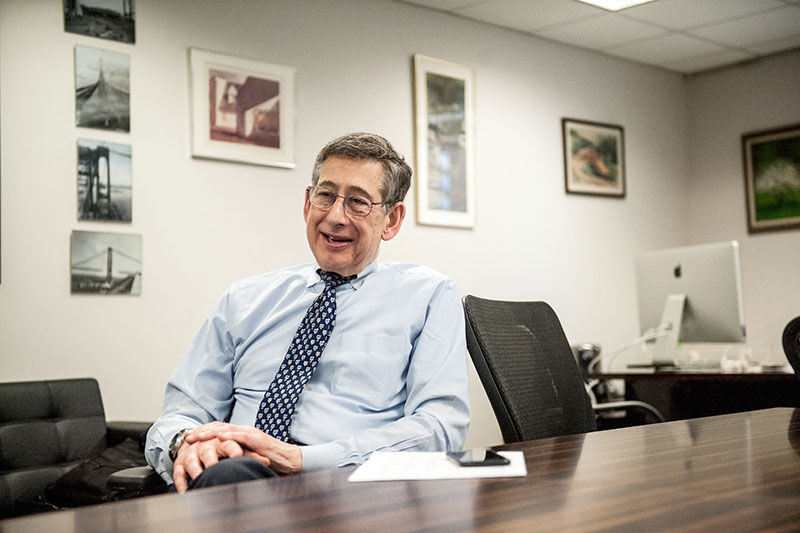 ‘WE PAY WITHIN THE MAINSTREAM’: City Labor Commissioner Robert W. Linn said that notwithstanding the furor caused by Mr. de Blasio chalking up the big gap in pay between Emergency Medical Service workers and Firefighters to their work being ‘different,’ the remark reflected the fact that total compensation for EMS staff in many cases is superior to what is received by people performing the same tasks for private hospitals. The Chief-Leader/Rebecca White.

Even as anger continued to ripple through the ranks of Emergency Medical Service workers and their unions over Mayor de Blasio’s remark last month that they were paid significantly less than firefighters because “the work is different,” Labor Commissioner Robert W. Linn said Feb. 6 that the gulf between the two jobs was justified based on what private-sector EMS workers are paid.

“The Mayor got it right,” Mr. Linn said during an interview in the office that he will vacate Feb. 15, with his successor, Renee Campion, alongside him. “The work is different.”

It has long rankled EMS workers that their maximum salary is significantly below that of other first-responders like firefighters and police officers because they believe the dangers posed by those jobs, while different from what they face, are no greater than the risks they encounter handling patients with infectious diseases or as targets for robberies because of the medication they carry in their ambulances.

The death of a veteran Emergency Medical Technician, Yadira Arroyo, two years ago after a man with an extensive criminal record and a history of schizophrenia seized control of her vehicle and fatally struck her with it served as a rallying cry for her union, Local 2507 of District Council 37, to narrow the pay gap of roughly $35,000 that exists between maximum salary for EMTs and what Firefighters receive.

Mr. Linn said that the danger involved in a job is not the prime criterion for setting salaries. Far-greater factors, he said, were matters pertaining to whether the city could attract qualified candidates at a certain salary level, a determination that could more easily be made by comparing city EMTs to their private-sector counterparts because of the similarities in their duties.

“The first thing you have to do,” he said, “is make sure you can hire and retain. If you can’t do that, you’ve got a problem.”

Cases like that involving Nurses and Teachers cropped up during the 1980s when he was then-Mayor Ed Koch’s Labor Relations Director, with the situation so severe among the former group that “we couldn’t recruit a class of nurses” and were making special outreach efforts to the Philippines. The Koch administration wound up offering pay raises above the city pattern for both those occupational groups until its recruitment and retention problems were alleviated.

“My hierarchy in life,” Mr. Linn said, “is that until proven otherwise, pattern bargaining should apply. But I am a believer that if you can’t hire and you can’t retain, that is where you make an exception.”

EMS union leaders argue that the disparity in top pay between EMTs and Firefighters is responsible for a turnover rate that gets as high as 30 percent, abetted by the Fire Department giving EMTs hiring preference for Firefighter jobs by allowing them to take a promotion exam whose resulting list is given priority over the one administered on an open-competitive basis.

Mr. Linn countered that despite the movement of EMTs into firefighting at the first opportunity to come off the promotion list, EMS has not had a problem finding replacements—although the unions point to studies showing that the more-experienced EMTs are, the greater the likelihood that they will save patients’ lives before they arrive at a hospital.

To illustrate, he pointed to compensation levels for city EMTs and their counterparts in private hospitals, whose compensation he grew familiar with in his private labor practice while serving as outside counsel to the League of Voluntary Hospitals, in between stints as the city’s chief negotiator.

Local 2507 and Local 3621 of DC 37, which represents EMS officers, opted to negotiate separately from their parent union—which reached a new contract last June—in this round of bargaining, which means their members are working under a contract that expired in March 2017. Mr. Linn said that EMTs employed by several private hospitals in Manhattan are also working under deals that ended two years ago, creating a level field for comparisons.

A city EMT with 10 years on the job, he said, receives $55 an hour in wages and fringe benefits, while an EMT with similar experience at St. Luke’s-Roosevelt gets slightly more than $50 an hour in total compensation. For EMTs with 20 years’ experience, the gap widens in favor of those under the Fire Department umbrella, because they receive an additional salary increment that brings their total compensation to $57 hourly, while no such increment exists for those working for St. Luke’s.

For Paramedics, who are at the second level for EMTs, Mr. Linn said a 10-year veteran employed by the city receives total hourly compensation of $66.50, which is $3 more than what their counterparts at Columbia-Presbyterian Hospital receive and nearly $10 above what Paramedics at St. Luke’s get in wages and fringe benefits.

He was not surprised at the discontent among EMTs who work in close proximity to firefighters and cops, sometimes at the same locations for incidents where all those employees may respond, particularly because EMTs are aware of the big jump in salary that results from a promotion to Firefighter.

But that feeling of being shortchanged is not uncommon among most groups of municipal workers, and perhaps the most-vivid example involves Police Officers, despite the fact that at top pay they earn slightly more than Firefighters and significantly more than EMTs. For much of the de Blasio administration, protests of the city’s bargaining position organized by Police Benevolent Association President Patrick J. Lynch have been common at appearances by Mayor de Blasio, including during some of his out-of-town trips.

Mr. Linn said, “Everyone we talk to, 150 bargaining units, I haven’t found one that comes in and says, ‘Thank you for paying us the reasonable, responsible salary we deserve.’ Everyone comes in wanting more.”

Calls to a spokesman for the EMS unions seeking a response to Mr. Linn’s comments and data did not produce a response by presstime.