But Discipline, 'Residency' Iffy in Albany 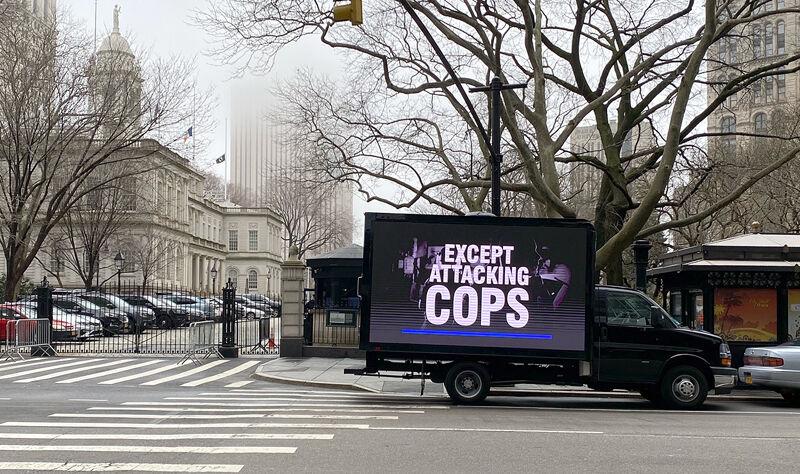 UNITED IN OPPOSITION: The coalition of five NYPD unions conveyed its disapproval of the City Council’s slate of police-reform legislation via an electronic billboard on the sides of a van parked outside City Hall March 25 as the Council voted, remotely, on a slew of bills and resolutions some members said were but a preface to further reform efforts. The van’s billboard displayed the number of shootings so far this year, which were 40 percent higher through March 21 compared to the same period last year. The corresponding message reads: 'What is the City Council doing? Nothing. Except attacking cops. Shame on the City Council.' Photo courtesy of NYPD.

The City Council’s liberal and progressive wings, while critical of Mayor de Blasio’s policing-reform plan for what they said was its lack of gravitas and its tardy presentation, nevertheless voted March 25 to ratify the initiative but pledged to build on the effort in the coming years.

But the Council also approved a package of legislation—its own—designed to rethink and reshape the NYPD in significant ways. It did so chiefly by passing a bill that ends qualified immunity for officers and by approving resolutions supporting state legislation that would strip final authority regarding discipline of officers from the Police Commissioner and require cops to live within the five boroughs.

The Council’s left-leaning members chastised the Mayor for giving them less than two weeks to consider and approve his draft plan, which is essentially the administration’s response to an executive order issued by Governor Cuomo last year directing municipalities to adopt policing-reform road maps by April 1 or risk losing billions of dollars in state and Federal pass-through funding.

Both Public Safety Committee Chair Adrienne Adams and Speaker Corey Johnson noted that the Council nevertheless made significant changes to the plan, including by adding roughly $70 million of what they termed alternatives to policing and incarceration.

“But I’m not going to celebrate this plan,” Ms. Adams said during her committee’s meeting earlier in the day. She said that much more needed to be done if, in what has become something of a mantra for the Council’s progressive wing, it is to reduce the NYPD’s footprint.

“Rest assured, this is only the floor and not the ceiling,” she said. “The City Council will build on these changes. This is the beginning of reform, not the end.”

Police unions, though, ripped Council Members for their naivete as violent crime continues to trend upward.

“New Yorkers are getting shot, and police officers are on the streets day and night, trying to stop the bloodshed,” the Police Benevolent Association’s president, Patrick J. Lynch said in a statement. “Where are those City Council members? Safe at home, hiding behind their screens and dreaming up new ways to give criminals a free pass. It won’t get better unless New Yorkers shame the politicians into doing their job.”

The coalition of five cop unions otherwise conveyed its message via an electronic billboard on the sides of a van parked outside City Hall that displayed the number of shootings so far this year, which had climbed nearly 40 percent through March 21 compared to the same period last year.

Paul DiGiacomo, the president of the Detectives Endowment Association, predicted that the Council’s actions would compromise residents’ safety.

“Once again, the City Council is trying to pull the wool over the eyes of the public by passing more laws in the name of so-called police reform,” he said in a statement distributed by the coalition. “But the outcome will be more of the same—skyrocketing violence in the neighborhoods that need the police the most.”

Civil-liberties and advocacy organizations, however, said the reforms, particularly those contained in the Mayor’s plan, did not go far enough to ensure that over-policing, particularly within black and brown communities, would ebb once and for all.

Tina Luongo, the Legal Aid Society’s attorney-in-charge of the Criminal Defense Practice, called the Mayor’s plan a lost opportunity “that at best glosses over the deeply rooted systemic problems within the NYPD.”

“We need to move beyond this failed process, listen to the demands of impacted communities for investment in non-police resources for improving public safety, and acknowledge that true change cannot be built on ‘reforms’ that entirely fail to address the underlying and long-standing problems,” she added.

Still, the Council’s initiatives could have a transformative effect on the nation’s largest police department.

It banned qualified-immunity defenses for NYPD officers by “creating a right of security against unreasonable searches and seizures,” effectively allowing residents recourse through the courts.

Proponents of the new law argued that qualified immunity doctrines too often shielded officers who might have otherwise been found to have overstepped their authority. The law, they said, will help hold officers accountable for their actions.

In introducing the legislation at the Council’s pre-stated meeting, Mr. Johnson and Councilman Stephen Levin recounted the early 1960s-era Mississippi Freedom Riders incident that precipitated the Supreme Court’s 1967 ruling that essentially established the doctrine. “Qualified Immunity...denied those Freedom Riders justice, and it’s been used to deny justice to victims of police abuse for decades," the Speaker said.

Mr. Levin said the Council’s bill if enacted would clear local hurdles for residents to claim their rights against unconstitutional searches and seizures and fortify their claims to due process.

“An officer would not be able to enter a courtroom and assert that the plaintiff cannot even commence a case against them because they are immune, un-liable and untouchable,” he said.

Efforts to end qualified immunity have also gained traction at the Federal level, although opponents have argued that ending it could lead to hesitation by police officers, particularly when they are obliged to make split-second decisions. Officers, they contend, should be given room to make occasional mistakes.

During a February hearing of the Public Safety Committee, the NYPD’s Executive Director of Strategic Initiatives, Elizabeth Daitz, noted that “qualified immunity is a defense that has very limited applicability on a limited number of Federal claims.”

Robert Quackenbush, a Legal Aid attorney, said the qualified-immunity doctrine fostered a “culture of impunity” within the NYPD. While he called the Council’s action a “solid first step,” he urged state lawmakers to enact a similar statewide measure.

The Council also turned to Albany legislators, supporting resolutions that would transfer final authority regarding discipline of officers facing resident complaints from the Commissioner to the Civilian Complaint Review Board, and require new NYPD officers to live within the five boroughs.

The latter resolution’s author, Councilman Franciso Moya, said the requirement would enable police officers to integrate “in the communities that they patrol” and create more accountability.

“If police officers know their neighbors and the issues in the neighborhood, it opens a path to create trust and the relationships within the community,” he said at the Committee meeting.

The PBA has long opposed a city residency requirement, saying that a Police Officer’s starting salary cannot meet the expense of living here.

Regardless, neither of those reforms is likely to be included in any state resolution on a budget that is due April 1, according to Assemblyman Peter J. Abbate Jr. who chairs the Governmental Employees Committee. He said that legislators this year are focused on the state's fiscal picture.