Fed Up With Lawmakers' Excuses, Cop Unions Take to the Airwaves 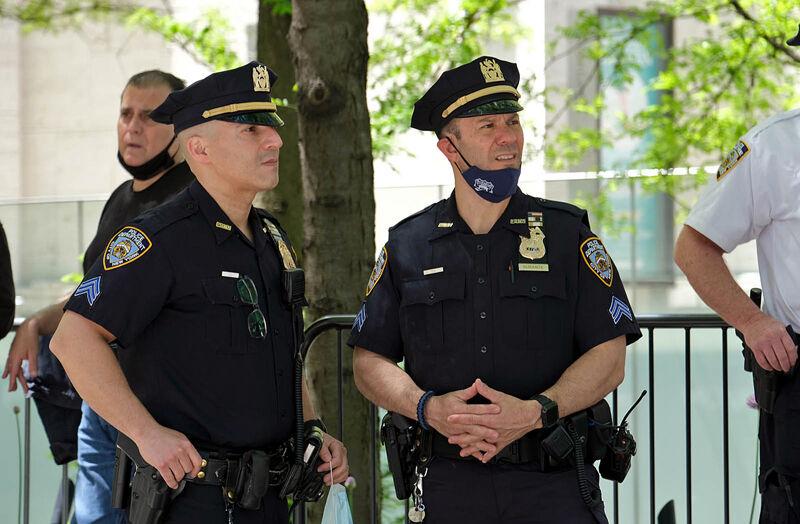 CALLING ALL UNITS: The city’s five police unions are airing radio ads that call for elected officials and, in one case, NYPD brass to heed their proposed solutions so as to address the rise in crime. Police work, the 60-second spots say, is being shackled by ill-considered criminal-justice reforms, a thinned-out department, anti-cop rhetoric and an over-reliance on technology. The Chief-Leader/Michel Friang

There are no more excuses when it comes to crime.

That’s the message the city’s five police unions are transmitting via a series of radio ads. In five spots, they castigate lawmakers—and in one instance, NYPD brass—for undermining cops and, they claim, their inability to hold criminals accountable.

In 60-second spots that began airing May 17 on WABC-770, the union leaders reproach elected officials for passing poorly thought-out criminal-justice reforms they say have at the very least contributed to the citywide spikes in shootings and killings.

“Crime has been skyrocketing since New York politicians have passed failing bail-reform laws, and there is no end in sight,” the president of the Detectives’ Endowment Association, Paul DiGiacomo, asserted in one spot.

“Demand that officials correct their wrongs now,” he continues. “We’re doing our job; New York politicians need to do theirs.”

The solution, he continued in portentous tones, was to give judges the discretion to keep those “criminals who are a threat to you” behind bars.

But while judges appeared more inclined to release persons charged with illegal-gun crimes during the pandemic, court data shows that about 72 percent who were charged with second- and third-degree illegal-gun charges were released, virtually all after having to post bail, with the rest kept behind bars.

Still, the ads are likely to reach friendly ears. While the station, which is owned by billionaire grocer and former Republican mayoral hopeful John Catsimatidis’s Red Apple Media, is on the left of the radio dial, its hosts and programming are decidedly to the right of the political spectrum.

Patrick J. Lynch, the president of the Police Benevolent Association, the nation’s largest such union, said that that while it’s obvious even to residents that criminal activity has increased, elected officials appear indifferent.

“We’re doing our jobs,” he intoned about his members. “We’re confronting criminals and making arrests, but the violence keeps rising,” the PBA leader said in that union’s radio spot.

Among the solutions are more and better-paid cops, Mr. Lynch says, adding that the department has  experienced a significant increase in retirements in recent months and is also losing “the best police officers” to better-paying departments.

Despite graduating 847 new cops earlier this month, the department’s headcount—35,205—is near a decade low.

Through May 9, murders were up 27 percent, with 146 people killed so far this year, and shootings had spiked 86 percent, to 451. And while major crime is down about 6 percent for the year, robberies, assaults and car thefts have also climbed in recent weeks.

Police unions and NYPD officials have cited loosened bail laws and a court system constrained by the pandemic as causes for the increases. But research, including an analysis by city officials and data from the NYPD itself, has cast doubt on those correlations.

Regardless, the message from Lou Turco, the president of the Lieutenants Benevolent Association, is that this period is “the most dangerous...our city has seen in decades.” Officers, though, have been handcuffed in trying to enforce laws and combat crime given laws passed at the state and municipal level, he said.

Mr. Turco said city lawmakers, in particular, had hamstrung officers by passing a law that prohibits the use of certain restraints besides chokeholds by NYPD officers during an arrest—or risk arrest themselves.

“Cops are making more gun arrests but elected leaders have made it harder to do that safely and effectively,” he said before calling for the statute’s repeal: “It’s time to talk solutions. Excuses won’t save the city, but we can.”

Although the NYPD said it is making a high number of gun arrests—despite the disbanding last June of the department’s plainclothes anti-crime units, whose chief mission was to find and take illegal guns off city streets—total arrests are down so far this year.

Through May 16, police had made 55,577 arrests, about 7 percent fewer than through the same period last year, when arrests were already down because of the pandemic’s weeks-long partial lockdown, and quite possibly because nearly 20 percent of officers had been be sidelined by the virus by early April last year.

Another of the radio ads, voiced by Captains Endowment Association President Christopher Monahan, whose union represents supervisors from Captains to Deputy Chiefs, tacks differently, suggesting that bosses at 1 Police Plaza have become too dependent on statistics and data, and it's come at the expense of street-level policing.

“No one knows more about neighborhoods than police commanders. They see, feel and understand precinct residents and what they need,” Mr. Monahan, a vociferous critic of the department’s reliance on CompStat for crime-fighting, says in his 60-second spot.

Rather than thinking of residents as data dots on spreadsheets, police need to instead think of them “like New Yorkers,” he says.

“Return authority to commanders and give local officers the discretion to do their jobs,” Captain Monahan adds.

The Sergeants Benevolent Association, on the other hand—and not surprisingly—takes officials to task for disrespecting the uniform—and names names.

“When it comes to keeping our streets safe, words and actions matter,” a voice—curiously, not that of longtime union leader and frequent podcast host Ed Mullins—intones. “Do you hear that, Governor Cuomo, Mayor de Blasio, [City Council] Speaker Corey Johnson and Public Advocate Jumaane Williams?”

“Anti-cop rhetoric” from officials, the ad continues scores “cheap political points.” But the real effect is that “police-community relations are poisoned, the criminals feel empowered.”

The city’s elected leaders, it says, need to step up, with words that matter: “Send a message that you support your cops.”

The ads run through the end of the week.