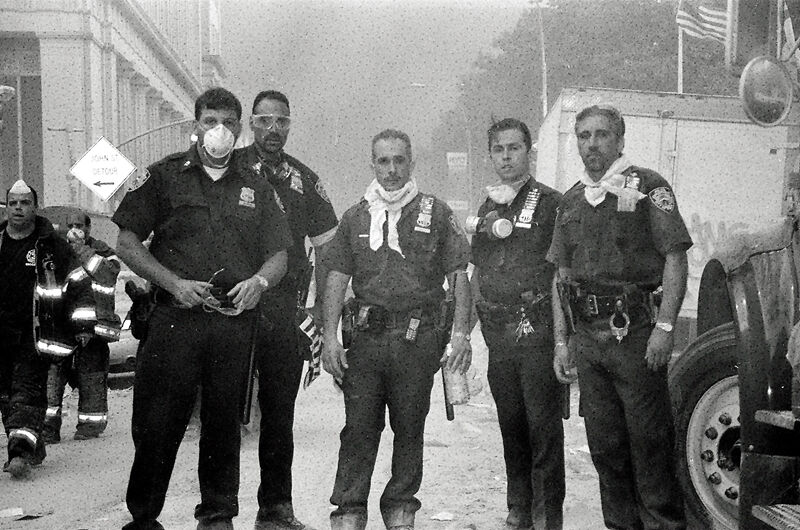 RECOVERY: A common refrain among police officers is that they're at their best when everyone else is at their worst, Patrick J. Lynch, the president of the Police Benevolent Association, said recently. For months after the Sept. 11 attacks, respite was nearly non-existent for his members, he said. Above, NYPD officers near ground zero. Photo courtesy of the PBA

Pat Lynch’s commute that cloudless, late-summer morning had not been much different than most others.

The drive to the Police Benevolent Association’s Fulton St. offices from his Queens home on the Long Island Expressway was, typically, slowed by bottlenecks as he approached the Midtown Tunnel.

And then the world changed.

“I looked off to the left and saw basically the World Trade Center explode,” he said.

Helping, Anyway They Could

Mr. Lynch, then two years into his tenure as PBA president, merged into the HOV lanes and stepped on the gas pedal. “The radio started crackling like crazy,” he said of police communications. Shouts of “10-13”—police code for "officer needs help"—were incessant by the time he emerged on the East Side.

Alongside waves of NYPD patrol cars barrelling downtown, he made it to the World Trade Center. He was standing at the corner of West and Liberty Sts. when United 175 slammed into the South Tower.

“It was just complete chaos,” with hearsay running rampant, Mr. Lynch said during a recent interview. Rumors were that armed terrorists were also in the vicinity.

“And of course, looking up at the towers, not being a firefighter, just saying, you know, 'how are they going to put out that fire? It’s so high,'” he said.

He was standing with two other officers, partners Glen Pettit and Scott Nicholson. All three soon went different ways, looking to help however they could.

Minutes later, the South Tower swayed, “moved, bent forward towards the river,” settled back to center and then began to collapse on itself, Mr. Lynch recalled. “We all just ran into the corners, get as many people as possible, wherever you can find some kind of safety,” he said.

Dust and debris crashed, soot and smoke enveloping anyone nearby. Mr. Lynch pulled his bullet-resistant vest over his face. “It was as if someone was taking baseball-sized, handfuls of dust and throwing it down your throat,” he said. “You did the best you could and wherever you landed, you landed."

Officer Pettit, a Navy veteran and member of the Police Academy Video Production Unit who had recorded a PBA conference just days before, had gone into the South Tower.

'They Went in Anyway'

The rest of that day, and good portions of those that followed, was marked by turmoil and confusion. Still, for all the surreality, the gravity of the morning was apparent. “You kind of did whatever needed to be done at the time,” Mr. Lynch said.

He was soon riverside, getting people onto harbor launches to head across the Hudson and relative safety.

Such was the conviction of police officers and others that they could be living their last day, that they were approaching a nearby clergyman, asking for absolution. “That’s a sign, saying they know they may not come out,” he said. “They went in anyway.”

Further confounding the situation is that communications, especially telephones, went down. “There were a lot of police officers that were just trying to get messages home to their family that they’re OK, because you can imagine it’s on TV,” Mr. Lynch, his voice weighted with emotion, said.

He had nothing to write on, and so out a dollar bill. He was grabbing cops, asking “ ‘What’s your number? What’s your mother’s name? What’s your husband’s name?’ And just taking their numbers,” and relaying that information to colleagues at Fulton St., who then made the calls.

“We started just make-shifting,” he said.

In the ensuing days, Mr. Lynch received a list of officers the department knew were missing.

“Then you would just walk the site and gather cops together and read out the names like, you know, kind of standing on whatever was there and say, ‘Quiet down guys, gather around just so you know who it is we’re looking for,’ and you’d read off the names and as you were reading off the names...you would hear the cops in the group just all of a sudden, say, ‘Oh s---. I know him.' 'Oh crap. I know him.’ ‘Oh man, I know these guys,’ ” he said. “So it kind of gave clarity to the police officers. Yeah, we're digging for people but we're also digging for our own.”

He still has those sheafs of paper. 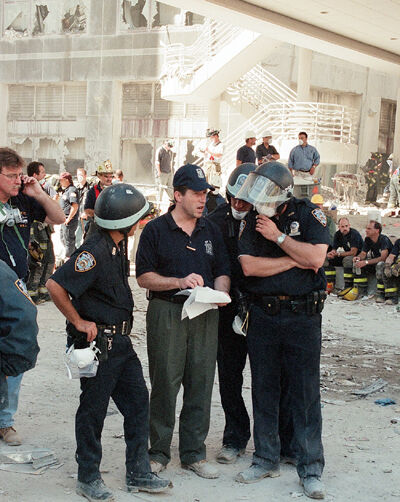 'KEEP TELLING THAT STORY': Patrick J. Lynch was two years into his tenure as president of the Police Benevolent Association on Sept. 11, 2001. He and his union colleagues were at the site when the towers collapsed. For months, Mr. Lynch and other PBA officials returned every day before daybreak. Their tasks there were manifold. The mission now, he said, is to not let the collective memory fade. Above, Mr. Lynch, center, confers with officers shortly after that morning regarding colleagues who went missing. Photo courtesy of the PBA

He would be at the site for months, most days starting before daybreak, traveling back and forth from ground zero to police headquarters, to Staten Island and to the city morgue and then returning to the site. “We would do that circle constantly, checking in, bringing information, getting information,” he said.

Calls in the Night

Respite was infrequent. Back at home in the evening, Mr. Lynch would receive calls during the night announcing a recovery, “and you get right back in the car and go back to the site.”

Such was the ongoing task that a sense of clocked time dissolved, he said. “Everything just melded into one. There was no day and night. That was just recovery.”

Still, despite the confusion, the sorrow and the anger, there was also diligence, dignity and resolve. There was also unity, among cops and firefighters and tradesmen, certainly, but also among residents.

“You would go down 12th Avenue and there were hundreds and hundreds of people cheering,” Mr. Lynch said. And that collective gesture, he said, “brought a unity that I've never seen before and unfortunately I haven't really seen after.”

Among all the tokens, large and small, some were singular. Near the Brooklyn Battery Tunnel, “there was a woman there, and she handed out a baloney sandwich, a baloney on bread, regular old bread. “You knew that she had to do something. And she did what she could. She went into a refrigerator and took out her lunch, made a sandwich of it and started handing it to anybody that came by.”

'The Story is Us'

In those days and weeks and months, that spirit, which Mr. Lynch said had a blue-collar pedigree, prevailed, particularly among cops.

“If you had a skill, you brought it,” he said. “Police officers are working-class people, it's just that we have that same process in us and we bring what we know to the table. And that table became pretty big with everybody's skill.”

But despite the immensity of the task and of an exceptionally challenging recovery that consumed that dark fall and winter, The Job, as it’s known, has somehow grown more thankless, he said. That could be a symptom of a desire to move on from catastrophe, Mr. Lynch suggested.

“I think our mission now is to tell the story because the story is us, all these stories,” he said. “Individual police officers, individual workers that were on that site, you know, no one's writing down those stories. So we’ve got to tell them.”

Not Easy to Move On

He said he encourages everyone who was present at the site that day to tell their story, “as large or small as it was,” as a gesture of respect and acknowledgement.

“For many of our members, there is no September 12th,” he said. Too many have fallen ill in the aftermath.