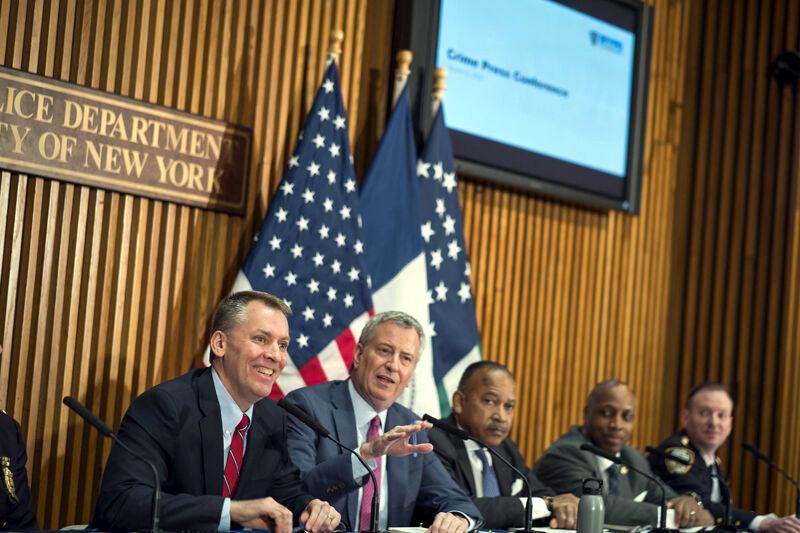 ADDRESSING THE PAST, LOOKING FORWARD: Mayor de Blasio, second from left, and NYPD Commissioner Dermot Shea, left, noted the Police Department’s explicit role in perpetuating racialized law-enforcement when the city released a draft policing-reform plan earlier this month. Both police unions and watchdog organizations expressed disappointment with both the process and the outcome. Above, Mr. Shea, Mr. de Blasio and other police officials during a March 2020 crime statistics briefing. Photo courtesy of Ed Reed/Mayoral Photography Office

Citing the long-fraught relationship between communities of color and the NYPD, Mayor de Blasio recently released a draft policing-reform plan that, among other things, cites the need to “change culture” by increasing transparency and accountability and promoting “reconciliation.”

Among the plan’s objectives are the elimination of unnecessary force and the need to recruit officers “who reflect the communities they serve” by bringing on more women and people of color.

‘We Must Go Further’

In a note accompanying the first part of the draft plan’s release earlier this month, Mr. de Blasio cited, somewhat generously, his administration’s outsize role in reforming the NYPD’s stop-and-frisk policy and promised to build on that outcome.

“Now, we must go further to confront the harmful legacy of racialized policing. These reforms will restore trust and accountability to create a police force that reflects the communities they serve—all while keeping New York City the safest big city in America,” he said.

“As I said in a recent speech to community leaders in Harlem, there is a history in this country that goes back hundreds of years involving the enforcement of unjust laws and racist policies of society. Police have been an inexorable part of that history,” he said. “Our challenge today is to ensure that we will not participate in, or tolerate, any further inequality or injustice. We have engaged in years of steady reform and we must continue.”

The plan is ostensibly a response to an executive order issued by Governor Cuomo last June that directed municipalities to adopt policing-reform road maps by April 1. It now will be subject to a public-comment period and, likely, City Council hearings, after which it will be revised.

The administration’s plan followed by just over two weeks a slate of reform initiatives prepared by the City Council intended, Speaker Corey Johnson said, to “reduce the NYPD’s footprint.”

The administration’s draft considers several objectives, including increased transparency and accountability that it will look to achieve through officer discipline and a strengthened Civilian Complaint Review Board with expanded powers.

The department will also double down on neighborhood policing by working with communities to confront gun violence and immerse officers in the communities where they work.

In a nod to last summer’s protests against police misconduct, which themselves resulted in sharp criticisms of the NYPD and several lawsuits, including one by the State Attorney General, the plan also noted the need to improve policing of demonstrations.

The administration said the plan grew out of discussions with hundreds of city residents from all walks of life, including from clergy, advocacy, youth and business groups, community-based institutions, disability organizations, as well as with crime victims, prosecutors, judges and academics. The administration also solicited input from both uniformed and civilian members of the NYPD.

But Lou Turco, the president of the Lieutenants Benevolent Association, said the administration had not reached out to police unions. “They didn’t ask for my input, they don’t want my input,” the 30-year cop said.

He was particularly dismayed about what he said was the administration’s weak efforts to address how the department responds to incidents involving persons with mental-health difficulties--in police parlance, emotionally disturbed persons.

Involving officers using current practice amounts to an invitation to fail, and sabotages efforts at neighborhood policing, Mr. Turco said. He said a recently begun pilot program by which Emergency Medical Service and mental-health professionals are dispatched to some incidents that  formerly involved the NYPD was insufficient. “This is just a Band-Aid on a problem they don’t want to deal with,” he said.

He also criticized the administration’s decarceration efforts, which he said had contributed to a rise in violent crime dating to the start of last year. “We’re being set up to fail,” Mr. Turco said. “We’re engaged in catch-and-release with criminals. That needs to be addressed.”

The president of the Police Benevolent Association, Patrick J. Lynch, whose relationship with the Mayor has been acrimonious from the first days of Mr. de Blasio’s tenure, was pointedly dismissive of the administration’s effort.

“New York City police officers are already laboring under a two-decade-deep pile of supposed ‘reforms’ that do nothing to help us keep New Yorkers safe. Most of the proposals in Mayor de Blasio’s latest report can be thrown on that pile. But one bit of absurdity stands out: The Mayor says he wants to ‘enhance positive reinforcement’ in the NYPD,” the union leader said in a statement. “Police officers aren’t waiting for a pat on the back from the same elected leaders who are constantly denigrating us and actively undermining public safety.”

Communities United for Police Reform was equally unimpressed with the draft plan, calling it a sham document shaped not by community input but by the NYPD itself during “propaganda sessions” that shunned input from many stakeholder organizations, such as, presumably, CPR itself.

“This isn’t a plan that rethinks safety or policing–it's a PR plan for the police. There isn’t one recommendation in the report that will directly reduce police violence, lead to the firing of abusive officers, or reduce the NYPD’s outsized power or bloated budget, the executive director of CUPR’s Justice Committee, Loyda Colon, said in a statement.