61% Jump in Applicants For Long-Underrepresented Group Within Ranks 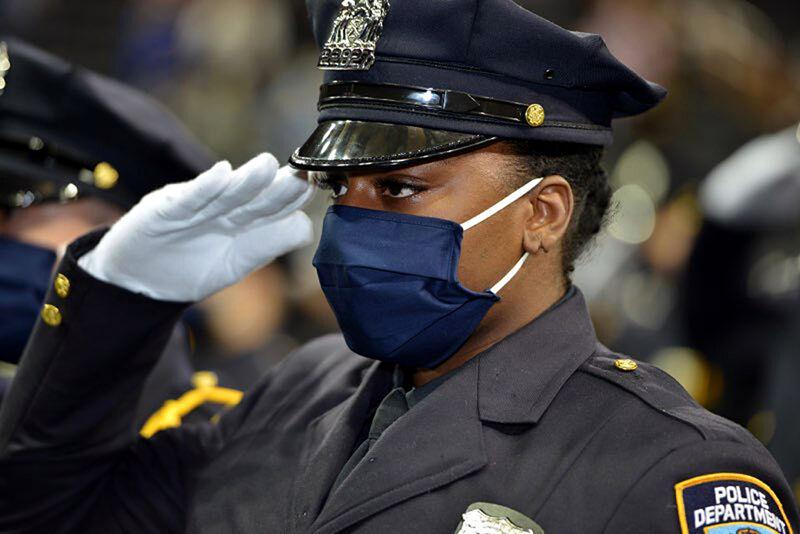 DIVERSIFICATION DRIVE: Significantly more black residents applied to become NYPD cops during a recently concluded recruitment effort. Department executives sought to increase applications from blacks, who are typically underrepresented within the NYPD’s uniformed ranks. The proportion of female applicants also increased. Above, a May Police Academy graduate. Photo courtesy of the NYPD

The NYPD's recent recruiting drive yielded an outsize response from black residents, gratifying department executives who had made it their mission to increase interest from what has typically been a reticent segment of the city's population.

Slightly over 29 percent of the 14,502 applicants for a written exam that begins next month were black, an 11-percentage-point increase, on average, from the four most-recent recruitment periods.

Blacks have proved difficult to recruit and have traditionally been underrepresented within the NYPD’s uniformed ranks. Speaking during a May 18 press event detailing the drive’s outcome, First Deputy Commissioner Benjamin Tucker, who is black, said that was in part “because of their experiences” with police.

And, he added, that “as time moved on,” black young men found they had other options and opportunities, such as college, “so there was some competition for what was already a truncated pool” of potential applicants.

While Mr. Tucker, harkening back five decades to when he joined the NYPD, said that some of the same issues prevail today, the department's reform and reinvention efforts appear to have struck a chord with youth. “They see that the NYPD is heading in the right direction,” he said.

A study published in the academic journal Science in February that combed through 2.9 million patrol assignments by Chicago police over four years found that Hispanic and black officers made “far fewer stops and arrests” and were less likely to use force than white officers, particularly against blacks. The authors concluded that “diversity reforms can improve police treatment of minority communities.”

And a policy assessment on “recruitment, diversity and retention” in policing by the Council on Criminal Justice released May 20 found that increasing officer diversity “should result in a police workforce that is less likely to engage in racially disparate policing.”

Commissioner Dermot Shea said diversity within the department is “incredibly important,” and became even more so following the death of George Floyd and the protests that followed.

But the department was particularly determined to increase the number of black applicants, he said. “I would have been happy moving it up 5 percentage points; we moved it 11 percentage points. That is very significant," he said. “This was a targeted goal."

Chief of Department Rodney Harrison called that turnout the result of “a phenomenal effort.” He credited Captain Glorisel Lee, the department’s Commanding Officer for Recruitment, for setting up recruiting stations in those communities that house younger black residents who might have the most interest in a policing career.

All told, about 70 percent of the recent applicants identify as belonging to a minority, said the NYPD’s Chief of Personnel, Martin Morales. And female applicants made up 31.8 percent of the recruitment pool, a 4-percentage point increase from recent averages, he said.

The recruitment drive, the NYPD's first in two years, was extended a week to May 4, with the city also waiving the $40 fee. Although the drive attracted about 1,000 fewer applicants than over 47 days in 2019, it did so in just in 27 days. The daily average of about 425 applicants represented significantly more than the 350 daily applicants during the four previous recruitment periods, Chief Morales said.

While the president of the Police Benevolent Association, Patrick J. Lynch, said he was supportive of the department’s recruitment efforts, he called for new officers to be better paid.

“We fully support the NYPD’s attempt to recruit from the diverse communities we serve. Our neighborhoods are full of the talented, motivated recruits we need. But New York City’s best and brightest also know they could have more money and less stress doing another job—even another policing job. If our city would just support its police officers and pay us a salary on par with other local cops, they wouldn’t need to extend filing deadlines and waive test fees.”

The last PBA contract expired nearly four years ago, with the union and city scheduled to engage in an arbitration process that has been delayed for 13 months so far by the restrictions the pandemic placed on face-to-face presentations.

The proportion of NYPD executives and chiefs who are black has increased in recent years and includes several who are women. Besides Deputy Commissioner Tucker and Chief Harrison, they include Chief of Patrol Juanita Holmes, Chief of Transportation Kim Royster and Chief of Community Affairs Jeffrey Maddrey.

Mr. Tucker thanked recruits and “for being the change, for joining us and signalling your desire to make a difference to contribute to meaningful public safety here in this city.

“This couldn't be more positive for us.”

Mr. Shea cautioned that the recruitment period was only a start. “There’s a lot of work to do” to ensure that those who applied for the test go on to become recruits sworn in as officers in the coming months and years.

To that end, Chief Holmes dispensed this advice: “Keep your nose clean, stay out of trouble,” she said. “We need you.”