PBA to O’Neill, de Blasio — ‘We have no confidence in you’ 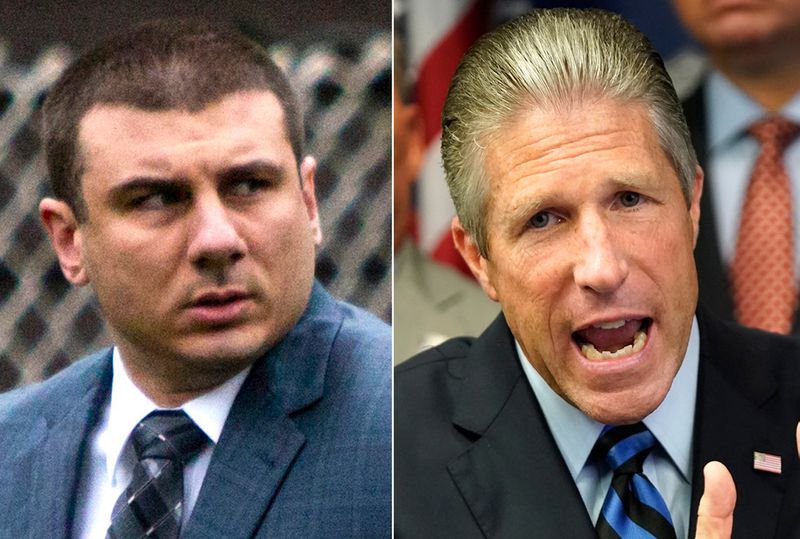 The city’s largest police union dished out a double whammy Wednesday: no confidence votes for Police Commissioner James O’Neill and Mayor de Blasio in the wake of firing of Officer Daniel Pantaleo for his role in the chokehold death of Eric Garner.

The unanimous no-confidence resolutions by the roughly 400 delegates in the Police Benevolent Association called for O’Neill to resign and Gov. Cuomo to remove de Blasio from office — but since the votes are purely symbolic, it’s unlikely either event will occur.

“Today’s votes are an unequivocal indictment of our failed leaders in City Hall and One Police Plaza," Lynch said. "For years, Mayor de Blasio has demonized police officers and undermined our efforts to protect our city. For years, Commissioner O’Neill has cravenly acquiesced to the mayor and his anti-cop allies.

“The unjust termination of ... Pantaleo was merely the final straw ... Neither can hope to regain the trust or confidence of New York City police officers. They must resign or be fired,” Lynch added.

Mayoral spokeswoman Freddi Goldstein called the vote “another attempt by the PBA to divide our city and we won’t stand for it.”

“Under this mayor and Police Commissioner, our officers and the communities they serve are closer than ever and the city is the safest it’s ever been,” she added. "That isn’t changing.”

Pantaleo was fired Aug. 19 by O’Neill. The commissioner, in an emotional statement, expressed sympathy for Garner and for Pantaleo, saying he might have taken the same actions as the plainclothes cop on the fateful day Garner died.

After O’Neill fired Pantaleo, Lynch said — and the NYPD confirmed — that there had been behind-the-scenes discussions that would have allowed the disgraced officer to resign and save his pension. Those talks fell through, and Lynch said it certainly looks like the mayor forced O’Neill’s hand.

Lynch also told the rank and file that officers needed to rely on each other and that police brass would not have their back the next time there is a controversial incident.

He told officers to follow the Patrol Guide to the letter, urging them to call for a supervisor whenever they encountered someone who was resisting arrest, as Garner was when police tried to bust him for selling loose cigarettes on a Staten Island street on July 17, 2014.

Such calls would almost certainly result in a slowdown of activity, and in the week after Pantaleo was fired, arrests and criminal summonses dropped 27% and 29%, respectively.

Chief of Department Terence Monahan, speaking at a press confidence before the PBA announced the no confidence vote, acknowledge the drug in arrests for minor offenses but said cops were as busy as ever last week taking guns off the streets and responding to 911 calls about violent crimes.