Police unions announced that they’ll try to intervene in Attorney General Letitia James’s lawsuit against the NYPD on Thursday, arguing the city and department will not adequately defend cops in court. 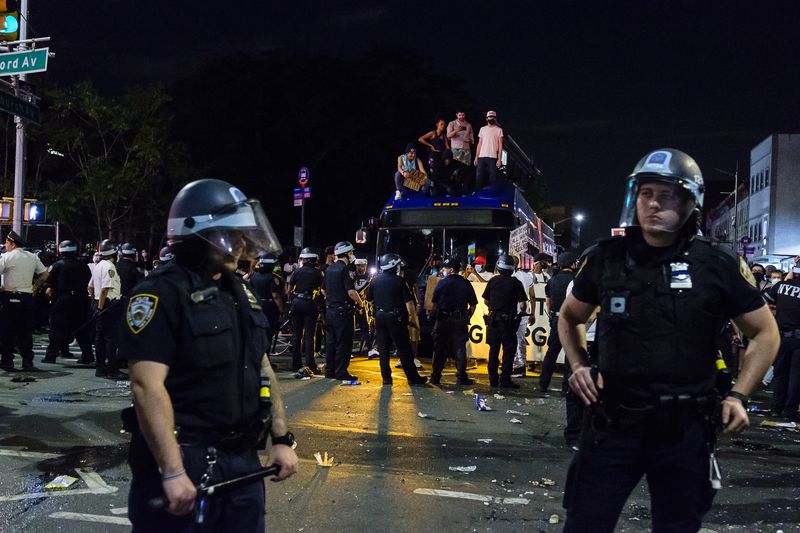 Demonstrators protesting the death of George Floyd taunt NYPD officers and pelt them with bottles, cans, rocks and fireworks at Bedford and Church Aves. on May 30, 2020. (Jeff Bachner/for New York Daily News)

James sued the NYPD in January, asking a court to impose new reforms on the department due to serial use of excessive force on what she called “overwhelmingly peaceful” protests in the summer sparked by the killing of George Floyd by Minneapolis cops.

Manhattan Federal Judge Colleen McMahon will rule on the unions’ request to assume a formal role in the lawsuit and defend members’ interests.

“They sent police officers out with nothing but mixed messages and no support, then tried to blame us for their failures,” Police Benevolent Association President Pat Lynch said in a statement. “We have zero confidence that the city will provide that perspective or adequately represent police officers’ rights.”

“No inquiry into last summer’s protests will be complete without looking at the experience of the police officers on the street,” Lynch added. “We were besieged: On one side, we had violent criminals who used the protests as cover to attack police officers, ultimately injuring more than 400 of us. On the other side, we had city leaders who failed to plan and prepare for the type of violent demonstrations that already been happening around the country for days.”

De Blasio’s announcement followed a court win over the repeal of state law 50-a, which added to the unions’ sense that cops are under siege.