By ELIZABETH KEOGH and JOHN ANNESE 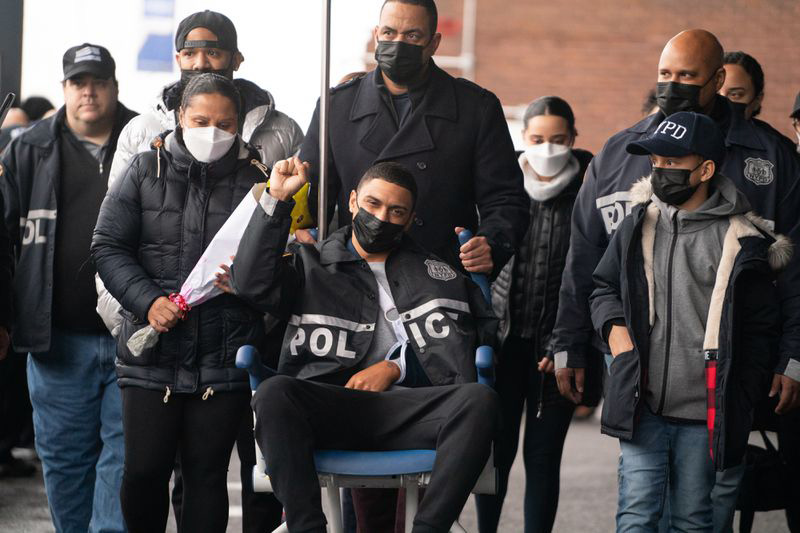 An off-duty cop who by mere inches dodged being shot dead at the hands of two would-be carjackers left a Queens hospital in good spirits Thursday.

“I’m feeling good,” Manuel Soto, 22, told reporters as he was wheeled with his family at his side to a van that took him from Jamaica Hospital. A lone bagpiper played as 100 members of the NYPD clapped, whistled and cheered.

The rookie cop assigned Brooklyn’s 63rd Precinct was on his way to work Tuesday night when two men approached his car on Beach Channel Drive and Beach 62nd St. in Arverne, Queens.

Katherine McKenzie, the trauma medical director and attending surgeon at Jamaica Hospital, said Soto should have a speedy recovery after the bullet hit his clavicle.

“Potentially there’s a lot of things that can happen there. It’s close to your chest, close to the vessels in your heart,” McKenzie said. “If the bullet had followed a slightly different path there could’ve been a very different outcome.... He should have a good recovery after a little bit of time.”

Soto is the sixth NYPD officer shot this year — a tally that includes officers Jason Rivera and Wilbert Mora, who were killed by an armed ex-convict while responding to a domestic violence call in Harlem Jan. 21.

“He’s happy. He’s been happy since he got here when he got the word that he will be okay. He went through a number of surgeries and he’s a strong young person,” Police Benevolent Association President Patrick Lynch said.

Two men, Chad Collie, 19, and Jayare Robinson, 18, were arraigned in Queens criminal court Thursday on attempted murder and other charges in the shooting.

Collie is accused of firing three shots at Soto, who returned fire as the duo fled. Collie then shot at two officers in uniform about three blocks away before he and Robinson were arrested, police said.

Both men were ordered held without bail.