Democrats who sponsor those bills said Tuesday they expect members of both the state Assembly and Senate to begin discussions on the legislation in the coming weeks after having little movement on the measures during the first three months of this year’s legislative session. 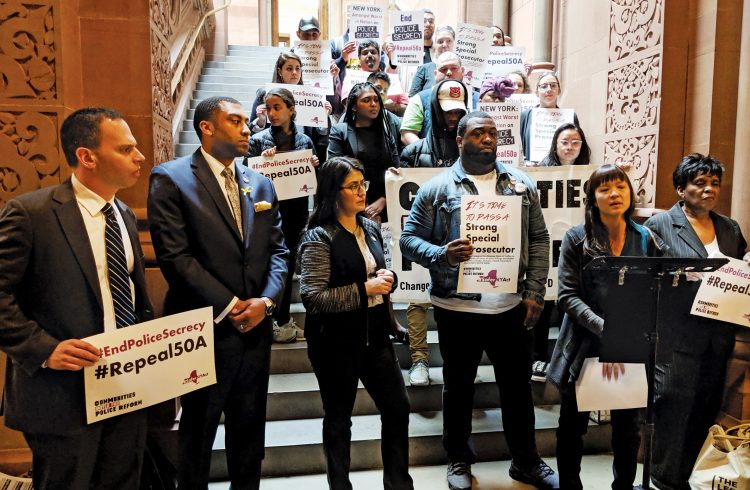 Lawmakers and advocates rally in Albany for a set of reforms related to information on law enforcement. Photo: Dan M. Clark

New York state lawmakers are pushing for a new set of reforms they argue will provide more accountability over members of law enforcement by making the personnel records of those officers available to the public and tracking data on arrest and criminal patterns across the state.

New York state lawmakers are pushing for a new set of reforms they argue will provide more accountability over members of law enforcement by making the personnel records of those officers available to the public and tracking data on arrest and criminal patterns across the state.

The legislative package is opposed by the New York City Police Benevolent Association, which said on Tuesday the legislation would create a system where information could be taken out of context or used to harass members of law enforcement.

Democrats who sponsor those bills said Tuesday they expect members of both the state Assembly and Senate to begin discussions on the legislation in the coming weeks after having little movement on the measures during the first three months of this year’s legislative session.

Among those Democrats was Bronx State Sen. Jamaal Bailey, who sponsors legislation to repeal section 50-a of the state civil rights law. The statute has been used by members of law enforcement to withhold personnel records, including reports of alleged misconduct, from public view.

Bailey said lawmakers were preparing to dive into discussions on the bill after spending much of the last three months behind closed doors negotiating the state budget, which passed at the end of March.

The same has been true in the Assembly, Democrats in the lower chamber have said. Members haven’t had the chance to sit down and discuss the bill, which they always do before it’s moved from committee to the floor for a vote. It’s currently assigned to the Codes Committee in the chamber, where it’s sponsored by Assemblyman Daniel O’Donnell, D-Manhattan.

Assembly Speaker Carl Heastie, D-Bronx, didn’t offer a position on the legislation when asked Tuesday about its chances of passing the house, instead deferring to the members of his conference.

“We haven’t conferenced it yet, so I’d have to get back to you on it,” Heastie said.

That’s expected to happen in the coming weeks, but Assemblyman Dan Quart, D-Manhattan, suggested the legislation would also gain support among his colleagues with a push from New York City Mayor Bill de Blasio, who has not, so far, advocated for the law’s repeal.

A spokeswoman for de Blasio did not immediately return a request for comment on the legislation.

The other bill, which gained traction this week, would require the state to collect and publicly report the total number of arrests and tickets for violations and misdemeanors, as well as the demographics of those individuals, including race, ethnicity, and sex. The bill, sponsored by state Sen. Brad Hoylman, D-Manhattan, cleared the Codes Committee in the Senate on Monday.

“New York cannot truly claim to be a progressive state so long as we have a criminal justice system that disproportionately impacts marginalized communities, including LGBTQ New Yorkers and people of color,” Hoylman said. “We need to fundamentally rethink the way police departments engage with the communities they serve.”

Hoylman has advocated for the bill, known as the Police STAT Act, as a way for the public to collect data on the activities of law enforcement statewide. That would promote accountability of those officers, Hoylman has argued, when discriminatory patterns are identified. It could also serve as a stepping point for lawmakers to craft additional legislation involving members of law enforcement.

The main opposition to both pieces of legislation has come from the NYC PBA, which has argued the proposals would create a structure in which individuals would have no context for certain information and possibly use it to harass members of law enforcement.

“Both of these bills are designed to produce reams of context-free data that activists can twist to serve their anti-police narrative,” PBA President Patrick Lynch said in a statement to the New York Law Journal on Tuesday.

Enforcement statistics, which would be collected under the Police STAT Act, would have “little value” if they’re not presented alongside patterns of community complaints or other conditions in neighborhoods where enforcement is taking place, Lynch said.

He was also critical of the legislation to repeal 50-a. The union has traditionally argued that the law should remain as a way to protect the personal information of officers from beings used against them by individuals seeking to harm or harass them. Repealing the law could open those officers to new threats, Lynch argued.

“Broad disclosure of the false or unsubstantiated allegations in a police officer’s confidential personnel file would serve only to smear that officer’s reputation and derail any court proceeding in which he or she is even tangentially involved,” Lynch said.

O’Donnell, who’s carried the legislation to repeal 50-a in recent years, has said his bill would not reveal the personal information of officers, only the cases of misconduct that have been levied against them. He said the legislation is intended to correct what he said was a misinterpretation of the statute by state courts.

“The bill was written with the innocent purpose … [that] the way the courts have interpreted 50-a was wrong, it wasn’t what was intended. It wasn’t intended to keep the people from knowing information about people on the police force and the correction agencies,” O’Donnell said. “These are government employees and we as the people should have the right and the information to know about their disciplinary records and history.”

The New York Court of Appeals, for example, said in a decision late last year that 50-a allowed the New York City Police Department to withhold certain disciplinary records from public disclosure. Lynch sided with the decision at the time, and cautioned lawmakers again on Tuesday against moving away from its interpretation.

“Before the Legislature embraces this concept of ‘transparency for transparency’s sake,’ they should consider whether it accomplishes anything other than the further demonization of the women and men who protect New York State,” Lynch said.