Mayor de Blasio, first lady tout pilot project with no plan or even a name 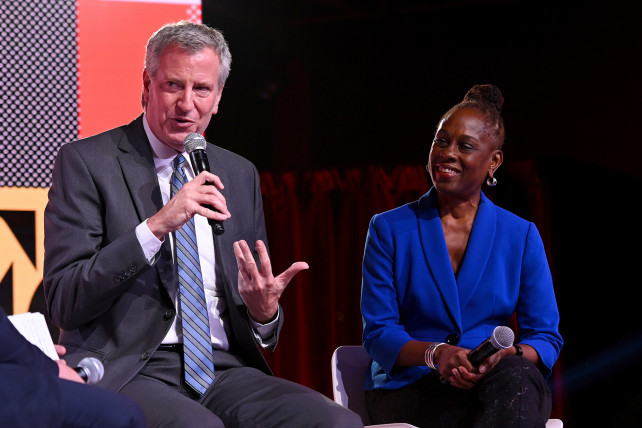 It’s a new pilot project without a plan — or even a name — being overseen by New York City first lady Chirlane McCray’s embattled billion-dollar ThriveNYC program.

Mayor Bill de Blasio and his wife revealed scant details of the new unnamed mental-health initiative in front of the cameras Tuesday, only saying the plan is to divert calls about emotionally distressed New Yorkers away from the NYPD and to newly formed teams of specially trained workers.

Yet neither the mayor nor McCray could say which two neighborhoods the project will target first when it starts in February or when it might be rolled out citywide.

The pair also failed to reveal how much the project will cost or how many workers it will involve.

City Hall did not respond to The Post’s questions on even these basic details.

Instead, the administration sent out a press release involving the new “Mental Health Teams," with McCray saying, “Treating mental-health crises as mental-health challenges and not public safety ones is the modern and more appropriate approach.

“That is because most individuals with psychiatric concerns are much more likely to be victims or harm themselves than others,” added the first lady — the face of the city’s widely panned $1.25 billion ThriveNYC mental-health-care program.

The idea behind the project is to help de-escalate tensions between the NYPD and communities over cops’ handling of mental-health calls by taking police out of the equation altogether for most such 911 emergencies.

ThriveNYC — which has been accused for years of failing to properly detail its spending or how it is meeting its main goal of connecting the mentally ill with services — “will provide programmatic oversight for this pilot,” the press release said.

Most recently, ThriveNYC also has been accused of being virtually AWOL amid the city’s homeless crisis.

A law-enforcement source, referring to the new program, seethed to The Post, “This is all smoke and mirrors, just the latest sham known as ThriveNYC.

“I guess [the mayor] sees this as another way to take every last penny from the city before he leaves. I just hope he leave himself enough to get a MetroCard when he leaves City Hall.”

“Police officers know that we cannot single-handedly solve our city’s mental-health disaster, but this plan will not do that, either,” police-union President Pat Lynch said in a statement. “It will undoubtedly put our already overtaxed EMS colleagues in dangerous situations without police support.

“We need a complete overhaul of the rest of our mental-health-care system so that we can help people before they are in crisis, rather than just picking up the pieces afterward.

“On that front, the de Blasio administration has done nothing but waste time and money with ThriveNYC and similar programs. We have no confidence that this long-delayed plan will produce any better results.”

FDNY dispatchers will decide when to call these special teams to scenes instead of cops, the city said. If things look violent, then the NYPD will get involved, officials said.

The project was revealed a little over a year after the mayor announced a related, never-launched pilot program involving teams of cops and mental-health workers responding together to scenes.

That program, announced in October 2019, failed to get off the ground because of COVID-19, the administration told The Post on Tuesday.

“We’re still determining when and how best to launch the program,” a rep said in an e-mail.

The city said in the press release for the new plan, “This pilot represents a concerted effort by FDNY,[Health+Hospitals], [city Department of Health and Mental Hygiene], the NYPD, and the Mayor’s Office of ThriveNYC to move towards a more health-centered approach.”