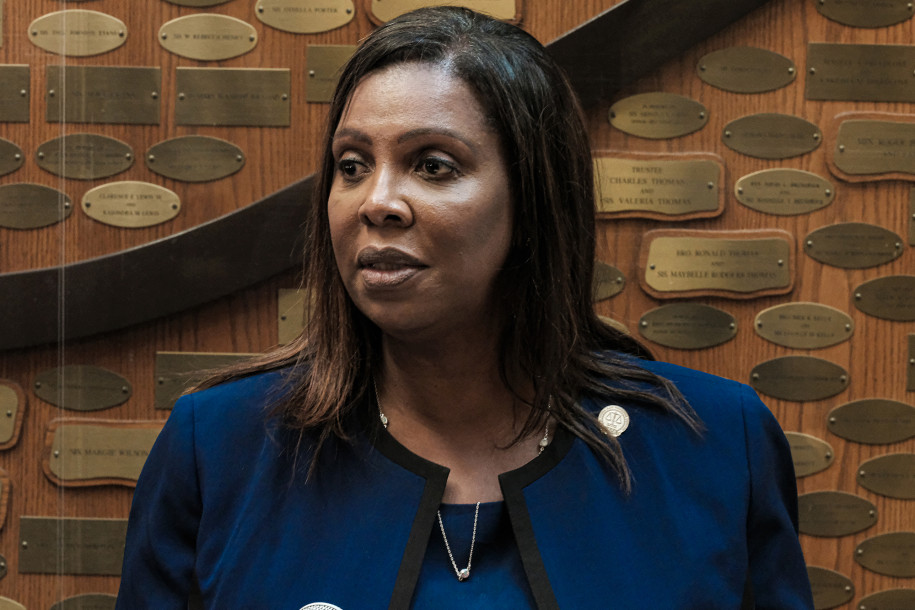 The NYPD’s top brass failed to stop its “inadequately trained officers” from repeatedly violating the civil rights of New Yorkers during the George Floyd protests, according to a new lawsuit from the state attorney general that also takes aim at Mayor Bill de Blasio.

The rare lawsuit, brought by New York Attorney General Letitia James Thursday seeks systemic reforms in the NYPD and a monitor to be put in place in an effort “to end the pervasive use of excessive force and false arrests by the New York City Police Department against New Yorkers in suppressing overwhelmingly peaceful protests,” court papers filed in Manhattan federal court Thursday allege.

The lawsuit names Police Commissioner Dermot Shea and the highest-ranking uniformed cop, Terence Monahan, for their roles in overseeing the response, while a report by the New York City Department of Investigation stopped short of naming any officials at fault.

Throughout the months of protests “the mayor and police leadership … were aware of persistent NYPD actions to violently suppress the protests,” the suit charges.

At one point, in June, he told a reporter who observed the crackdown on the Mott Haven protests during a protest that “I believe that you believe what you’re saying.”

He added: “We had observers from City Hall who saw a very different reality.”

However, James’ report alleges that observers from his office were among those briefing him on the alleged civil rights violations by officers.

Throughout the protests, the Mayor and police leadership, on information and belief, were aware of persistent NYPD actions to violently suppress the protests through media reports; the CCRB’s public hearing; reports from staff, including the NYPD Internal Affairs Bureau and the  Mayor’s Community Affairs Unit.”

CAU staff were present at the Mott Haven protest, sources told The Post at the time.

Gothamist subsequently obtained emails showing that de Blasio’s staffers were among those kettled.

Yet, they didn’t discipline cops who engaged in misconduct, the court documents claim.

The suit claims that from May 28 to Dec. 11 police officers responding to largely peaceful protests “repeatedly and without justification used batons, fist strikes, pepper spray, and other physical force against New York residents at the protests.”

At a June 4 protest in Mott Haven in the Bronx where 250 people were arrested, even non-protestors — including legal observers, medics, and other workers performing essential services — were arrested, the court documents allege.

The cops allegedly used “kettling” to encircle protesters — instead of allowing them to peacefully disburse — and then made mass arrests, the court documents claim.

The violent breakup of the demonstration was decried by Human Rights Watch, which called the NYPD’s actions a violation of international human rights” and possibly US civil rights.

And despite the NYPD conducting new training on “disorder control” from July and October 2020, it “served only to reinforce the use of kettling and did nothing to address the practice of excessive force against protesters,” the court papers allege.

As a result the protesters — many of whom have never been arrested before — “suffered concussions, broken bones, cuts, bruises, and other physical injuries,” the court papers allege.

James said since May 30, her office has received 1,300 complaints and pieces of evidence on alleged police misconduct from the protests and she heard from over 100 protesters during the 3-day public hearing in June.

The NYPD allegedly has a two-decades long history of “unconstitutional policing practices,” at large-scale protests. Yet, the city, the NYPD, the police commissioner, the mayor and the NYPD Chief of Department still failed to properly train the force to “prevent this misconduct,” the suit charges.

“They failed the people of the City of New York,” James said. “New Yorkers have the right to peacefully and fairly protest … what we saw was legal rights and protections tossed aside.”

James’ office has been probing the NYPD’s response to the rampant demonstrations over the summer, concluding in a preliminary report in July that the department should be overhauled.

“I met with Attorney General James yesterday and we have a common goal: Continue to drive major police reforms,” de Blasio said in a statement. “I couldn’t agree more that there are pressing reforms that must – and will – be made this year, including the major discipline reforms announced with my Obama Foundation pledge, all 30 of the recommendations from the DOI and Law Department reports, and more,” the mayor continued.

“A court process and the added bureaucracy of a federal monitor will not speed up this work,” the mayor said. “There is no time to waste and we will continue to press forward.”

A NYPD spokesperson said, “The New York City Police Department welcomes reform and has embraced the recent suggestions by both the city’s Department of Investigation and the city’s Law Department.”

“As the Mayor has said, adding another layer does not speed up the process of continued reform, which we have embraced and led the way on,” the spokesperson added.

“We will say it again: what we witnessed in June was a failure of New York City’s leadership,” Lynch said in a prepared statement. “They sent cops out to police unprecedented protests and violent riots with no plan, no strategy and no support.”

“They should be forced to answer for the resulting chaos, instead of pointing fingers at cops on the streets and ignoring the criminals who attacked us with bricks and firebombs,” Lynch said.

The lawsuit comes on the heels of a Department of Investigation report that found the NYPD made “a number of key errors” that “likely escalated tensions” among protesters, who took to the streets over the police death of George Floyd in Minneapolis.

The NYPD is already under federal oversight for its use of stop-and-frisk, stemming from a 2013 lawsuit. A judge in that case ruled that the practice was unconstitutional and a form of racial profiling.

“Once again, elected officials come out with a one sided report that does not take into account the more than 400 men and women in blue who were injured during these so-called ‘peaceful’ protests,” he said. “City Hall and Albany politicians never had a clear plan or strategy other than to dangerously scapegoat the police. Those who wrote this report, have zero experience in policing a riot — and we certainly did not see them out there holding the line.”