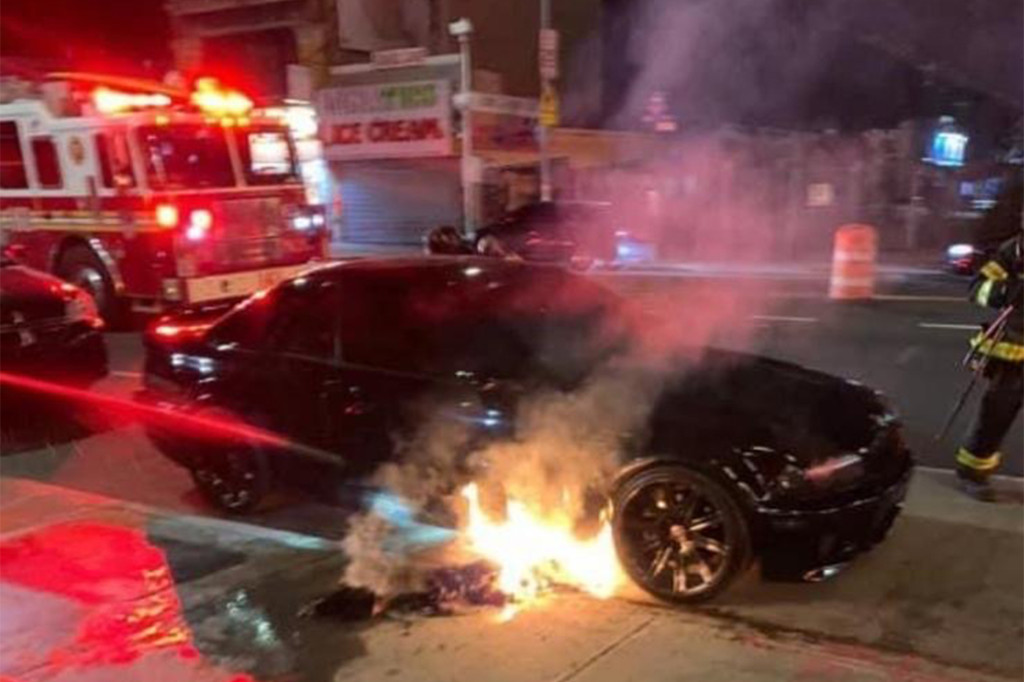 An NYPD officer's personal vehicle displaying a parking placard was set intentionally on fire in the confines of the 60th Pct in Brooklyn. PBA

An NYPD officer’s BMW was “intentionally set on fire” Tuesday night — and cops believe the car was targeted because of the police parking placard on its windshield.

A witness reported the car fire in front of the Coney Island-Stillwell Avenue subway station at 1223 Surf Ave. at around 9:30 p.m., police said.

After the FDNY extinguished the flames, cops discovered the vehicle was owned by an on-duty police officer who was working in a transit anti-crime post nearby, according to a department memo obtained by The Post. The 2002 convertible had an NYPD “restricted parking permit” displayed on its windshield.

The discovery prompted the Police Benevolent Association to warn its more than 20,000 members to take precautions when parking their personal vehicles.

“I am writing to remind all members of the ongoing threat of sabotage against our personal and department vehicles,” a memo signed by PBA President Patrick Lynch states.

“Yesterday in the confines of 60 Pct., an on-duty MOS’s personal vehicle, parked in the vicinity of the Transit District 34 command and displaying an NYPD parking placard, was intentionally set on fire by an unknown perpetrator.”

Lynch proceeded to warn members that they are “working in an extremely dangerous environment.”

“Remain alert and look out for your sister and brother police officers,” he wrote. “The greatest safety measure we have is each other.”

A police source said he was convinced the car was set ablaze because of the police parking placard.

“This s–t is crazy,” the source said. “They’re crossing the line. That car was parked at the command. It’s got the placard in the window. It says NYPD vehicle.”